With half a dozen players resting up after their exertions at Euro 2012, a further four set to participate in the football tournament at the London Olympic Games and a trio of centre-backs nursing injuries, Sir Alex Ferguson’s squad has been deprived of thirteen first-teamers as they embark on the first leg of their pre-season tour this week. An inconvenience in many respects (particularly with Rio Ferdinand being the only senior defender in the travelling party), the silver lining comes in the form of a fantastic opportunity for a number of United’s younger players to gain priceless experience and catch the manager’s eye as the Reds visit South Africa and China.

Nick Powell has received plenty of coverage following his summer transfer from Crewe, whilst the likes of Ben Amos and Kiko Macheda should be known to most by now, so we’re going to focus on the names that will likely be a little less familiar. Introducing….

Still only 19, the Preston-born stopper is a veritable tour veteran when compared to the other youngsters travelling, having enjoyed his first taste of life in the senior setup on last summer’s trip to the USA. Johnstone impressed for the reserves last season and will have benefited greatly from an up-and-down spell with Scunthorpe United in League One, while his international career has continued to progress with recent participation at the U19 Euros with England. Sam will very much be understudy to Messrs Lindegaard and Amos on this tour, but with a possible role as #3 keeper ahead of him this season, he’ll hope for a run-out at some point over these three games.

Perhaps the most surprising inclusion in the tour party. The former Switzerland U17 captain made the rare move across Manchester from our city rivals on January deadline day this year, inking a short-term deal with a view to earning himself a longer pact with United, but after seeing just 127 largely non-descript minutes of competitive action for the reserves many expected him to be moving on this summer. Not so, with a tour place seemingly confirming he’ll be part of the U21 setup for the coming season. Despite being touted as a central defender, Veseli’s limited appearances last term saw him operating at right-back, further forward on the right flank or in the centre of midfield. 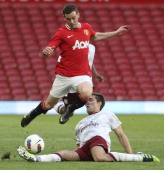 There were a number of more eye-catching performers in last season’s all-conquering reserve side but not many more consistent than Vermijl. The Belgian has been the very definition of solid since his arrival from Standard Liege in January 2010, his versatility, reliability and style of play – particularly in the full-back positions – drawing tentative comparisons with former Reds stalwart Denis Irwin. Whether the U19 international can ever match the Irishman for quality is obviously very much open to question, but with no senior full-backs making the trip and question marks hanging over both positions anyway, Vermijl has the chance to really stake a claim. 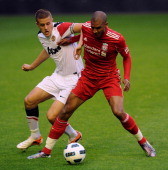 Much like fellow tourist Veseli, Wootton’s route to Old Trafford was far from a well-trodden path. Born and bred on Merseyside, the defender was on Liverpool’s books as a schoolboy and picked up England U17 honours whilst still with the Anfield club, but Rafael Benitez’s heavily foreign-focused youth recruitment policy at the time prompted Scott to reject the offer of a scholarship and instead sign for United after a successful trial. A physically imposing centre-back with sufficient quality on the ball to have been deployed in midfield at times, Scott captained the U18s in 09/10 before embarking on loan spells with hometown club Tranmere Rovers in 10/11 and, last season, stints at Championship strugglers Peterborough United and Nottingham Forest.

Very much the baby of the group and perhaps the most intriguing prospect. Much has been made of Zeki Fryers’ apparent defection to Spurs this summer, but one factor that has drawn little mention is the high regard fellow left-back Blackett is held in at Old Trafford. A fantastic athlete blessed who reads the game well and boasts an absolute rocket of a shot, the England U18 international is already significantly further on in his development than Fryers was at the same age. A member of the Youth Cup winning side of 2011 and leading appearance maker for the U18s last term, Tyler does have a frustrating knack of completely switching off from time to time but one only has to look at the only senior defender on tour to see how it’s more than possible to iron that out. Patrice Evra’s hold on the left-back position is unquestionably weakening, and while it may be too soon for Blackett to emerge as a realistic alternative just yet, the local lad could well prove to be the Frenchman’s long-term successor.

And then there was one…. The club’s memorable 2011 FA Youth Cup success was largely built on an outstanding trio of midfielders in the centre of the park, and while the now-departed Ravel Morrison and Paul Pogba were responsible for most of the flair and guile from the triumvirate, the drive and tenacity of Tunnicliffe was no less important. A genuine box-to-box midfielder who loves a tackle and has the clichéd great engine, the England youth international perhaps didn’t progress as hoped in 11/12, with an up-and-down loan spell with Peterborough United being followed up by a strangely out-of-sorts last few months of the reserve season. Nonetheless, players with Ryan’s determination and attitude are hard to find and many will be rooting for him to make an impression on this trip.

A local lad whose development over the past three years has been wonderful to track. Lingard’s football brain, quick feet and excellent technique have always been obvious but, at barely 5 foot tall and so slight it looked like his red shirt was almost drowning him, it was a rough start in the game for the young attacker, with even youth team defenders finding it easy to bully and kick him out of matches on a regular basis. The patience of player and club has been well and truly rewarded however – a testament to doing things the right way when so many English clubs don’t – as Jesse heads into this tour having arguably been the standout player for the reserves last season. 9 goals and 12 assists don’t tell the full story, as the teenager caught the eye in almost every game he played and – aided by something of a growth spurt – more than proved his ability to withstand the more physical side of the game. Comfortable on either flank or behind the striker, this under-the-radar prospect might just be one of United’s brightest.

To the delight of everyone who’s followed his progress keenly over the last few years, at last this gifted young Italian will get a chance at senior level. Acquired from Roma in 2008 (much to the chagrin of the Giallorossi), Petrucci arrived with the somewhat predictable ‘new Totti’ tag but was only able to display glimpses of his potential before growth-related injury problems struck and ruled him out for almost two full years. Many a young talent has been lost to the game after comparatively minor ailments at such an age so it’s to Petrucci’s great credit that he has battled back to show signs that he might still fulfil his vast potential. A preciously-talented playmaker most at home playing as a #10, Davide’s vision and eye for a pass make him a delight to watch. With a new contract seemingly in the bag, time for last season’s reserve skipper to shine on a bigger stage.

There will be plenty of attention on Robbie Brady following Sir Alex’s revelation that he will line up in the left-back slot in the opening game against AmaZulu, not least because the young Irishman has spent his United career thus far almost exclusively playing in an attacking role. The Reds saw off competition from a number of clubs to sign Brady from Dublin side St Kevin’s Boys at the age of 15 and he soon caught the eye for the academy with his performances on the left wing, proving a real threat with his direct running, crossing ability, set-piece prowess and eye for goal. A loan spell at Championship side Hull confirmed his potential as he shone for the Tigers in the first half of last season, and while he faded somewhat as the season wore on, continued excellence on the international stage has established him as the star of Ireland’s current U21 crop. Occasional experiments with Brady at left-back for the reserves have clearly persuaded the manager that he could have another internal candidate to address that possible problem position, and the youngster’s confident, almost cocky approach may just see him seize this opportunity with both hands.