Skip to content
Posted in Premier League By By Far The Greatest TeamPosted on November 15, 2012November 13, 2012Tagged Manchester United 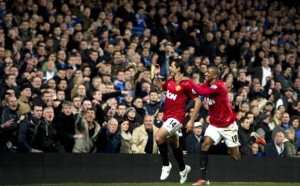 While the original baby faced assassin has quietly gone about to win a second league title with Molde, United’s current version has just helped them snatch victory from the jaws of defeat.

He had a storming start to his career at United; winning a championship medal by scoring 13 goals in 27 appearances in the league, and finding the net 20 times in all competitions in the 2010-11 season. In fact, he was the first United player since Ruud Van Nisterlooy to score 20 goals in a debut season. He scored in his first ever outing as a Manchester United player during pre-season, and in his competitive debut against Chelsea in the Charity Shield. With both Rooney and Berbatov usually dropping deep to get involved, it was useful for United to have a striker with a predatory instinct in the opposition penalty box to put to bed the chances created by their wing play.

His role as a super sub and positive impact on crucial games has inevitably drawn comparisons with Solksjaer. The latter always found himself in excellent positions to score a poacher’s goal and Chicarito is quietly going about doing the same. Important goals in the first season include the brace at the Britannia stadium, the winner against the Baggies, and the opener against Chelsea that virtually guaranteed United the title.

Unfortunately, his second season didn’t pan out the way everyone hoped it would and doubters were soon at it claiming that the successful first season was a fluke. He still managed 10 goals in 28 league appearances but saw his playing time dwindle as the season unfolded. Injuries and indifferent form as a result of lack of playing time attributed to this.

It seems now that he’s left that difficult second season behind and is now one of the form strikers in the premier league. He’s scored 8 goals in all competitions so far including the key brace against Villa and Braga in the space of a week. Despite starting most games on the bench, when called upon, he delivers a truly professional and effective performance much like Solksjaer. Chicarito hasn’t questioned the lack of starting opportunities and is eager to give his best when called upon. His game attributes has also improved, notably his awareness of the offside trap and increased shoulder strength which has helped him to hold on to the ball better and ward off defenders. Ferguson, impressed by Filippo Inzaghi’s ability to play off the shoulders and impeccable finishing, quipped “that lad must have been born offside”. If Hernandez masters this art, he could be one of the most lethal attacking players in Europe.

Hernandez provides more of a goal threat than both Young and Welbeck and should start ahead of them. When employing a diamond formation, Sir Alex can employ him up front with Van Persie while Rooney can play at the tip of the diamond. If fit, Kagawa can be rotated in the system to keep the legs fresh. Even in an orthodox formation with two up front, Ferguson can afford to drop Rooney and must do so to reward the in form Hernandez, else Real Madrid and the likes will be hovering about to pounce at the slightest hint of dissatisfaction. But given that a variant of the 4-2-2 or 4-3-3 will be used more often with Rooney starting, it is likely that we will see more starring cameos off the bench for United’s new baby faced assassin.