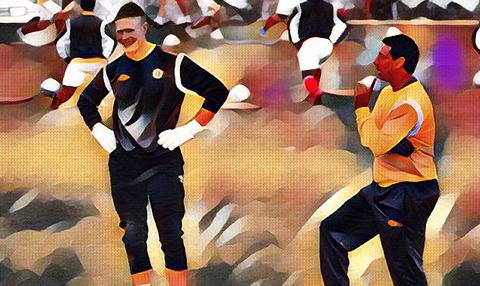 English footballers generally don’t leave their own domestic leagues. This is not counting other parts of the United Kingdom of course. While there are exceptions, the place you’d least expect them would be in South America. Peru has had its own. His name was Mark Cook and he was a goalkeeper.

Mark Cook was born in North Shields. He started his career at Newcastle, before going over to Hartlepool and then Gateshead. He didn’t travel very far in terms of clubs due to all 3 clubs being around the north of England. He also played at Harrogate which is still around the north. After that, he made the jump to Universitario in 2012 and was the most unthinkable transfer that could have happened.

Nolberto Solano was Universitario’s manager in 2012. Solano is obviously the most well-known Peruvians to people in the UK due to his efforts with several clubs within the country. Most notably with Newcastle. He was the one who brought Mark Cook into the team. Cook and Solano met each other in 2005. Mark left school and joined Newcastle in that year.

Solano mentioned in a Hartlepool training session a year prior about bring Mark Cook to Peru, which he thought was a joke at the time. A year later, Solano called to sign him for Universitario and then the English keeper knew it wasn’t a joke and accepted. His motivation for joining was the due to the weather in Lima as well as having a new challenge. He wanted a change in lifestyle.

Mark Cook joined in mid-season. He didn’t know too much about Peruvian football aside from what Solano had told him. He was told that Universitario is the biggest club in the country. However, not all was sunshine and flowers for the English keeper. He may have had the reference of a Newcastle legend, but he had financial issues.

To begin with, the club administration did not always pay on time. However, Mark had a bigger issue and that was that he didn’t know how things worked in Lima. It was almost like a culture shock. No one explained to him how to pay the bills as in Lima you have to go to the bank to do so, which he was unaware of at the time. To make things worse, he wasn’t getting very much playing time. However, the claims that he was without water and power for a long time were false.

Mark Cook couldn’t speak Spanish well either, as expected. He was taking private Spanish lessons and carried a dictionary everywhere he went. Nolberto Solano obviously was the main guy helping with communication as he could speak fluent English, but a few others were also able to help. The ones who could speak English were Werner Schuler and Aurelio Saco-Vertiz. Linking sentences together was Mark’s biggest struggle, but the English support from the others was what made it easier.

Despite some of his struggles, Mark really enjoyed his time in Lima. He loved the lifestyle and the beaches. He considered people very friendly. Travelling in Peru can be very tedious but it wasn’t a problem for Mark. As for everyone else in the city though, he considered the traffic to be absolutely horrendous. In terms of football, he didn’t play very many games as he was only a backup option but when he did play he says Peruvian football is of a good standard although not as physical as he is used to back in England. He left once Comizzo took over in 2013. To this day, Mark still follows Universitario as he loves the club. Since then, he has played for Blyth Spartans, Dunston and Newcastle Benfield.

Mark Cook may have not gotten much playing time but he will go down in history as one of the few English players to have played in Peru.