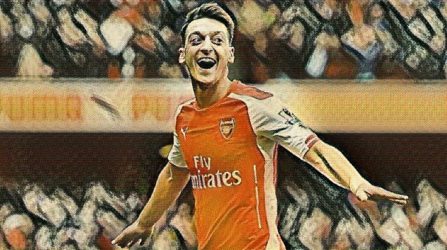 In the latest January transfer window, it was Arsenal who took the headlines. In their busiest January window since its introduction, they sold six players and recruited three. Selling the likes of Alexis Sanchez, Olivier Giroud and Theo Walcott while recruiting Pierre-Emerick Aubameyang and Henrikh Mkhitaryan. However, it wasn’t a transfer that was Arsenal’s best bit of business in January but instead a contract extension for Mesut Ozil. He put pen to paper on a three-and-a-half-year deal, ending recent speculation of a move away from The Emirates Stadium.

Ozil started his career in his home nation, Germany. He made his name with Schalke and Werder Bremen, showcasing his playmaking abilities. His performances for the clubs, particularly Bremen, eventually earned him a Germany callup. After impressing for his nation in the 2010 World Cup, he was sought after by the European big boys. The likes of Barcelona and Arsenal were rumoured to be interested in the German’s services. Eventually, Bremen agreed a deal with Real Madrid for the transfer of Ozil.

In his debut season for Real Madrid he finished the season with 25 assists, the most of any player in Europe’s top five leagues. The following season he won the league with Real Madrid, finishing with 17 league assists. On a personal level, he was nominated for the Ballon d’Or that season. In his final season in Madrid, he had tallied up 26 assists. With those numbers it’s no surprise that in the summer of 2013, Arsenal decided to go back in for Ozil and make him their main man.

During his time at Arsenal, he has tallied up 64 assists and 36 goals in 183 games. This includes an almost record breaking 15/16 season where Ozil managed 19 Premier League assists. A record bettered only by Thierry Henry. He’s also been instrumental to three FA Cup victories during his time in London. Since signing for Arsenal, Ozil has been very successful on the international stage too. Amassing an impressive 40 assists and 22 goals in 88 games for his national side. He was also a key figure in the Germany side that won the 2014 World Cup. While his figures are superb, Ozil is a player who can’t be defined simply by statistics. He’s so much more than that.

A superbly technical player, Ozil has all the traits you’d hope to find in a world class playmaker. Vision, control and passing are skills that he has in abundance. His ability to frequently play perfectly-weighted passes into fellow attackers is wonderful to watch. His delivery from set pieces is also nothing short of sensational. It’s no wonder he tallies up so many assists.

Selflessness is a trait you’ll struggle to find in the modern game, however Ozil displays it frequently. Despite often being one of his sides most talented players, he never appears individualistic. His assists prove this but watching Ozil makes this point clearer. Often deploying decoy runs or dummy passes to allow room for teammates. This selflessness was particularly apparent at Real Madrid, playing alongside Cristiano Ronaldo.

Ozil can play in numerous systems. Under Jose Mourinho at Real Madrid he displayed his abilities in a counter attacking system. He was a figurehead in attack alongside Cristiano Ronaldo in a devastating frontline. Ozil’s decision making on the break is remarkable along with his ability to stretch a team wide. This creates space for the likes of Ronaldo who are very much capable of capitalizing from Ozil’s delivery. Ronaldo and Ozil’s linkup play was key to them winning the Spanish League in the 11/12 season. Mourinho has since expressed his admiration for Ozil’s style.

“Ozil is unique. There is no copy of him – not even a bad copy.”

Ozil has also shown his abilities in a possession-based side too. Both Arsenal and Germany are renowned for their possession-based football. Albeit different styles of possession football, Ozil remains crucial to both sides. His vision allows him to play the ball in and around the box. Equally as important is his control. His first touch allows for fluid passes between teammates without slowing down play.

The German National Team recognize Ozil’s influence in the side. Since the introduction of Germany’s Player of the Year award back in 2010, he has won the award five times. Former teammates of Ozil are also quick to acknowledge his abilities.

“Probably the most brilliant footballer we have or ever had”.

Mario Gomez’s comments on Ozil show how highly his teammates rate him, particularly his national teammates.

Primarily known for his assists and playmaking, Ozil is also capable of producing goals. While shooting isn’t necessarily his greatest asset, he has scored some wonderful goals. His goal against Ludogorets in the 16/17 Champions League was video game-esque, as Ozil himself described it. The audacity to flick the ball over the goalkeeper, dribble past two defenders before slotting into an empty net was wonderful. In that moment, Ozil displayed his wonderful calm and collected style.

Despite Ozil’s capabilities as a playmaker, he still has his critics. Frequently criticized for his ‘lazy’ approach to the game. Pundits such as Paul Merson often claiming he doesn’t show enough ‘passion’ or ‘desire’ as appose to analysing his game. It’s bizarre to think people would want Ozil, with his lack of physicality, defending. As his teams’ playmaker and focal point, you want him ready to attack on your opposition while your teams more defensively capable players win back possession. Labelling Ozil as ‘lazy’ is ironically lazy analysis.

Few players divide opinion to the extent of Mesut Ozil. However, his contributions for club and country simply can’t be ignored. Neither can the compliments he receives from his former teammates and managers. While he isn’t necessarily underrated, he’s certainly understated. He’s far too often used as a scapegoat. If Ozil isn’t regarded as one of football’s greats upon his retirement, that would be nothing short of a tragedy.