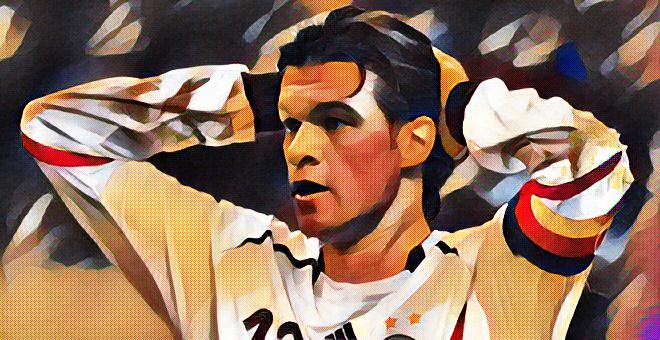 Michael Ballack, the stereotypical German midfielder, strong, efficient, technically good and doesn’t give up. A man who took on a role as captain and acted as a role model for younger players, like Sami Khedira and Bastian Schweinsteiger. A player who had a physical presence that would impose fear upon his opponents and teammates love having on their side. A man who won a lot, but unfortunately missed out on so much more.

Ballack started his career at Chemnitzer FC and experienced relegation in his first season with the club. During the following season, Ballack claimed a first-team place as Chemnitzer attempted to return to the 2.Bundesliga. Ballack scored an impressive 10 goals and highlighted his desire to succeed. That caught the attention of Otto Rehhaagel, who just got his Kaiserslautern side promoted back to the Bundesliga.

Ballack made 16 appearances for his new side Kaiserslautern in a history making year for German football. Kaiserslautern became the first club in German history to win the Bundesliga following promotion from the 2.Bundesliga. The following season, Ballack pegged down a first-team spot and played 30 games, scoring four times. His physical presence at a young age stood out as Kaiserslautern battle their way to a 5th place finish and made it all the way to the quarter-finals of the Champions League; where fellow Bundesliga side Bayern knocked them out.

That following summer saw Bayer Leverkusen invest in Ballack’s’ services, spending €4.1 million to bring him to the BayArena. Coach Christoph Daum decided to move Ballack from a deeper ball winning midfielder to a more attacking midfielder, using his physical stature to his advantage. Due to Ballack’s’ range of passing, sublime technique and all round intelligence, this move was the making of Ballack. During his first two seasons, Ballack scored five and nine respectively, but it was the season 2001-02 that really put him on the map.

Playing with a bunch of talented footballers in their own right, Lucio, Ze Roberto, Oliver Neuville and Ulf Kirsten; Ballack started to blossom in his new attacking midfield role, scoring an incredible 23 times in 50 appearances. The season itself though didn’t come with a fairytale ending; Leverkusen found themselves runners-up on three separate occasions. They missed out on the Bundesliga title, one point behind Dortmund, lost in the DFB-Pokal final 4-2 against Schalke and to top things off, lost 2-1 to Real Madrid in the Champions League final. Although, it was ‘that’ goal by Zinedine Zidane that beat them.

Due to this brilliant individual season that Ballack had, Bayern decided to spend €13 million to make him the ideal replacement to veteran Stefan Effenburg. Ballack instantly commanded a place in the Bayern team and was influential in their Bundesliga title and DFB-Pokal wins. With Ballack’s trademark powerful shot, he notched 15 goals in his first season in Bavaria. Things continued in a similar fashion at Bayern scoring 11, 20 and 16 respectively, winning the league and cup doubles in the final two years. Meaning during this four-year period, Ballack won the Bundesliga and Pokal in the same season three out of four years.

At the end of the 2006 season, Ballack signed for Premier League rich boys Chelsea on a free transfer, the Bundesliga had lost a warrior, an engine, a leader. Ballack had done it all at Bayern except in Europe, where critics often accused him of ‘choking’ in the big European games. Ballack would go on to continue to win domestically at Chelsea but once again never making that jump into European winners.

After his time in England, Ballack returned to Bayer Leverkusen in the later stages of his career. Now played deeper, his pace had started to go and after a few nasty injuries sustained at Chelsea, he wasn’t the physical engine the Bundesliga once saw. His game was now about protecting the defence and playing precision passes to form swift attacks. A very different player to whom left eight years earlier.

His international career will go down as the leader throughout a poor German era, he carried the side during the German transition period, eradicating the old style into the new, young model they have today. 2002 saw another final defeat, this time it was thanks to the Brazilian magician Ronaldo in the 2002 World Cup Final. Four runners up medals all within a few months, that takes some character to come back from that. He then took on the captaincy for Germany as the brilliant Oliver Kahn stood down. He led a poor Germany side to the semi finals where they lost to eventual winners Italy. However, the Germans did manage to grab 3rd place, beating Portugal.

Euro 2008 was Ballack’s last tournament and he was at the heart of some of the younger generation coming through, the likes of Schweinsteiger and co. He helped the Germans reach the final this time and they were almost there, except this was the start of Spain’s rise. Fernando Torres scored the only goal in the final and Ballack once again saw defeat. The signs were good for Germany though as the the development of youth was their long term plan.

Ballack missed the 2010 World Cup due to an ankle injury caused in the FA Cup final, this gave Germany to put faith in the new generation that was coming through and the world started to take notice of the Germans once again. He achieved a brilliant international record of 98 games and 42 goals. For Ballack, the likely hood of him getting to another tournament was very slim. Subsequently he was never called up to the national squad again and after months expecting him to retire, the DFB announced he wouldn’t play a part in the German nation team again. He was offered the chance to play in friendlies to take his total international appearances to 100 but Ballack refused, feeling he had been disrespected by DFB.

Ballack was a complete midfield, incredibly versatile and whatever job you needed him to do, he could do it effectively. His physicality stood him out a machine, someone who you dreaded to face off against. His heart and desire to win and succeed was his greatest strength but possibly his downfall too. Could you argue that his over ambition and determination could sometimes lead to mistakes? Regardless, he was a truly brilliant player of his generation and one that carried a nation through multiple international tournaments and one the fans lived for. He will be remembered as a Bundesliga and German great.