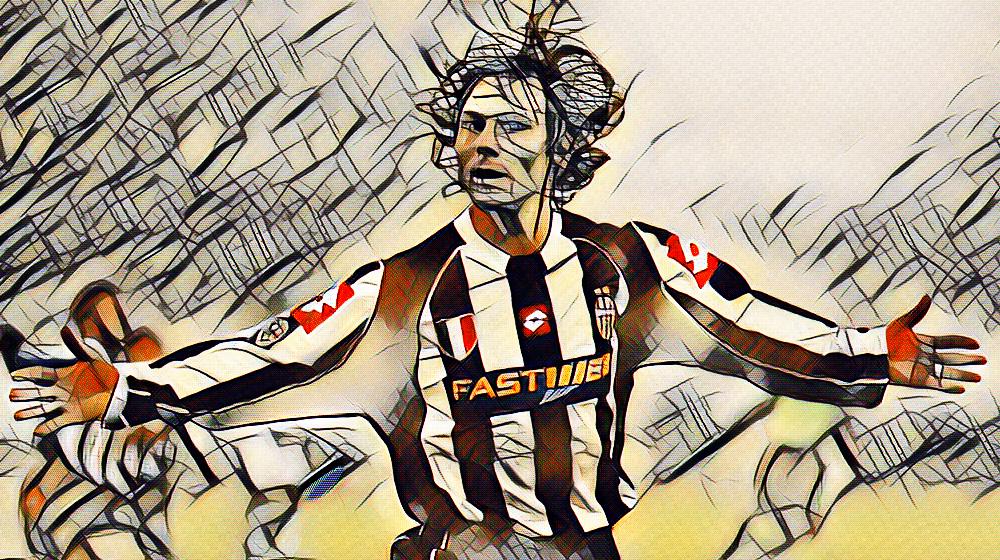 The lead guys on this site have, for some reason, allowed me another weekly slot. I have no clue why they have allowed me to do this, especially with the topic I will be writing about, as I’m a Birmingham City fan so we don’t really know what good football is. Jokes aside, this new weekly slot will be me talking about my footballing legends of the modern era. Although the majority of the article will be a profile on the player, I will try not to bore you too much and explain why they are a legend to me and why they had such an impact on my love for football growing up. I don’t know how many I will end up doing but I quickly drafted a list up and there were over one hundred names so be prepared as this may be a long journey. Right, enough of the boring introduction stuff, let’s get straight to the first player.

The player I have decided to open this series up with is probably the most influential footballer on my love for football, not just because of how good a player he was, but also his calm personality. I’ll give you a few hints to who it is, and hopefully, you’ll guess the name before I say it. He comes from the Czech Republic. He can play attacking midfielder, but he was definitely more known for his play out on the wing. His career was mainly based in Italy, playing for both Lazio and Juventus. Did you get the name yet? Well if you haven’t then here it is, Pavel Nedved.

Nedved was born in Cheb and raised in a nearby town known as Skalna. Now, as an expert on Czech towns, I can say Nedved wasn’t in the most popular town and so he would have found it difficult to get proper exposure in a footballing sense. Once again, jokes aside, I obviously know nothing about Czech towns and have probably offended a lot of people. He played for a few sides within the Czech Republic and was actually at a club who was run by the army and completed military service whilst playing for this club as well as getting his first professional contract with the club.

In 1992, Nedved earned a big move to Sparta Prague. He had a fruitful spell in Prague, winning a Czech First League title and a Czech cup. His performances in Prague didn’t go unnoticed and in 1994, he earned his first call-up to the Czech National team. He continues to play immensely and he earned a spot in the Czech Euro 1996 team. Although the team didn’t do that well, Nedved was world class and his goal against Italy in the group stages earned him a move to Italian side Lazio.

This was the big moment for Nedved. He earned a move to a massive side in Italy and if he could produce the performances he had been, then he would be picking any club in the world to go to. The funny thing is, and I think this is why I like him even more, he never thought that way. He was always so focused on the now rather than the past or future, which most players nowadays seem to be focused on.

He made his league debut for Lazio in September 1996 in a 1-0 away defeat to Bologna. After his first season was over and he had cemented himself as an integral part of the team, he ended up helping Lazio to a twenty-four game unbeaten streak in his second season. In the same season, Lazio went on to win the Coppa Italia and they reached the final of the UEFA Cup. They started the following season by winning the Supercoppa Italiana, with Nedved getting the first goal of a 2-1 win over Juventus. He played a major role in Lazio’s road to the last ever Cup Winners’ Cup, scoring throughout the tournament and scoring the winning goal, and what turned out to be the last ever goal in the tournament, in the final against Mallorca.

Nedved became one of the highest paid footballers in Italy, and you could see why from his performances. He helped Lazio to a league double in the 1999/00, they also won a second Supercoppa Italiana in 2000. After signing a four-year contract in April 2001, he was then sold to Juventus in the summer of 2001.

After a ton of speculation of where Nedved would end up. He chose to stay in Italy and play for the biggest club in the country. He spent a total of nine years with Juventus, playing two hundred and forty-seven games, scoring fifty-one goals during his time. When he joined Juventus, he was supposed to be the replacement for Zinedine Zidane, and it’s hard to argue that he didn’t replace him. He was such an influential player for Juventus, in a time where they had one of the best squads in world football.

He was part of the team that was involved with the Calciopoli match-fixing scandal, which had Juventus relegated from the Serie A. Whilst most of his teammates left the club, Nedved stated his intent to stay at the club and help them back to the top. He was then caught up in more controversy when his reckless tackle broke Luis Figo’s fibula and many fans turned against Nedved.

He won multiple league titles and came runner-up in the Champions League. In 2009 he called it quits on his career and he received a hero’s farewell in Italy.

Instead of typing all of his honours out and explaining them I will just leave a list below of his personal honours. One that I have to pick out is that Pele chose him as one of the top one-hundred players of all time, now that’s one hell of an accolade.

Nedved was an old-school winger. He wasn’t one of these flashy wingers from today’s era just like Neymar etc. He wouldn’t need step-overs and flicks to beat defenders, he was always one or two steps ahead of the defender. He would mentally beat them, making them think that they had read him and then he would read their read. It was amazing to watch, especially if you understood the process behind it.

The other thing that really stood out during his career was the fact he didn’t have a weaker foot. Wingers in today’s time seem to be amazing with one of their feet but really struggle to use the other, this wasn’t the case with Nedved. He could hit the ball perfectly with both feet, and I think this is why he caused so much trouble for defenders, they didn’t know which foot he would use.

He never scored tap-ins either. I must have seen 90% of his goals over his career and I would say about 15% of them are inside the box. The number of absolute thunderbolts he has scored is unreal, and this was the thing that really stood out to me as a young kid watching him.

Why He Means So Much to Me

Now, onto why he is probably my favourite player of all time. There are a few points that I want to get across so I apologise if they are drawn out as I become possessed when I write about football.

The first point I want to make out is that my first ever football shirt was a signed Pavel Nedved Juventus shirt. I can’t remember a day I didn’t wear it. The guy was the first real footballer to get me into the sport. Obviously, I had the old Birmingham teams that made me love football and hate football, but Nedved was the player who really got me into international football and made me realise I want this to be the centre of my life.

As a kid, I loved playing football, I wasn’t the best, let’s put it that way and I blame my love for Birmingham on that. But, I always wanted to be a good player. I had a fairly powerful shot and that’s what pulled me to Nedved in the beginning, and you’ll see this type of player across the majority of the series. Seeing someone on the big stage smashing in thirty-yarders for fun really motivated me and I wouldn’t be sitting here today, talking about football without my initial love for Nedved. Unfortunately, health issues came into my later life and stopped me from playing football and that’s why I have to talk about Nedved and not play in his honour. Although, I doubt I would impress him, more offend him, if anything.

I think the other factor for my love of Nedved and why he is a legend in my eyes, is because he didn’t get a lot of media attention. Obviously, the media wasn’t anything like it is today but, even then he never went out of his way to go into the media and try to gain the love of fans, he let his game and skill do that.

The one thing that really bugs me about Nedved, and this isn’t about him personally, but he never gets a mention in people’s conversations about the best wingers of all time. When people talk about the best wingers, the standard names come up. David Beckham, Ryan Giggs, George Best. Even looking at recent times, Messi and Ronaldo get into the conversation but Nedved never does. The amount of times I have brought him up in a conversation and people have gone, ‘Yeah, but did he do it in England?’ is ridiculous. In my mind, he is one of the most underrated wingers of all time and unfortunately, he will disappear from fans brains for good in a few years, thanks to all these flashy wingers of today.

I think the reason this bugs me so much is that I’m not a typical teenage football fan. I would rather watch the old-school wingers who knew how to use both feet and whip in a pinpoint accurate cross to a towering striker who hammers it home with a bullet of a header. I genuinely think I am a fifty-year-old man trapped in a nineteen-year olds body.

That’s where I am going to leave the legacy of Nedved for today. I hope everyone has enjoyed this and, hopefully, this has brought Nedved to attention again. Pele doesn’t pick you in his top one-hundred of all time for no reason and I think that should play in everyone’s mind. I just hope I have presented Nedved with the upmost respect as he deserves it and thank you, Pavel, for making football special to me. I’ll see you next week for a different type of legend, that’s all I can say.