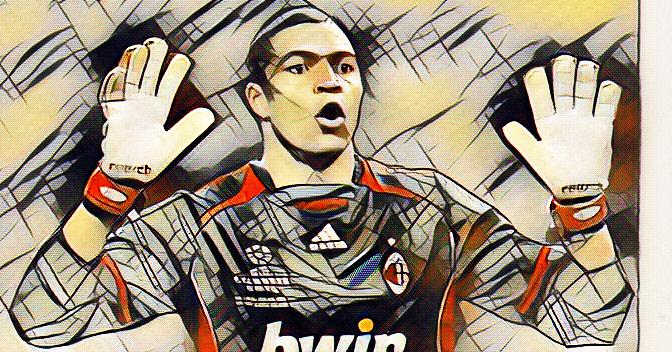 Welcome back to Modern Era Legends where I look at my footballing idols from the past couple of decades and try to explain why they’re a legend to me and how much they meant to my footballing life growing up. Last week I had the pleasure to look back on the fantastic career of Pavel Nedved and this week I have something a little different in store.

Dida, whose name was Nelson de Jesus Silva, was born in the city of Irara in the northeast Brazilian state of Bahia. Interestingly, when Dida was growing up he wasn’t interested in football, he regularly played volleyball with his brothers. He fell in love with football when he first played futsal and his preferred position was goalkeeper, even though the position is very unpopular in Brazil. The country even has a long history of discrimination against black players playing in goal.

Dida didn’t let this affect his love for the position and as a fan of Brazilian club Flamengo, he helped form an amateur squad called Flamenguinho, meaning ‘little Flamengo’. He actually took the playing name Dida from revered Flamengo striker Dida who he admired from an early age.

Dida started out at, now defunct, side Cruzeiro de Arapiraca and after enjoying a decent two-year spell with the club, he joined the youth academy of his hometown club, Vitoria. After impressing in the FIFA World Youth Championship, Vitoria decided to give Dida the number one shirt for a season before he joined Cruzeiro. This was where Dida shone in Brazil, he made one-hundred and twenty appearances over a span of four seasons and won countless state titles, including the 1996 Copa do Brasil and the 1997 Copa Libertadores. This was where he caught the eye of clubs in Europe and he publicly said he wanted to test his skills over in European football. After moving around a couple times more in Brazil, he finally earned his big European break when AC Milan signed him in 2000.

This is where Dida made his claim for being one of the best goalkeepers to grace the pitch. He enjoyed an incredible eleven years at the club and in that time made his name known around the entire world.

He enjoyed a decent first season, trying to beat his two other goalkeeping teammates to become the first-choice keeper. However, he was caught up in a false passport scandal and suspended by the Italian FA, so AC Milan had no choice but to send him back to Brazil, specifically to Corinthians. He was recalled by the club the season after and was put as a reserve keeper for the 2002-03 season. He got his big break when he was made first choice keeper by Carlo Ancelotti after Christian Abbiati suffered an injury. He went on to make thirty appearances that season, ending in Milan finishing 3rd in the league and being a part of the second-best defence in the league that season.

After the Champions League win, Dida was awarded Serie A’s award for the best goalkeeper of the season and he didn’t stop achieving after this brilliant season.

The 2003-04 season was one of the best for AC Milan as they went on to win the Serie A, UEFA Super Cup and the following season, thanks to them winning the league, Dida and Milan added a Suppercoppa Italiana to their trophy cabinet.

AC Milan went a little quiet after this season and didn’t enjoy the best of form or luck. However, Dida still impressed throughout these seasons and continued to grow as one of the best goalkeepers of his generation. It wasn’t until the 06-07 season where AC Milan got back to winning ways. The season before, Dida was awarded FIFPro Goalkeeper of the Year and was in the FIFPro World XI, so there was a lot of pressure on his shoulders to see if he could continue the form he was in.

Dida helped AC Milan to one of their best seasons in a long period of time. They went on to win the Champions League for the second time in Dida’s stint at the club, this Champions League win was then followed up by a UEFA Super Cup and a FIFA Club World Championship. They were the last trophies Dida won at AC Milan before he left in 2010. He went back to play for a few Brazilian clubs and finally retired in 2015.

Dida accumulated a stunning total of ninety-one appearances for his country, he represented his country at youth level and also represented Brazil at the Olympics seventeen times. This was where my love for Dida first took place as he was a breath of fresh air in a Brazilian side who it was popular to love for their attacking play.

Whilst playing for Brazil, he lead them to a Copa America, in 1999, a FIFA World Cup in 2002 and won two FIFA Confederations Cup with Brazil, in 1997 and 2005. In my opinion, he earned his name when playing for Brazil and he was a shining example for aspiring black Brazilian players, that no matter what people say, you can always achieve what you want to achieve.

Why I Consider Him A Legend

If you read my previous piece, you know the backstory of my footballing career growing up, it was going quite well until a medical problem appeared and I was forced to stop playing. Well, I was a goalkeeper growing up and instead of looking at the generic idols of my generation, the likes of Edwin Van Der Sar and Gianluigi Buffon, I always seemed to connect with Dida. He just stood out from the normal mould of a goalkeeper, he was athletic and almost a sweeper keeper which never really took control until the generation of goalkeepers now.

It was also refreshing to see a Brazilian actually enjoy playing in the goalkeeper position and not look like he was forced there just so the national team had a goalkeeper. I felt like I was already out of the norm of my generation who enjoy flashy skillful players who always seem to be on Soccer AM’s Showboat so I couldn’t really relate that much to them loving the old Brazilian teams but when Dida came about it was like I could relate to them.

Don’t get me wrong I love skillful players and you’ll see a ton of them in this series but I always seemed to prefer the players who went unrecognised when playing the hard-hitting, dirty positions of football. Dida obviously didn’t go unrecognised as he was inducted into the AC Milan Hall of Fame, but goalkeepers, generally, don’t get the praise when their team wins.

Another factor to consider is that Dida was an icon and a beacon of hope for young black players in Brazil. Just because the majority of the country had outdated views on certain people this didn’t stop Dida from becoming a Brazilian icon and in my opinion, the Brazilian players of today, the likes of Neymar and Dani Alves, owe their careers to Dida and what he managed to do.

Hopefully, once again, I have managed to show Dida’s career in the best possible way and hopefully, you can understand why he was such a legend to me growing up. Next week’s piece will start a three-part mini-series where I give my opinion on who was the best out of Frank Lampard, Steven Gerrard and Paul Scholes, see you next time.