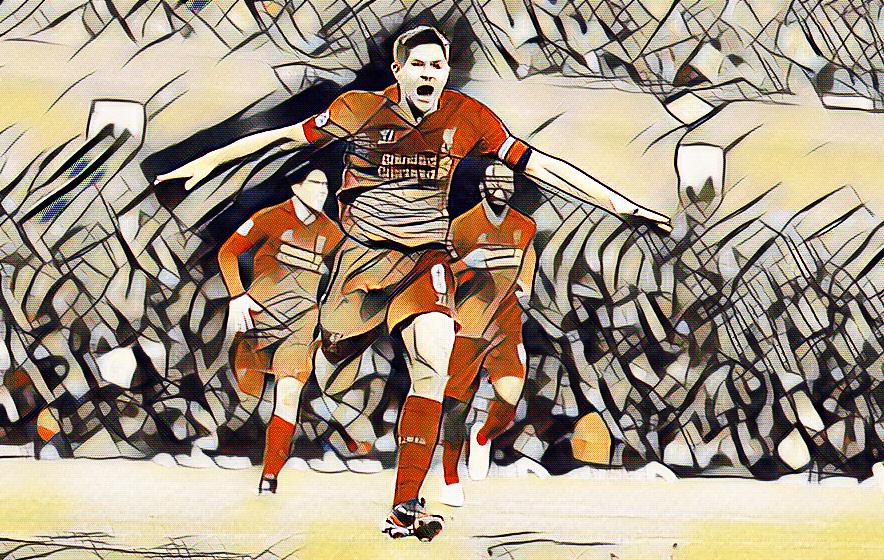 Welcome back to another instalment of Modern Era Legends, the series where I go back over the last couple of decades and highlight the careers of personal heroes and football legends. Today’s piece brings a sort of mini-series into the main series. I mentioned at the end of my last piece that I would be answering the age-old question, who was the better player out of Steven Gerrard, Paul Scholes, and Frank Lampard.

To start off the series, I will be looking at a Liverpool legend, a one club hero that young football fans should look up to as an idol and role model. That man is Steven Gerrard.

Gerrard was born on 30th May 1980 in Whiston, Merseyside. He was scouted by Liverpool at the age of nine when playing for a local team. He had trials at multiple clubs when he was fourteen, however, he wasn’t successful in them and he stayed at Liverpool. One of the teams he had a trial at was Manchester United and Gerrard once said that he only went there to put pressure on Liverpool giving him his Youth Training Scheme contract. He ended up signing his first professional contract with Liverpool on 5th November 1997.

Gerrard made his first team debut on 29th November 1998 in a Premier League match against Blackburn as a last-minute substitute. He went on to make thirteen appearances in his debut season, constantly filling in for the ever-injured Jamie Redknapp. He occasionally appeared on the right wing, but everyone knew he was destined for that defensive midfield role.

In the 1999-00 season, Gerrard began to regularly partner Jamie Redknapp in central midfield. He started the Merseyside Derby on the bench and then replaced Robbie Fowler late on in the second half. He ended up receiving his first red card minutes later when he snapped Kevin Campell in half. He also got his first goal in this season, when he managed to find the net against Sheffield Wednesday in a 4-1 win. However, his season was cut a little short after a reoccurring back problem.

He went onto make fifty appearances in all competitions in the 2000-01 season. It was a highly successful season for Liverpool as they went on to win the FA Cup, League Cup, and the UEFA Cup. Gerrard received the PFA Young Player of the Year award for his contribution. He would add to his trophy cabinet the season after as Liverpool went on to win both the FA Charity Shield and the UEFA Super Cup. In March 2003, Gerrard would get his first taste of a final goal, when he opened the scoring, in a 2-0 win over Manchester United in the League Cup Final.

After impressing for a year as Liverpool’s vice-captain, he was promoted to club captain by then manager Gerard Houllier. Houllier reckoned he had brilliant leadership qualities but he needed to mature to reach his full potential.

After a trophy-less 2003-04 season, Houllier resigned and it was widely thought Gerrard may take the chance to jump ship. He rejected a £20 million offer from Chelsea and stayed on with Liverpool and new manager Rafa Benitez.

Early on in the 2004-05 season, Gerrard suffered a foot injury against Manchester United and was out until late November. He returned and scored against Olympiacos in the Champions League to secure Liverpool’s place in the knockout stages. However, his return wasn’t the best and in the 2005 League Cup Final, Gerrard scored an own goal that lead to Chelsea winning 3-2 after extra time, this wouldn’t be the first time Gerrard cost Liverpool a trophy.

That season was historic for football in general as ‘That Night In Istanbul’ happened. Liverpool were 3-0 down against AC Milan in the 2005 Champions League Final. In six minutes of the second half, Liverpool drew level, with one of the goals coming from Gerrard, to force the tie to extra time. Extra time ended and still no winner so it went to a penalty shootout. Liverpool miraculously won the shootout 3-2 and won the Champions League.

Gerrard was having contract issues during that season and he stated that he couldn’t leave after a night like that. However, contract talks stalled and it looked like he was about to sign with Chelsea once again. However, the next day, Gerrard signed a new deal with Liverpool.

The following season was arguably the best season of Gerrard’s career as he went on to score twenty-three goals in fifty-three appearances and in April, became the first Liverpool player since John Barnes, to win the PFA Player of the Year. He scored twice in the 2006 FA Cup Final against West Ham, including that famous thirty-five-yard screamer to draw Liverpool level, where they would go on and win on penalties. The goals made him the first ever player to score in the finals of the FA Cup, League Cup, UEFA Cup and Champions League. Liverpool ended up getting to the Champions League final and once again faced AC Milan, however, they couldn’t reproduce their heroics from last time out and lost the tie 2-1.

In December 2007. Gerrard was voted sixth, behind the likes of Messi, Ronaldinho, and Kaka for the 2007 FIFA World Player of the Year.

Liverpool would only go onto to win one trophy in this space of time, this was the 2011-12 League Cup, however, this space of time was when Gerrard accomplished so much on an individual basis. He went on to make his 250th league appearance as a captain, achieved many appearance records and won countless individual awards such as a place in the UEFA Euro Team of the Tournament, ESM Team of the Year, PFA Premier League Team of the Year. He also won PFA Fan’s Player of the Year, FA England Player of the Year and the FWA’s Footballer of the Year. He really cemented his place as a Liverpool, England, and football legend.

However, as he aged, things turned sour for Gerrard. He had that astonishing red card against Manchester United second after coming off the bench. Countless injuries kept him out of the squad and then, probably one of the biggest blunders in English football history, the famous Slippy G. Liverpool had pretty much got the league in the bag, all they needed to do was beat Chelsea at Anfield. It was 1-1 going into the closing moments and as the ball came to Gerrard, he slipped over and let Demba Ba run through and score to win the game for Chelsea. This ended up costing Liverpool the league title, something that eluded Gerrard over his star-studded career.

I couldn’t help but laugh at the bloke, it sounds bad and looking back at it Gerrard probably deserved that title for all the effort he had put into helping Liverpool get to that point. But something about it being him specifically that slipped over and cost Liverpool the league will always be funny to me. Though, sadly, that’s all that Gerrard will be remembered for in football society nowadays. Instead of saying ‘What a player Gerrard was’, it will be ‘Shut up Slippy G, you can’t say anything about choking the league’ and that’s just wrong, although funny on occasion.

Obviously, Gerrard wasn’t just a Liverpool legend, he was an England one too and, although he didn’t win anything in what was known as a ‘Golden Generation’ in English football, he still put in a damn good shift for England and actually captained them for a while. He went on to make one-hundred and fourteen appearances, scoring twenty-one times.

What He Meant To Me

Now, although I’m not a massive Gerrard fan and I’m not in love with him as much as others are, I still fully admire what he did as a player and young players should look at his loyalty as something they should take on themselves, as it is a dying quality in footballers now.

Everyone in my generation grew up and wanted to hit the ball like Stevie G, don’t lie we all did and that’s what made him a legend in my eyes. He hasn’t had a personal impact, as such on my footballing love and definitely not like Nedved and Dida but he will always stay in my memory for a funny reason.

One of my best mates was a Derby and Liverpool fan and I highly doubt he will read this, so I can say he supported two teams. Anyway, we were eight or nine at the time and he and his dad had a spare ticket for Liverpool’s game against Aston Villa, being a Blues fan I couldn’t give this opportunity up, to see Villa get smashed. So, we went to the game and my mates Dad had stood for about forty minutes for some popcorn for us. He finally got back to us and gave it to my mate. Now, to this day my mate and I don’t know what happened but my mate, for no reason whatsoever, dropped the popcorn all over the floor and the people in front of us. It was hilarious and will always stay with me through my life. Anyway, I got to watch Villa’s demolishing and I believe the score was 4-2 in the end and Gerrard got one, a thirty or forty-yard screamer that went in off the post.

Gerrard will hold a special place in my memory, not just for his footballing qualities but for the funny story of my mate dropping the popcorn.

That’s where I am going to end it today. Gerrard will go down as one of the greats and deservedly so. Next week I will be carrying on the mini-series with either Paul Scholes or Frank Lampard making the appearance. I will the finish the series off with the final player profile and I will answer the question that every fan asks on Twitter.