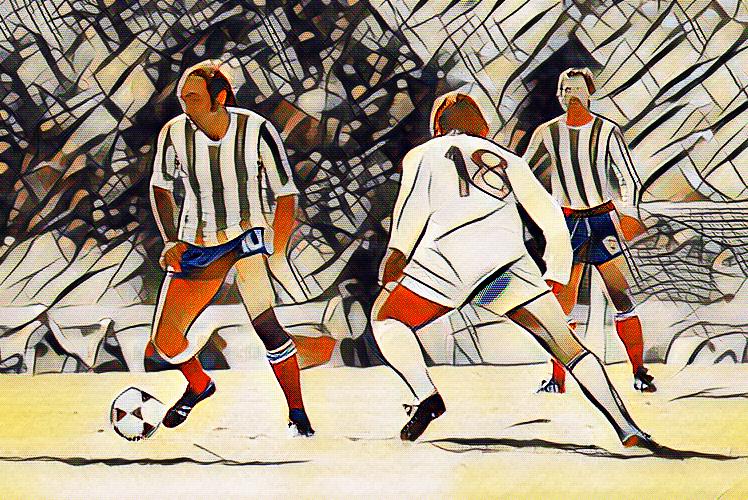 There was a time when football on television was in black and white. Obviously I’m far too young to remember that, but even though the UK had changed many years before, up until 1977 Argentina still had black and white television. We found this out when England embarked on a South America tour during that summer and one of the matches, against Argentina, was broadcast live. We watched in horror at all the litter on the pitch, not realising it was ticker-tape which captivated the world when we saw it in colour a year later, but in black and white it looked dreadful.

As many people still watched in monochrome teams had to be careful of colour clash with their kits, and one instance where it mattered a great deal came during the 1978 World Cup.

In Group One France and Hungary were due to meet each other in their final match of the First Phase. Both teams were out so there was nothing in the game, but there would be a potential clash of kits as both wore dark shirts and white shorts. In preparation for the tie FIFA wrote to both federations in February ordering the French to wear their away kit of white shirts and blue shorts. A few months later, for some reason, FIFA changed their minds and sent another communique ordering the French to wear their home kit of blue shirts and white shorts, with the Hungarians wearing their away kit of all-white. Unfortunately, the head of the French Football Federation barely acknowledged it let alone remember to do anything about it.

So come the day both teams arrived at the Estadio Jose Maria Minella in Mar del Plata only with white kits. Both teams warmed up on the pitch with the French in their blue tracksuit tops and Hungary with their red, until one of the French coaches noticed their opponents had white shirts on underneath. Now there was a problem. When French officials were asked where their white shirts were they explained they were back in Buenos Aires, about four hundred kilometres away!

This was a global tournament, with a worldwide audience watching on and yet the game couldn’t go ahead as too many people watching on television would see twenty players all in the same kit. So someone had the idea to go to the local football club, Atletico Kimberley, to see if they had a dark kit they could lend the French. They didn’t, but what they did have was their home kit of white shirts with green stripes. Surely the stripes would show up sufficiently on television, and with few other options the kit was brought back to the stadium.

But this wasn’t the end of the shenanigans. Kimberley, like Glasgow Celtic in those days, had no numbers on their shirts. Again these were days when you only saw squad numbers in major tournaments and so many of the French players played with shirts not only different to their usual colour but also with different numbers they’d worn for the two previous group games. Oh and there were only fourteen outfield shirts.

Kick-off was held up for three quarters of an hour as numbers were hurriedly ironed onto the shirts with the French missing the “irony” (sorry), of giving Didier Six the number six shirt. The French shorts had numbers so if you’re a bit of an anorak you’d be going nuts at players having a shirt with one number on it and shorts with something different.

It didn’t put the French off as they won 3-1 with all the goals coming in the first half. It was scant consolation for a side which began the tournament with a bang as Bernard Lacombe scored the fastest goal by a Frenchman in the World Cup, scoring after thirty seven seconds, earning himself a gold watch. But as can often happen, a goal that early can give the losing side an advantage as they now have almost ninety minutes against a team which is slightly more relaxed having just scored. So it transpired Paolo Rossi scored his first goal in a World Cup and Renato Zaccarelli grabbed the winner and Italy won 2-1. Both countries would have their day, though, with Italy winning the 1982 World Cup and France won the 1984 European Championships.