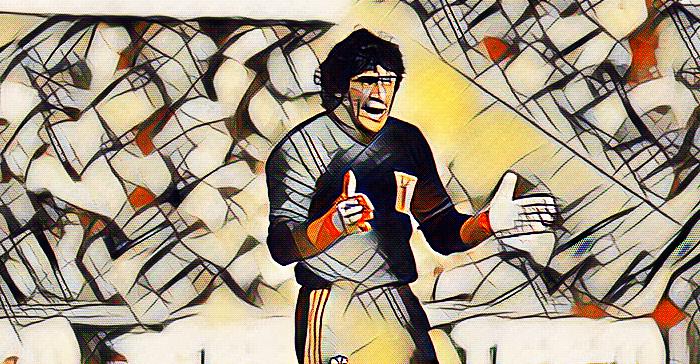 We’ve already had Clive Thomas and the incident of a disallowed goal. Now here’s number two

Many South American goalkeepers have earned the nickname ‘El Loco’, as in madman, but Peruvian goalie, Ramon Quiroga, certainly worked hard to make it his own. Born in Rosario, Argentina, he began his professional career at the local club before moving west to Peru and Sporting Cristal. He became a naturalised Peruvian and made his debut for the national side the year before the World Cup. Having taken part in the inaugural tournament in 1930, Peru didn’t qualify again until Mexico 1970. With the tournament again in their part of the world they took the opportunity of an available qualifying spot and made it to Argentina.

They began well this time with a wonderful demolition of Scotland, coming from behind to win 3-1. A goalless draw with the Dutch preceded a 4-1 win over Iran and they topped the group. The Second Phase was another group format with two group winners and two runners-up. Unfortunately for Peru neither Argentina or Brazil had won their groups, so they were lumped in with them, along with Poland. Their opening game in the Second Phase saw them beaten easily by Brazil in Mendoza.

Four days later they were back in Mendoza to take on Poland, who themselves had lost to Argentina in their opening game of the group. Szarmach had put the Poles in front midway through the second half and Peru continued to push forward. As the game reached the final five minutes Poland played the ball forward into the Peru half down the left wing, when suddenly Quiroga appeared from out of shot to tackle Deyna about ten yards inside his own half. He then calmly brought the ball forward before playing it down the right wing. In an era when keepers rarely ventured from their area, this brought delight from the crowd.

These days keepers are frequently employed as a “sweeper keeper” and often seen outside their area as their team attacks. But this was the seventies where many managers would’ve been angered at a keeper taking such risks. They were expected to stay within their penalty area and if their team spent the whole game camped in the other half they had to find some way of concentrating. Ray Clemence, for example, maintains learning how to concentrate was an important part of his game as Liverpool, especially at home, spent much of the game in their opponent’s half.

The video is well worth watching. Please remember few watching on television were expecting to see a keeper enter “stage right”, but more was to come as El Loco completed the best comedic side entrance since Basil Fawlty and the car, “I’m going to give you a damned good thrashing”.

For English viewers, commentator Gerry Harrison and his summariser, Ian St. John, had alerted the audience to the keeper’s antics but the television director had yet to pick up on it. Then with just a couple of minutes to go and Poland camped in their own half, Gorgon desperately cleared the ball from his own area to find Lato free on the right about 10 yards in his own half. Suddenly there was Quiroga in the opposition half to try and tackle the Polish striker. Lato knocked the ball round the keeper who then rugby-tackled him. To great howls of delight from St. John, English referee Pat Partridge had no option but to book Quiroga, who duly clasped his hands behind his back bowing in contrition. Argentinian born, Quiroga had certainly endeared himself to the crowd.

Peru didn’t find the goal they needed to earn a point and ultimately lost all three group matches. It had all started so well but gradually got worse. Quiroga had pulled off some fine saves during the tournament although it ended in controversy. We’ll leave that for another day. But for El Loco he had won a place in many people’s hearts for his antics.