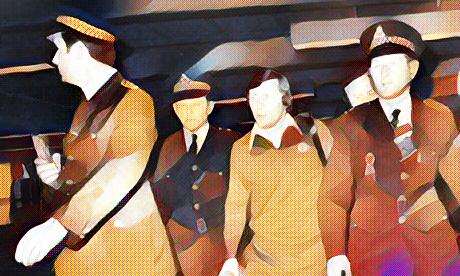 Scotland always felt they were unlucky in the 1974 Finals when they went out despite not losing a game. They held the World Champions, Brazil to a goalless draw and only went out on goal difference with the difference being just one goal.

Four years later they were again flying the flag for Britain as the only representative and in 1977 they appointed an ambitious and charismatic manager, Ally McLeod. McLeod had been manager of Ayr United and was known for his outrageous optimism, often in the face of unrelenting realism.

Almost as soon as he took the job he was talking them up as potential world beaters. Their qualifying campaign only required them to play two sides, with the shoot-out between them and Wales having to be played at Anfield due to crowd disturbances in a previous match. It was supposed to be a home match for the Welsh, but crowd trouble at Cardiff against Yugoslavia meant they had to play somewhere else and the Welsh FA plumped for Anfield and the extra revenue, rather than Wrexham. Controversy surrounded the closing stages as Joe Jordan handled in the area but the French referee awarded it to Scotland believing it had hit the hand of Welsh defender, David Jones. Don Masson converted the kick and Kenny Dalglish sealed victory soon after. To be fair to Scotland they had also beaten Czechoslovakia who were then defending European Champions.

Ignoring the reality of failing to win a game in the Home International Championships the month before they landed in Argentina, including losing to a Steve Coppell goal at home to England, McLeod organised a lap of honour for the squad. Trevor McDonald, reporting for ITN News, was there to ask him “What will you do if you win the World Cup”, to which McLeod replied without missing a beat “Retain it”.

He seemed adamant Scotland were “the greatest football team”, and even Andy Stewart released a pre-tournament record confirming this, with the iconic line “we’ll really shake them up when we win the World Cup”. Calling on the services of Kenny Dalglish, Graeme Souness, Asa Hartford, Archie Gemmill, Don Masson, Joe Jordan, it was arguably the best side Scotland had ever assembled and certainly if you were going to name an English First Division XI most of these players would be in it. McLeod even highlighted the date of the Final when you’d see Scotland clutching the trophy.

Things began badly, with the bus breaking down from the airport to their hotel and then followed a similar pattern of comedic theatre. McLeod had convinced the public of their ability and when Joe Jordan put Scotland in front against the minnow from Peru. It seemed as if the whole three weeks would be a procession to victory. But McLeod was not a man for detail. He hadn’t bothered researching his opponents, stating pre-match that his left-back would deal with one of the Peruvian threats, Juan Carlos Oblitas. The only flaw in his plan was Oblitas played as a left-winger.

The man they should’ve been targeting was Teofilo Cubillas. The talisman laid on the first for Cueto, scored the second and then put the icing on the cake with a gorgeous free-kick to win the game for the South Americans. McLeod’s biggest mistake was probably not selecting Souness and it wasn’t until the final game when he realised his mistake, selected the Liverpool midfielder, and watched him run the game against the Dutch to give Scotland one of their best World Cup performances in living memory. To add insult to injury the man he selected instead, QPR’s Don Masson, missed a penalty against Peru when they were a goal up.

If this wasn’t enough, what transpired in the dressing room shocked the world even further.

We didn’t hear the full story until the next day but Scotland’s left winger, Willie Johnston had failed a drugs test. Johnston, a tricky winger in the Jimmy ‘Jinkin’ Johnstone mould was playing his football at West Brom, having joined them in 1972 from Rangers. This was the famous side managed by Ron Atkinson containing Cyrille Regis, Laurie Cunningham, Bryan Robson and Brendan Batson. Johnston was a hot-head with twenty red cards to his name, moving to England whilst banned for two months for punching Partick Thistle’s Alex Forsyth, whom he taunted by calling him Brucie.

Scotland, like England, embarked on a South American tour twelve months before the tournament but in a match against Argentina, Johnston received his marching orders. He’d taunted their full-back, Pernia, who responded with spit and a punch in the kidneys. The ensuing fisticuffs resulted in both players seeing red. Johnston was therefore a marked man with the locals when he touched down in Buenos Aires, having been warned by striker, Leopoldo Luque, “never to set foot in the country again”.

Johnston suffered from hay fever. His doctor prescribed Reactivan and he took two pills before the opening game, thinking nothing of the consequences. Remember these were days before Ben Johnson, Diego Maradona, Mark Bosnich and Kolo Toure and so drugs in sport, especially football, were a rare occurrence. FIFA had some fairly primitive testing procedures which mainly consisted of testing urine from ‘volunteers’ after a match. Johnston volunteered as Gemmill, the original choice, declined and when they were back at the hotel he was suddenly confronted by the aforementioned Trevor McDonald and a camera crew. The medicine he had taken contained two banned substances. Johnston in his defence still claims he didn’t give it a thought this could be the case and if you watch the game again his performance certainly wasn’t enhanced in any shape or form.

It has subsequently emerged Argentina wanted him thrown in jail for the misdemeanour, which is pretty ironic when you consider the human rights abuses occurring on an almost daily basis under the brutal military regime in the country at the time. The SFA, sensing a diplomatic incident, carted the player off onto a plane out of the country as soon as they could. For Johnston this involved a twenty-nine hour journey over three days and the awkward questions of an ITN News team on the plane. Once he landed at Heathrow, Ron Atkinson met him and told the winger he needed to go to the BBC to do an interview. Atkinson claimed he had a pal at the corporation who was about to lose his job and so the player could do them all a favour and appear on ‘Nationwide’ the equivalent of ‘The One Show’ today.

Still tired, jet lagged and thoroughly confused and scared over the whole process, Johnston was then seen in a television studio sat next to Frank Bough answering questions about his drug taking. We even had the humorous sight of Bough holding out the little yellow pills in his hand which were now melting under the studio lights.

It was an ignominious end for both the player and the team. Johnston never played for his country again, moving to Vancouver Whitecaps shortly after having endured calls from fans accusing him of being a junkie. Scotland battled back from defeat against Peru to earn a point against the lowest ranked side in the competition, Iran. Then came the “wee Archie” inspired game against Netherlands when they were brilliant, but it was all too little too late and flew back home with their tails between their legs.

The whole episode was embarrassing for the country, Johnston and especially McLeod, who to this day is bemused by his subsequent sacking. Why they didn’t cast him in the role of the Black Knight in Monty Python’s “The Holy Grail” remains a mystery to the rest of us.