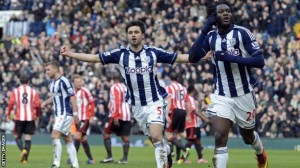 Pete Sixsmith reports on another awayday disappointment,  in fact not one but – for him – two in one weekend. Can’t speak for fans of the Leeds Rhinos but it is familiar reading for Sunderland supporters …

I should have known that it wasn’t going to be my weekend when a huge Melbourne Storm forward called Jesse Bromwich careered over the  Leeds Rhinos’ line to put his team ahead in the World Club Challenge at  Headingley on Friday night.

Eighteen hours later at West Bromwich, a similarly sized and equally  effective Belgian centre forward took advantage of a misjudgement by  Titus (“Look out there’s an error coming”) Bramble and put the Baggies  two goals up against us and subsequently won the game for them.

A disappointing weekend for those who support the Rhinos and The  Black Cats, but the Rhinos game counted for very little in the whole  scheme of things, unlike the Hawthorns encounter which could play a  seminal part in our season.

To be fair, we did not play badly and both Baggies goals were  avoidable. The referee got the Gardner penalty spot on; if the ball hits the outstretched hand it’s a penalty. Unfortunately, Mr East failed to  spot Gareth McAuley’s handball a few minutes later, to the chagrin of  Adam Johnson.

East is a referee in transition as he is not yet on the full time  list. This was his fifth Premier League game and he has been given  middle ranking games (Fulham, Villa, Liverpool, that kind of thing),  including two against us – he made his debut at Swansea in September.

He had a decent game except for the fact that on at least two  occasions he got in the way and spoiled promising moves which could well have brought us something.

But enough of Wiltshire Roger. What of the performance of those gallant lads, freshly returned from the winter hell that is Dubai?

It wasn’t bad, it wasn’t good, it was, well, average. And that is about as good as it gets for us this season. Average.

There was nothing to get excited about and not much to get too depressed about – although if we continue losing games by the odd goal, we will end up down amongst the QPRs and Readings of this world.

The manager decided to go with the clamour for two forwards and four in midfield. Did it work? Probably not, as neither forward scored and Graham did little to worry the impressive Ben Foster. Fletcher (roundly booed by the Baggies fans because of his Wolves connections; how childish. Catch us jeering former Mags when they turn up at the SoL.) hit the post and tried to get the forward line moving, but the lack of spark in midfield made that very difficult.

That is where the nub of our problems lies. Comparing the respective midfields is like comparing English Rugby League with its Antipodeans equivalent. One gives plenty of effort and has the occasional spark, while the other is a well oiled machine that just keeps on rolling.

Sess had a good game out wide and Adam Johnson had his moments. Both Larsson and N’Diaye worked hard, but neither had the ability to pick a telling pass or set up the front men.

Albion were able to do this, with the very impressive Youssouf Mulumba showing how it should be done. He is a very good player and Albion will do well to keep hold of him should bigger clubs come calling – although I doubt he will take off to QPR.

Where do we find a player who will control the centre of midfield? Vaughan was ok when he came on and he showed his composure when he brought down the ball and hit a shot that was deflected narrowly wide.

Composure is something that we sadly lack. N’Diaye exhibited precious little when he put a cross into the crowd from a very inviting position and James McClean really should have put away the ball that landed at his feet as Mr East prepared to blow his whistle for the end of the game. Instead, he shanked it over the bar when a sidefoot or header would have given us a point.

The other thing that struck me was that had we been 2-1 ahead at the SoL with ten minutes left, the opposition would have battered away at us and we would have retreated deeper. It didn’t happen here.

We did attack but with out a great deal of intensity and McAuley and Olsson were discomfited but not troubled. We should have been hoying the kitchen sink, gas cooker and American style fridge with water cooler, ice maker and drinks dispenser at them, but we didn’t.

In February, we have taken zero points from nine, allowing every team around us to play catch up and one or two to get ahead of us. By Monday night, if either the Mags or Southampton win and West Ham take all 3 points from Spurs, we will be looking over our shoulders.

A similar return from the next three games and we will be well and truly in the proverbial brown stuff. Are we good enough to get away from it and leave QPR, Reading, Villa, Wigan and Newcastle (wishful thinking there) cutting each others throats? We shall see.

Finally, many thanks to West Midlands Police for routing the returning coaches through parts of Birmingham that even Brummies know little of. They made us wait until almost 6pm and then, instead of a left turn past the ground and on to the M5, it was a right turn and the delights of Brown’s Green and Hamstead. I suggest we get our own back next season by sending the Baggies to Jarrow and through the tunnel before joining the A1 somewhere near Morpeth – assuming we are in the same division!