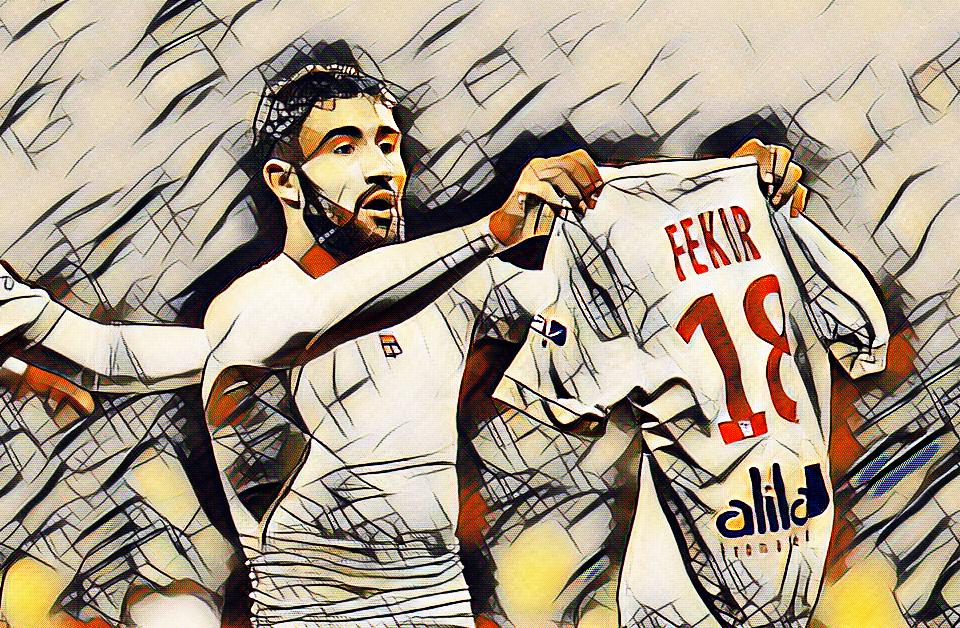 In recent years Lyon have always had enigmatic talents coming through their youth ranks to help them towards success. They are even nicknamed Les Gones which directly translates to The Kids. When the French club reached the Champions League semi final under Claude Puel in the 2009-10 season they had Sidney Govou as a prominent figure on the right wing. Prior to that Karim Benzema had won four Ligue 1 titles and one Coupe de France in just five years in Lyon’s first team before departing to Real Madrid having been promoted from the B team.

The latest talent to be nurtured at Lyon before being sold for big money was Alexandre Lacazette. The striker had spent eight seasons in the first team, scoring 129 goals in 275 games before completing a £47.7 million transfer to Arsenal. When he made the move somebody had to step into the role of being Lyon’s established homegrown star.

Despite not playing in the same position as Lacazette, the man who took on the mantle was Nabil Fekir, who is Les Gones’ club captain. There are other talents in the squad such as Houssem Aouar, but Fekir’s abundance of technical ability and consistent performances have made him the big name at Lyon’s Groupama Stadium.

He really is the type of player to get supporters on the edge of their seat. Type Nabil Fekir into YouTube and the first thing you’ll come across is a compilation showing Lyon’s number 18 producing deft finishes, inch perfect through balls, mazy runs and enough nutmegs to get your skill obsessed younger brother frothing at the mouth, all this is topped off with the Frenchman lobbing an unsuspecting keeper from his own half.

The latest strike that will go on his impressive showreel came recently against Paris Saint-Germain. Having won a free kick in a position that seemed unfavourable for a shot, Fekir outfoxed PSG stopper Alphonse Areola to send the ball soaring in off the post, opening the scoring in just the second minute as Lyon went on to win 2-1.

It is not just the quality of Fekir’s contributions but their regularity which is so impressive. His aforementioned goal is one of 16 Ligue 1 strikes in 20 games this season and is part of a six game run in which he has contributed to a goal in the league. He hasn’t been on the score sheet as often in the Europa League as he has domestically -scoring twice in six games- but he showed his importance as he scored the opener from the penalty spot in a fiery 2-1 win against Everton despite Jordan Pickford going the right way.

Fekir joined the club he’s been at for seven years in a move from AS Saint-Priest in 2011 when he was 17, joining Lyon’s B team. It took the Frenchman two years to get his first chance for the first team under Remi Garde as he played the entirety of a 2-1 loss at the hands of Evian on his debut.

The Frenchman got on the score sheet for the first time in a game where he showed Lyon supporters a sign of what to expect from their attacking midfielder. After Bafetimbi Gomis had opened the scoring Fekir coolly dispatched the ball past Mickael Landreau to make it 2-0. He then went on to assist Bakary Kone and Lacazette as Lyon secured a 4-1 victory.

In total Fekir has now racked up 53 goals and 34 assists in 140 matches for Lyon, as well as representing France 10 times and scoring in a friendly loss against Belgium. He was linked with a move to Liverpool in the January transfer window but has remained with Lyon who will face Villarreal in the Europa League Round of 32.

This is one of the most highly anticipated ties in the competition and is one that is very close on paper despite El Submarino Amarillo having sold Cedric Bakambu to Chinese Super League club Beijing Sinobo Guoan. In these matches there will often be one moment of magic which makes the difference and Lyon will be looking to their star man Nabil Fekir to get them through. A classy strike to help Lyon progress would go perfectly in the many compilation videos that will undoubtedly be made about him.