Ottavio Bianchi and Alberto Bigon have done it. In fact, they are the only two who have done it. During Napoli’s finest era, when players like Maradona, Ciro Ferrara, Alemao, Zola, and Careca donned the sky-blue jersey, Bianchi and Bigon managed their respective Partenopei teams to Scudetto titles. Bianchi had the honour of overseeing Napoli’s first ever league championship success in 1986/87. In four impressive seasons, he had never let his team finish below third-place. Bigon replaced Bianchi for the 1989/90 season and won it at the first attempt. Of course, if you ask any Napoli fan from that era who was really responsible for both Serie ‘A’ successes the answer would be Diego Maradona, and probably rightly so.

28 years later, Maurizio Sarri and his current crop of Napoli players are allowing the people of Naples to dream again. The main obstacle, however, is Juventus. I Bianconeri have won the last six Scudetto titles in a row. AC Milan were the last ‘other club’ to win the trophy. That was in 2011, with Massimiliano Allegri’s squad boasting the talents of Nesta, Seedorf, Gattuso, Ibrahimovic, Robinho, Thiago Silva, and Alexandre Pato.

Allegri is now in charge at Juventus and has been since 2014. Maurizio Sarri knows the magnitude of the task before him. In a strange case of sporting scripture, Sarri can only be prevented from equalling Allegri’s Milan achievements by Allegri himself.

Rise of the blue machine

Sarri has been in charge at Napoli since 2015 when he was hired in place of the then Internazionale-bound Walter Mazzarri. The former banker arrived from Empoli where he had brought the small Tuscan club up from Serie ‘B’ in his second season and achieved a respectable 15th-place finish in his third and final term.

In his first season, Napoli powered to a brilliant 82 points total and finished in second position. The previous season, they had just finished on 63 points, in fifth place. But that wasn’t just a glitch in the matrix, Sarri and Napoli improved again last season, finishing with 86 points. Unfortunately, it was only good enough for third place, as  Roma finished second with Juventus winning the title with 91 points, the same total they had achieved the previous season.

Yet, Napoli fans must have felt huge optimism as they approached the start of this season. Sarri’s year-on-year improvement to their points tally can surely only lead to one eventual outcome?

In 2015, Sarri inherited a strong but underperforming squad from Walter Mazzarri. He set about improving his lot immediately. In came Pepe Reina from Bayern Munich, Allan from Udinese and Chiriches from Spurs. Sarri also brought the Albanian right-back, Elseid Hysaj, with him from Empoli. The most notable departees were Gokhan Inler, who left for Leicester City, and Eduardo Vargas, who was on his way to Hoffenheim in the Bundesliga.

Napoli’s squad already had the likes of Hamsik, Higuain, Insigne, Jorginho, Koulibaly, Ghoulam, Albiol, Mertens, Callejon, and Maggio. Sarri knew he had a very solid base to work with. Indeed, Gonzalo Higuain went on to score a Serie ‘A’ record of 36 league goals in that 2015/16 season.

Higuain was whisked away to Juventus for €90 million in the summer of 2016. Sarri brought in two Polish internationals – the striker, Milik, from Ajax, and midfielder, Zielinski, from Udinese. Leonardo Pavoletti was another attacker Sarri recruited, this time from Genoa. Napoli finished with 86 points in 2016/17, 4 points higher than their previous total, but in third place, this time behind both Juventus and Roma.

Pavoletti only lasted a season and was offloaded to Cagliari last summer, as was Ivan Strinic who moved to Sampdoria. Adam Ounas was the only signing of note, arriving from Ligue 1’s Bordeaux. However, opportunities have been limited so far for the young Algerian international.

For Sarri and Napoli, it appears the team is gelling so well after years together. This, coupled with Sarri’s successful 2015 recruitment coming to fruition (Reina and Allan are some of the first names on the team sheet every week), has led to the possibility of success come May this year.

Since Sarri took over in 2015, Napoli have performed very impressively in Serie ‘A’. Below is a table showing Napoli and Juventus’ details up to the same stage (21 games) over the last two seasons along with this season’s current record. 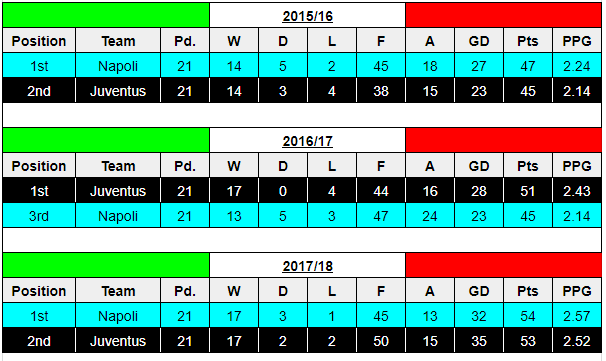 It is a testament to just how well Napoli have been playing that Juventus have amassed more points than at the same stage in 2015/16 and 2016/17, yet, Napoli are still a point ahead. In fact, the last time Juventus were doing better at this stage was in the 2013/14 season when they had 56 points after 21 games. Napoli’s points per game (PPG) at this stage was 2.24 and 2.14 in the previous two seasons. This season, they have achieved a simply brilliant 2.57 PPG. Juventus’ goal difference is better than in either of the last two seasons, but Napoli have improved greatly, due to almost halving the number of goals they had conceded at the same time last year. 13 goals conceded in 21 games is a fantastic record for a team known for playing an offensive style of football. They seem to have managed that solidity at the back without sacrificing anything going forward, at least as far as the records show. They have scored 45 goals, the same amount they managed in 2015/16 and just two goals less than the same stage last year when they had conceded 11 more.

A closer look at the stats

A quick look at the below table shows that Napoli’s form fell off a little as they played the last 17 game of 2015/16. But the good news for I Bianconeri is that the last 17 games of last season they improved dramatically. They went from 2.1 PPG from the first 21 games to attaining 2.47 PPG in the remaining 17. Of course, this season there’s not much improving that Napoli can actually do. They have been simply outstanding, already on 2.57 PPG. But that strong finish last term shows that they do have the capability of matching or almost matching the form they have displayed up to now as they enter the business end of the Serie ‘A’ schedule. Also, the dramatic defensive improvement is clear to see here. A new high rate of clean sheets being kept in 52% of their league games reflects brilliantly on the work being down by Reina, Albiol, Koulibaly, and the others. This is a very settled defensive unit and it may well be that the lack of transfer activity at the club last summer has worked in their favour.

Sarri may be a little concerned that Napoli’s “Failed to Score” rate has risen to 19%. That rate accounts for four games. Their three draws were all 0-0s and their only defeat was 0-1, at home to Juventus.

Juventus have won the title with a total of 91 points for the last two seasons. For Napoli to reach that total, they need 37 points from their remaining 17 games. That is an average of 2.18 PPG, surely an achievable rate for how this Napoli team is playing. However, Juventus have also been better so far this season. That is another stumbling block for Napoli. 91 points may not be enough to take the title from Juventus.

Juventus had an astonishing 2.71 PPG rate in their final 17 games of 2015/16. Last season, their form dropped a little for that final stretch, going from 2.43 PPG in the first 21 games to 2.35 PPG from games 22 to 38. Juventus have always been built on a sound defensive setup as can be seen from their previous “Clean Sheets” rates of 58% and 47%. They are back up to a 57% rate so far in 2017/18. They may have lost Bonucci to Milan but they don’t seem to have suffered at the back. Benatia and Rugani have both helped to fill the gap in Bonucci’s place. With Dybala and Higuain up front, Juventus very rarely fail to score, as can be seen from rates of 11% in 2015/16 to just 3% last season, and 5% so far this term.

A stand out factor this season is Napoli’s away form. Last season, they had the best away record in Serie ‘A’. They have continued this season, with 10 wins and 1 draw from 11 away games. They won an excellent 43 points on the road in 2016/17, and they have already won 31 points away this season. Napoli have won 2.82 PPG on their travels in 2017/18. They have 9 home games remaining and 8 away.

Juventus have been far more consistent across the board, winning 2.55 PPG at home and 2.5 PPG away. Juventus have 8 home games and 9 away still to play.

As the Serie ‘A’ season enters its final few months, sh*t certainly will get real. The below table shows how both teams have fared during the same period (games 22 – 38) in the last two seasons.

Juventus blew Napoli away with their stunning 2.71 PPG in the run-in for the 2015/16 season. However, last season, Napoli were slightly the better of the two with 2.47 PPG compared to Juventus’ 2.35 PPG. 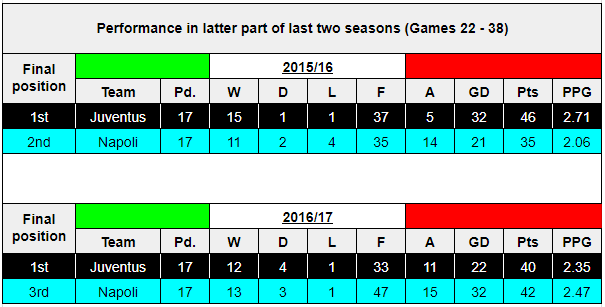 Based purely on the stats from both teams’ performances this season, the tables below show that Napoli would go on to win the league title by a one-point margin. But when looking at their remaining games – the average position of Napoli’s remaining opponents (as they currently stand) is 10.7 while Juventus’ opponents average placing is 11.3. This tells us, theoretically at least, that Napoli’s games should be that little bit more difficult than those of Juventus. 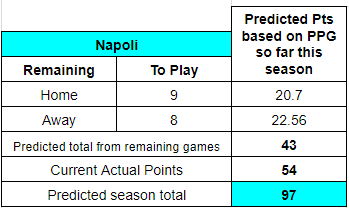 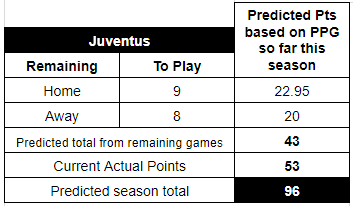 Juventus have won the Italian double for the last three seasons in a row, winning the Coppa Italia along with the Scudetto. They have also reached the Champions League final in two of those three seasons, only to finish as runner-up on both occasions, once to Barcelona and once to Real Madrid. They will face Spurs in February in the last sixteen of the Champions League while they have a Coppa Italia semi-final coming up, as well. As always, the challenge will remain for Juventus to keep fighting on all fronts as they aim for a fantastic treble.

Napoli are out of this season’s Coppa Italia, losing their quarter-final clash with Atalanta, who face Juventus next in the semis. Napoli’s recent European endeavours have fallen short, exiting the Europa League at the Round of 32 in 2015/16 and getting knocked out of the Champions League last season in the last sixteen. Sarri’s men finished third in their Champions League group last month, meaning they are now demoted into the Europa League where they will face fellow Champions League departees, RB Leipzig, in the Round of 32. One can only presume that with a coveted Serie ‘A’ title within their reach, Napoli won’t focus a huge amount of attention on Europe’s less-than-elite club competition.

For some perspective, Napoli last won Serie ‘A’ in the same month that Liverpool last won the English league championship – May 1990. It’s been 28 years of waiting, with just the odd Coppa Italia success in the meantime.

In the season when Maradona’s Napoli goalscoring record was overtaken by Marek Hamsik, is the Argentinian idol of Naples about to pass another mantle to the current team. The mantle of being Champions of Italy.

All eyes will be on Napoli between now and May. Sarri and co will just be hoping Juventus’ gaze shifts focus, possibly to the Champions League, at some stage. Then, and possibly only then, can they strike the killer blow and snatch the Scudetto from the Turin giants.