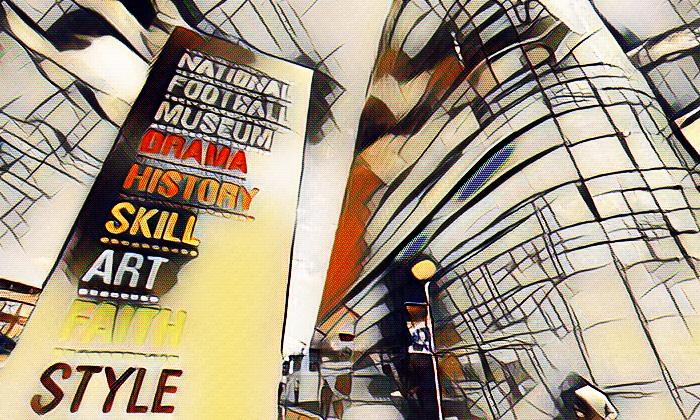 One week ago, on a bright and chilly morning in Manchester, I found myself walking through the city centre. I didn’t know where to go or what to see, my usual overloading of Trip Advisor and Lonely Planet having evaded me on this trip. I had no time to do a stadium tour of Old Trafford or the Etihad, I had very little money to hand. What was I do to? As I wandered through the city centre, trying to decide how best to amuse myself, I found myself standing in front of a beautiful tall glass building. It rose high above the crowds of people bustling about, leading their own busy lives. It stood tall, towering over the trams and buses coasting through their regular route. This building had many words in bright colours running down the centre. DRAMA. HISTORY. SKILL. ART. FAITH. STYLE. PASSION. But the three words on top of this grabbed my attention more than any other. NATIONAL FOOTBALL MUSEUM. I may not have known what I was looking for that morning, but I knew that I had found it. And the best part? It was free!

I say “free”. It was free to an extent. The ground floor had several Perspex boxes asking for donations, with suggested
donation per person signs. An hour and a half later, I walked out of the museum as happy as a kid at Christmas. I paid a £5 donation and quite frankly would have been happy to pay that price tenfold, such was the quality of the place. But what made it so special?

The vibe. The vibe made it special. This wasn’t like any museum I had ever been in before. You walk in and there is just this buzz about the place, excitement. There are the screams of kids laughing and having fun, that is to be expected. But what truly captivated me was the reaction of the adults. This wasn’t just a homage to Wayne Rooney and Eden Hazard, this spanned every generation, from the invention of the Football Association in 1963 to the present day.

I ended up being part of this buzz after only a couple of minutes. As you walk up to the museum’s entrance, there are stars on the ground, akin to the Hollywood Walk of Fame. Instead of Elvis Presley, Neil Armstrong or Mickey Mouse, this walk has the names and faces of the gods of the football game: Ronaldo, Zinedine Zidane, Sir Bobby Charlton. Back to the inside of the museum and I walked up to a board which had the names of the 2017 Walk of Fame inductees. “Wow” I exclaimed, “Paolo Maldini made the walk, that’s awesome!” I didn’t say this to anyone in particular, in fact I wasn’t even aware I was saying it, until some old man with a thick Brummy accent standing near me started nodding, then said “about bloody time mate, one of the best.” Then commenced a solid ten minute conversation about the Milan legend, debating his greatest on the all time scale, feeling sorrow at him not getting to lift the World Cup, what he must make of the shambles his team has become. Football truly is the sport which unites strangers like no other.

After this Maldini love-fest, I turned to my right to see a sight that many a football fan would have loved to have seen. A fully grown man blasting a football at the face of Robbie Savage. Alas, it wasn’t the real Robbie Savage. It was a cardboard cut out, Savage in a Wales strip with a giant head (which may or may not have been made to real life scale), with a mouth characteristically wide! People of all ages were stepping up to take a pot shot at the former Wales midfielder’s head. Rather than a hate crime against Robbie, it actually acted as a bit of target practice for the kids to improve their skills (well, supposedly the kids, I saw a number of adults lining up a few pile drivers at the BT Sport pundit…)

The skills training didn’t stop with Savage. Adjacent to a boards depicting information about the history of the FA and the Hall of Fame players were a couple of goal posts, a very enthusiastic coach and a dozen or so children running and screaming and having fun, every single child with a football. There were stepover drills, dribbling practices and a some intricate passing games. In an age where babies appear to be born out of the womb grasping an iPhone it was a nice moment to see all these kids running about enjoying the game of football in its simplest form.

I squeezed past a crowd of excitable tourists all clamouring to get their photo taken with the FA and League Cup, and began to ascend the stairs to the main event. This level had everything that a football fan could ask for. Nostalgia was dripping from the wall, from the FA Cup, to Match of the Day to the World Cup. I was in my element. Time constraints meant that I only had an hour or so in this building, therefore I begrudgingly had to speed through aspects of this. If I had the time I could have spent every moment of my day in here, reading every sign, listening to every word, gazing over each bit of memorabilia from years gone by.

One of the most evocative displays throughout the whole museum was the memorial to the Munich Air disaster. It would have been a powerful tribute anywhere in the world, but to be located in the National Football Museum, just a couple of miles from Old Trafford itself made the display that little bit more poignant. Similarly thought provoking were the tributes to the Hillsborough disaster and the Bradford stadium fire.

This level of the museum was rich with historical artefacts from so many different aspects of the beautiful game. There were woollen football jerseys over a century old, there were clips of iconic football commentary to listen to through headphones. “They think it’s all over. It is now!” There was references to football in popular culture, trivia about Match of the Day, a puppet of Eric Cantona from Spitting Image. It was interesting to see not only how football had evolved over the years, but also how the coverage of it had too.

As any regular reader of my work will know, I am a World Cup fanatic, perhaps demonstrated by the World Cup Calendar which I wrote last summer. As such, the section dedicated to the World Cup within the museum was akin to Charlie Bucket stepping into Willy Wonka’s Chocolate Factory. There were vintage jerseys, tournament posters, a replica of the Jules Rimet trophy. It was fascinating to see, to be immersed by memorabilia and history of the tournament that I hold so close to my heart.

I walked away from this section of the museum and ended up passing a larger than life sized statue of Michael Jackson. This was weird, I thought to myself. This was a football museum, and the king of pop, as talented as he was, had no place being here. Then I read the plaque. Of course! How foolish of me! This was the stature that was bizarrely erected in honour of Jackson’s death and was unveiled before a game against Blackpool in 2011, to much mockery from football fans throughout the country. When Fulham got a takeover in 2013 it was announced that the statue would be removed from Craven Cottage, and in 2014 it was given a home at the National Football Museum, where it is appreciated more than it is mocked.

The next floor up appeared to be something of a games museum, put it in your pounds to get tokens and then from there play a multitude of cool games. I must confess that I skipped this part. I was running out of time and I had my mind fixed firmly on the contents of the final level. An entire level dedicated to arguably the greatest player to have graced the game of football.

Pelé. Wall to wall Pelé. The floor was a shine to the former Santos and New York Cosmos man, who won three World Cup’s with Brazil. The room was covered with photographs and paintings about the striker, along with quotes from others about him. In an exhibit that featured many stunning pieces of art involving Pelé, it was a quote by the late Andy Warhol that stood out to me. ” Pelé was one of the few who contradicted my theory: instead of 15 minutes of fame, he will have 15 centuries.” Other notable quotations written on the wall were “Pelé was the only footballer who surpassed the boundaries of logic“, according to Johan Cruyff, while Sir Bobby Charlton once said “I sometimes feel as though football was invented for this magical player.” There was a section in the middle of the exhibit which featured some of his football strips, along with a multitude of fascinating facts and stats about the man. At the far end was a small cinema screen that showed some form of documentary about the player, though regrettably I did not have the time to take this in. In a World where people seem more intent on refreshing their Instagram feed at a football game than actually watching the action in front of them, it was a pleasure to see people of all ages taking in this up-scale exhibition of a true footballing god.

Content that I had stared at everything possible within the Pelé exhibit, I ambled back downstairs, casting one more eye over everything I could see before leaving. I walked straight past the gift shop and cafe, having neither the time nor the money to utilise either option properly, and then out of the building, allowing myself the opportunity to once more glance at the football Walk of Fame outside the museum. My time here was over, sadly, though I could easily have spent every waking hour in here without getting bored. It was such a marvellously well put together assortment of football memorabilia, past and present, and was a true pleasure to be a part of. It had something for everybody, old and young, casual observer or diehard fan. It was informative and it was fun. It got kids to put their phones down and read, learn and communicate, it evoked complete strangers to strike up conversations. It took you on a journey throughout the history of the FA from its very beginning over a century ago up to the modern it. It looked at the World Cup, the FA Cup, the Premier League and everything in between. It dedicated an entire floor to Pelé, and gave a firm nod to the greats of years gone by. It gave the visitor everything they could ever want, yet still left them wanting to return. And it all started with kicking a football at the face of Robbie Savage. Truly a day well spent.