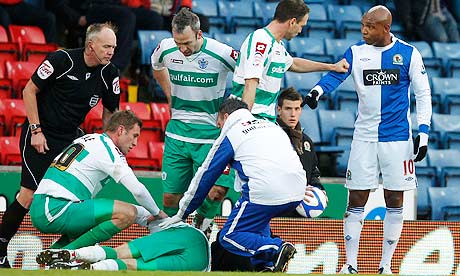 Let’s set the scene. It’s January 2011 and Neil Warnock is manager of QPR and has just seen his team knocked out of the FA Cup in the third round by Blackburn thanks to a goal scored ten minutes from full time by David Hoilett. To make matters worse for Warnock, one of his players, Jamie Mackie, suffered a double fracture of his leg after a collision with Gael Givet after just half an hour.

Mackie, who had played in every QPR game up until that point, was stretchered off the field, but not before Blackburn’s El Hadji Diouf dished out some abuse. “Fuck you and fuck your leg,” is what he reportedly said.

“He’s broken both bones, his tibia and his fibula, and he’s gone to hospital but will travel home with us,” Warnock said after the game. “The lads were furious with El-Hadji Diouf; he (Mackie) had broken his leg and he is calling him all sorts on the pitch. There was no need to put the finger up and call him a disgrace and even the Blackburn people were embarrassed. I can’t abide people like that, I don’t know why he wants to take on the world every week. For many years I have thought he (Diouf) was the gutter type – I was going to call him a sewer rat but that might be insulting to sewer rats. I think he is the lowest of the low and I can’t see him being at Blackburn much longer because I can’t see Steve Kean putting up with someone like that in the dressing room when he is trying to form a new image for Blackburn. I think he will be the first to go and good riddance – I hope he goes abroad because I won’t miss watching him. He is a nasty little person.”

Mackie’s team mates took to Twitter to voice their opinion of the Senegal frontman, with QPR defender Bradley Orr saying: “Never come across a more repulsive human being than E-H Diouf! The things he was saying were disgusting! The lad has just broken his leg! You horrible disgusting man E-H Diouf! Your time will come!”

Then QPR goalkeeper Paddy Kenny, who now plays for Leeds, was equally as disgusted, tweeting: “So gutted for the boy Mackie, football can be horrible sometimes, and that cunt Diouf will get it one day, what goes around comes around.”

Diouf responded to the criticism, pleading his innocence, and claiming the argument he had with some Blackburn players after the final whistle had nothing to do with Mackie’s injury.

“I am very sorry for the lad to have broken his leg, the QPR player,” he said. “But what Warnock said – I never said that. After the game I argued with some players, that’s it. When the lad broke his leg, I never said anything back to him. I never talked to him, you can ask Benjani or Ryan Nelsen. Everything Warnock said is not right. I am not disappointed with what Warnock said – who is Warnock? He is nothing to me. He is not Alex Ferguson, he is not Arsène Wenger, he is not Sam Allardyce or an important manager. Neil Warnock does not like me and I do not like Neil Warnock.”

Eighteen months later, having been sacked by QPR and employed by Leeds United, Warnock has signed Diouf for his Championship side. Diouf has signed on non-contract terms after leaving Doncaster following their relegation last season. The 31-year-old Senegalese international trained with the club this week and his signing was confirmed ahead of today’s Capital One Cup clash with Shrewsbury Town, with Diouf being named on the bench. He made his début when replacing goalscorer Ross McCormack with 15 minutes to play in their 4-0 victory.

Next season will be interesting at Elland Road…

VIDEO: Leeds United fan who claims “I am not a hooligan” assaults Sheffield Wednesday keeper