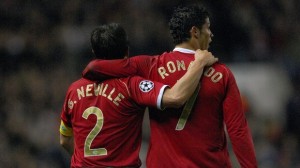 Gary Neville, who captained Manchester United during Cristiano Ronaldo’s time at the club, has spoken in an interview with bwin about how his former club can hope to stop the Portuguese star tonight.

“The only way you can stop Cristiano Ronaldo is to get players around him, more than one,” said Neville. “Someone’s got to get to him quickly. When the first challenge goes in, you’ve got to make sure the second challenge, third challenge is there behind. One on one, with him running at that pace at you in to the box, you really are in the lap of the gods. He’s the type of player that requires more than one player around him. If he drifts to the left, goes to the right, whoever is up against him, they have to make sure that somebody else is covering from behind as well, and try and deny him space.”