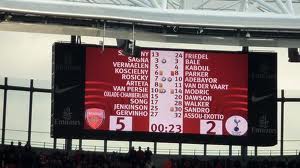 Sunday afternoon at the Emirates Stadium will see the biggest clash between Reds and Whites since the Russian Civil War. Arsenal will take on Spurs in the North London Derby, in an early season instalment of what has been in terms of on-pitch action the best derby in the Premiership the last five years or so.

A decade or so ago, Arsenal fans, tired of battering Spurs with ease and contesting for trophies at home and abroad while Tottenham struggled to finish in the top half, may have said Man United had become their true rivals. Well, such talk has floundered in recent years. Spurs have got better while Arsenal have got worse and veer closer to self- parody by the season with their posh stadium, monstrously high ticket prices, fans liable to turn on their team in the blink of an eye and laughable inability to make the sort of signings that will help them progress.

If Spurs are to finish fourth, a good result on Sunday would be a big boost. If they are to achieve this, they will need to overcome severe mental scarring. The last two matches at the Emirates in this fixture have finished 5-2 to Arsenal. The first one of these in particular was calamitous, as a 2-0 first half lead turned into 2-2 by half time and 5-2 after an hour. Last year at the Emirates, Tottenham started like a train, took the lead and were pummelling the home side until Arsenal bête noire Emmanuel Adebayor slid in needlessly with his studs showing, got sent off and without a forward to hold the ball up, they crumbled.

You wouldn’t expect Tottenham to fall apart like that this time. The purchases they have made this summer have strengthened them considerably and given the team a solidity and resilience they lacked last year. Paulinho has looked incredibly classy, controlling the midfield with ease and coming ominously close to scoring goals with Lampard-esque runs form deep into the box. Nacer Chadli has shown promise on the wing, while Roberto Soldado is an obviously canny forward – his movement is excellent and even if he hasn’t got the service he needs yet, he’s nonetheless scored twice in two games. He’s only going to get better as Spurs add creativity to the pace and strength they already possess.

But perhaps Spurs’s best signing this summer is Frenchman Etienne Capoue. He’s built like a tank, possessing pace, height and a strength which allows him to easily shake off opponents. Along with this he’s excellent on the ball and has made a flurry of interceptions in his three Spurs appearances so far. He looks like a snip at only €9m and also means Spurs have in Sandro, Mousa Dembele, Younes Kaboul and others a tag team of players you wouldn’t want to mess with. If you want all your limbs to remain attached to your body, that is.

In contrast to Spurs buying players in positions of need and bolstering what was a thin squad last season, Arsenal have done the opposite. In recent seasons they were flabby, with players like Denilson, Andre Santos, Marouane Chamakh and Andrey Arshavin being little more than walking, talking mannequins as they got paid handsomely not to play for their employers.

So this summer they’ve got rid of the excess weight they were carrying last year. But they’ve gone too far, and lost not just the flab but some of the muscle they need to be successful. Sending out Johan Djourou and Ignasi Miquel on loan left them with only three centre backs, and with Thomas Vermaelen injured and Laurent Koscielny suspended they were forced to field Bacary Sagna at centre back against Fulham on Saturday. They only have two genuine strikers – and one of those is Nicklas Bendtner, more a Pain In The Arse than a forward. They don’t have either a solid goalkeeper or a genuine defensive midfielder. Lukas Podolski is injured and Theo Walcott, however much he wishes he was a forward, just isn’t one.

Of course, they could buy players to fill these gaps. They can afford it. The fans aren’t hungry for signings – they’re absolutely starving. But their hunger won’t be satisfied by Mathieu Flamini arriving on a free transfer, and that’s who it looks like they’re getting.

However, as much as off the field Arsenal may infuriate supporters, on the field they have an impressive ability to recover from setbacks quickly. Their opening day loss to Aston Villa was met with convincing wins against Fenerbahce and Fulham. They are a resilient bunch.

They will need this resilience on Sunday. At home, on the back of scoring five goals the last two years in this fixture, you will expect them to attack. Walcott, for all his weaknesses, has a great record against Spurs, his pace consistently allowing him to get in behind some leaky defences. Aaron Ramsey too is playing superbly, making a mockery of the fans who have been critical of him since his return from that broken leg.

Arsenal attacking will leave them open on the counter, as Aston Villa so ruthlessly showed a fortnight ago. Spurs with their quick wingers will look to take advantage – though in both North London derbies last season, they pressed aggressively, took the game to their rivals and took their chances leaving gaps in behind. Whether they will dare to do so again, considering that they’re away from home, will be fascinating to witness.