Skip to content
8 Comments on Now or never for EvertonPosted in Premier League By By Far The Greatest TeamPosted on November 21, 2012March 20, 2013Tagged Everton 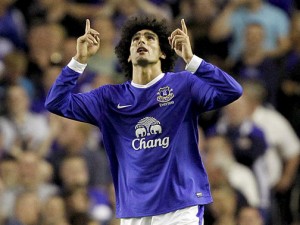 In 1980s England people talked about the emergence of a ‘Big Five’ in football, consisting of Liverpool, United, Arsenal, Tottenham, and Everton. These grand clubs were supposed to dominate for years to come, and then the Premier League happened. The emergence of Blackburn Rovers as free spending trophy grabbers was an early warning shot – England’s famous old names could not rest on their laurels.

Since then, the fortunes of the old Big Five have varied, but it is Everton who appear to have fallen furthest behind, despite the fact that they have never in their history been relegated from the top flight. Yet, their turnover in 2010-11 was only £82million. I say ‘only’, but to put that into context, it was marginally more than Sunderland (£79million) and significantly less than Tottenham (£163million), Liverpool (£184million) Arsenal (£256million), and, of course, Manchester United (£331million)

Everton are not the only club that has struggled to adapt to the new world. In truth, both of the Merseyside clubs are victims of poor leadership. In Liverpool’s case, their short-term failings in the transfer market are compounded by a long-term failure to convert their enormous popularity into higher revenues. But, Everton’s problems are more acute. They have often defied their critics to finish on the fringes of Champions League qualification, but that in itself does not ensure lucrative rewards. Everton have a small squad, and any outstanding talent that emerges is generally sold on. Sooner or later, the well will run dry. But, before it does, Everton’s allure is that of a club still dragging one foot in the past, and for someone like me who’s a sucker for nostalgia, they’re proving hard to resist.

In Bill Kenwright they have a Chairman who is a genuine fan of the club; a man who would have previously been seen as a benign character, one of the good guys, but is now cast the barrier to progress for his failure to attract investment and secure a new stadium. It’s true that Goodison Park is out of date and isn’t doing Everton any favours , but with fewer and fewer of the classic old grounds left in England, it’s worth savouring. In its prime, fans would have gazed up in awe of its grandstand as they approached via the narrow residential streets that surround it. Hopefully they still do, because no one is building stadiums in locations like that anymore.

If Goodison is a burden, then Everton’s biggest asset is surely their manager, one of the most likeable in the Premier League. In a different era, David Moyes would have accumulated several trophies by now.He is not entirely free of the irritating over sensitivity that most successful managers display. But, he doesn’t have the demeanour of one so tightly wounds as Wenger, Ferguson or Dalglish. He rarely says things that have you cursing at the TV, and that’s a pretty rare thing to say about a Premier League manager.

As for the team, who didn’t enjoy the way Leighton Baines and Kevin Mirallas owned the left flank against Liverpool (apart from Liverpool fans)? This was classic wing play, with Baines pushing on from full back, and the skilful Mirallas tormenting his marker. And, it’s not just the left flank that’s impressive. Modern football has brought many ills to our national game, but even hardened cynics must concede that a six foot tall Belgian attacking midfielder with a giant afro is not among them – presenting the absolute wonderbeast, Marouane Fellaini. And when it comes to putting the chances away, Nikica Jelavic oozes class with his deft touches and poachers instincts.

Sounds like everything’s in place then. If Arsene Wenger is right and Fourth Place in the Premier League is the equivalent of winning a trophy, then this has to be Everton’s year to claim some (metaphorical) silver. And yet, just as Champions League qualification reveals itself as a real possibility, Everton become the draw specialists of the Premier League. No clubs have a divine right to succeed, but for those of us who watch the Premier League as outsiders, the occasional change in narrative is welcome. I think most non-Arsenal fans were able to enjoy Tottenham’s dalliance with the Champions League for this reason. It gets boring watching the same clubs play the same fixtures. And there’s the small matter or unfinished business, Everton’s last title winning side having been denied the opportunity to compete in Europe following the ban on English clubs.

Notoriously slow starters, this year Everton managed to get out of the blocks a bit faster. But, they won’t keep doing it, sooner or later something has to happen to take them on to the next level, or else they risk falling away for good.