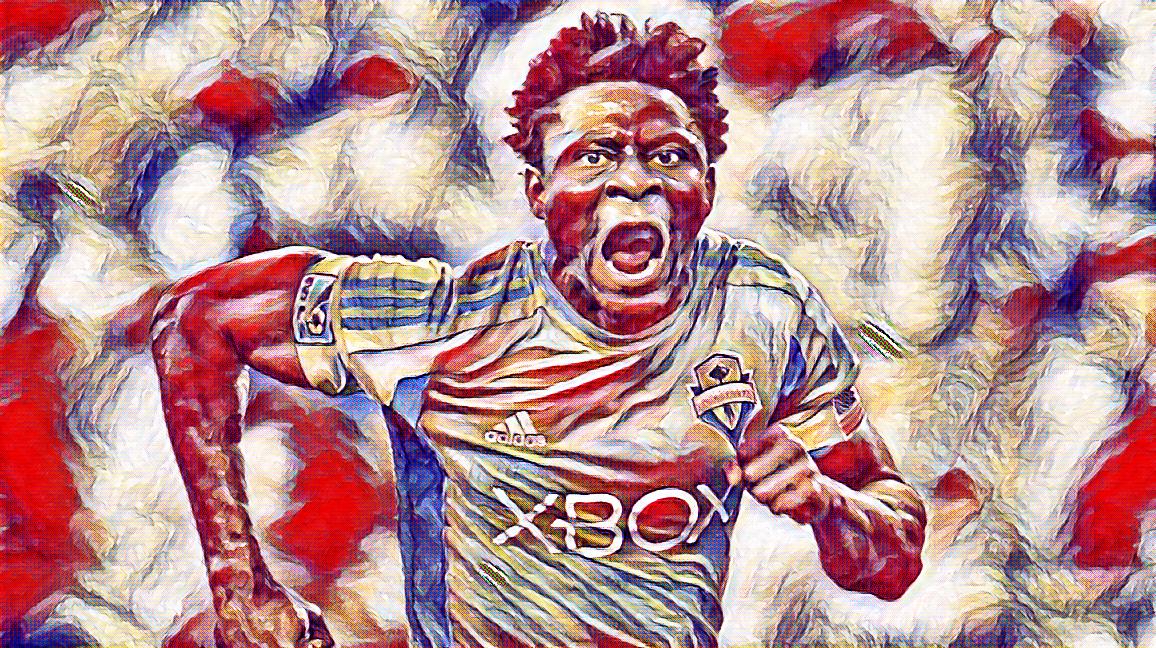 Obafemi Martins signed for Seattle Sounders in 2013. He was signed as a designated player, with the club paying $4m to buy out his contract from Spanish side Levante.

In his first season he played 20 times scoring 8 goals, however, Seattle ended the season in disappointment as they were knocked out in the playoff Conference semi-final against Portland Timbers.

But, it was the 2014 season that the Sounders and Martins excelled.

Their first five matches were a mixed bag, losing twice, drawing once and winning twice, against Sporting Kansas City and Montreal Impact, Martins getting his first goal of the season against the Impact.

The Sounders put on a winning run as they won their next five games. FC Dallas were beaten 3-2 away, as well as Chivas USA 2-1, with Martins on the scoresheet again. Colorado Rapids were hammered 4-1, followed by Philadelphia Union, Martins and Clint Dempsey scoring in both matches.

Seattle were brought back down to earth in their next match as they were resoundingly beaten 5-0 against New England Revolution.

But, the Sounders bounced back immediately, winning the next five with Martins grabbing a hat-trick in the 3-2 away win against Chicago Fire.

With Seattle pushing for a playoff place, disaster struck for the Western Conference side, as they lost four out of the next six matches, only managing wins against Portland Timbers and Houston Dynamo, both finishing 2-0.

The team needed to respond and they did just that, with Martins in fantastic form hitting five goals in five matches, including two in the 4-2 away win at Portland.

With two successive defeats versus the New York Red Bulls and FC Dallas the pressure was back on.

Martins stepped up to the plate and grabbed a couple of braces against Chivas USA in a 4-2 win and Colorado Rapids, Seattle winning 4-1.

With three games remaining the team and its faithful supporters were feeling the pressure, as they were neck and neck with LA Galaxy.

The pressure told as Vancouver Whitecaps grabbed a 1-0 away win, sending the homes fans away in desperation.

Then came the final two games of the regular season, both against LA Galaxy. The Galaxy were three points behind with a much better goal difference. It was all to play for, with the Supporters Shield up for grabs as well as a place in the playoffs.

Match 33 was at Galaxy’s StubHub Centre in front of 27,244 fans. The Galaxy started well and just before half time Baggio Husidic scored to put them 1-0 up. Five minutes after half-time and LA Galaxy had run into a 2-0 lead, Marcelo Sarvas grabbing the goal.

The Sounders needed to respond, and they did, with Dempsey scoring on 69 minutes and Lamar Neagle equalising on 72 minutes to secure the draw.

It meant the final match was all still to play for, this time at the CenturyLink Field.

A win for either side would win the shield, but a draw would still be enough for Seattle, who, in front of 57,673 fans, did not disappoint. The game was a tight affair.

Landon Donovan went close after 14 minutes but, was unable to lift the ball over the head of Stefan Frei in the Sounders goal, and at half time the scores were still level.

With the second half in full flow, Gyasi Zardes put a long-range shot just wide.

With tempers fraying, the pressure was beginning to tell on both sets of players.

Then, the goal all Sounders fans had been waiting for. On 85 minutes, Martins won a free kick, which was taken quickly and played back to the Nigerian, who played a defence-splitting ball to Marco Pappa to slot home. The noise in the stadium was deafening as the Seattle faithful knew they were just moments away from winning.

The Galaxy continued to pile on the pressure but, with the game deep into injury time, Pappa dispossessed ‘keeper Jaime Penedo who had received the ball outside his area, to slot the ball into the net.

The stadium erupted, the Seattle Sounders had won the MLS Supporters Shield for the first time.

The MLS cup playoff turned into disappointment. Having beaten FC Dallas over two legs on away goals they faced LA Galaxy in the two-legged Conference final.

The first leg was at the StubHub Centre.

The Galaxy managed to stay in control of the match pinning the Sounders in their own half for the majority of the half as the whistle was blown for the break.

The second half started in the same fashion but, it was Seattle who came close on 50 minutes. Dempsey and Martins combined well, setting up the former, whose shot was well saved by Penedo.

Frei was called into action two minutes later as he saved a shot which took a big deflection off Leo Gonzalez, but his luck ran out seconds later after Marcelo Sarvas’ 15-yard shot hit Chad Marshall and deflected into the net.

The goal was the only one of the match as LA Galaxy took a 1-0 lead to Seattle for the second leg.

In freezing conditions, it was Seattle who scored first. Martins and Dempsey both combining again for Dempsey to score in an empty net after beating Penedo to the ball on 26 minutes. With the fans buzzing with hope, the belief was that they could win the match and go through to the MLS Cup final.

Six minutes later the fans were ecstatic as the Sounders extended their lead. Clint Dempsey scored on the half-volley into the net. It was now advantage Seattle as they took a 2-1 lead on aggregate into halftime.

LA Galaxy came out fighting for the second half and the goal eventually came on 54 minutes. After a Galaxy corner was half cleared, the ball fell to Juninho, who hit a stunning shot into the net of the left-hand post, to leave the home crowd stunned.

It was enough for the Galaxy to win the match as they went through on away goals.

A disappointing end for Seattle and Martins who had produced some entertaining football.

It was, however, a great regular season for Martins and the team. Martins, in particular, had forged a fantastic partnership with Clint Dempsey up front, as both scored regularly throughout the year.

Martins scored 17 goals and made 13 assists in his 31 appearances as Seattle won their first Supporters Shield title and also won their fourth US Open Cup trophy.

For Obafemi Martins, he finished second as MVP for the season, behind LA Galaxy’s Robbie Keane.

His goal scoring and assists had helped propel the Sounders to the Supporters Shield, although they came up against a strong Galaxy team in the Conference final.

Martins stayed at the club for one more season making 21 appearances scoring 15 times and six assists but, despite finishing fourth and qualifying for the playoffs they were knocked out in the Conference Semi-final by FC Dallas.

In total over the three seasons, the Nigerian scored an impressive 43 goals in 83 matches, before he moved to Shanghai Shenhua in China.

Martins had lost none of his goal scoring ability and was a fantastic addition to the Seattle team. He still possessed his speed and power from his Newcastle days and his battling qualities would scare the life out of some MLS defences.