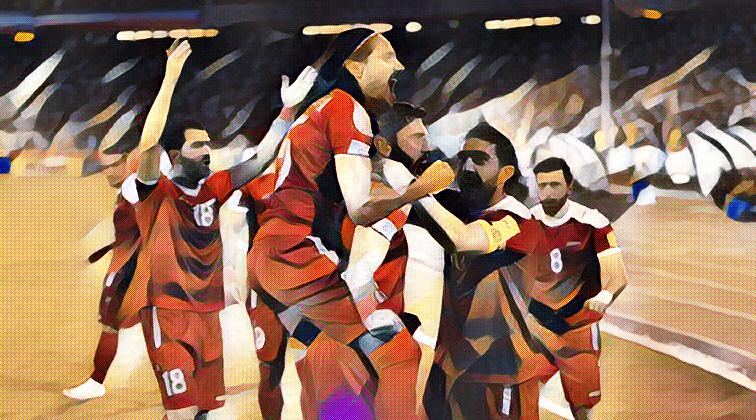 Modern day football is never too far away from controversy, conflict and corruption, which makes the uplifting stories that little bit more special. The rise of the Syrian football team is just one such story. The war-torn nation, after a series of gruelling affairs both on and off the pitch, face Australia tomorrow night as they continue chasing their dream of a place in the most prestigious competition in world football; the World Cup.

This incredible story of both joy and passion began way back in June 2015, when Syria ventured on their arduous journey in their first 2018 World Cup Qualifying game, beating Afghanistan 6-0 in Mashhad. Seven games, five wins and 20 goals later, Syria found themselves sitting comfortably in second place in a group topped by 2002 co-hosts Japan, with Singapore and Cambodia completing the group.

Unlike European qualification, where nations reach the glorified competition after just one round of qualifying, Syrian were now drawn into Round Two of Asian Qualifying, and found themselves thrown into the mix with Iran, South Korea, Uzbekistan, China – a nation aiming to dominate world football within the next 50 years, and finally Qatar – what else could be said of them, other than their alleged corruption in their successful bid to host the competition in 2022.

Syria however were certainly not bowled over by their supposedly powerful opposition, and instead took Group A by the scruff of the neck and shocked the footballing world in doing so. It certainly wasn’t plain sailing in the beginning however as they picked up just eight points from their opening seven games, losing to eventual group losers Qatar and lowly Uzbekistan. As the extremely competitive group reached the closing stages in the summer of this year, the Syrians were on the brink of elimination, yet they refused to give up.

A 2-2 draw and a 3-1 victory over China followed in June and August respectively, yet their real heroics were savoured for the last encounter with Iran, a nation – managed by former Manchester United man Carlos Quieroz – who had already qualified for the prestigious competition, and had not conceded a single goal in nine previous qualifying games. Their story in its own is filled with inspiration and delight, yet Syria ensured they shared the spotlight with a dramatic finish in Tehran, where forward Omar al-Somah scored with the last kick of the game to secure a 2-2 draw, and with it, third place in the group on goal difference. This sensational result ensured the upcoming tie with the Socceroos, while simultaneously sending the Syrian commentator covering the game into delirium as he broke into tears.

The celebrations were of course not reserved for the fans inside the stadium, as the calmly-taken 93rd minute winner was projected on big screens across public squares in the capital Damascus, where fans also filled local coffee shops and sports halls to watch the highly-anticipated affair. The blissful sound of the final whistle brought the city centre traffic to a standstill as residents from near and far danced and sang in the streets, waving the country’s flag as fireworks filled the sky above them.

Amazingly, the result fell on the same day troops reached Deir el-Zour in Eastern Syria, breaching a lengthy siege on government troops by Islamic State militants, and so arrives the unwelcome and worrying political undertones that often found themselves interconnected with the national football team, a feat that cannot be shaken off by many players and fans despite such a jubilant journey.

This nation – unlike many of its counterparts well on their way to Russia for a mere football tournament – is riddled with negativity, epitomised by the incredibly fact that they haven’t played an international home game in Syria since the war broke out in 2011. Instead, the national team made a 9,000-mile round-trip to Malaysia to play their “home” games throughout the hugely successful and remarkable qualifying campaign, and that’s exactly where they will face Australia in the first leg of the playoff at 20:30 local time tomorrow evening. Despite preferred locations of Qatar or the United Arab Emirates, these players – with ‘Syria’ rather than their names inscribed on the back of their red jerseys – will once again walk out with the aim of upsetting all the odds.

And what of the inspirational players themselves? In a squad full of togetherness and passion, some undoubtedly stand out more than others. Syria’s squad list is dwarfed by both former and current English Premier League players in Tim Cahill and Aaron Mooy, among several others in a talented Australian outfit, yet they undeniably make up for it with several uplifting and incredible personal stories. Star midfielder Zaher Midani has an Iraqi league title and an Asian Football Confederation Cup to his name, while 24-year-old Mahmoud Al-Mawas has six qualifying goals to his name, equalling none other than Celtic’s Tom Rogic and Borussia Dortmund’s Shinji Kagawa.

Then there’s the last-gasp match winner of Iran, Omar al-Somah, who has spent the majority of the past five years in self-imposed exile for political reasons, there’s the veteran 34-year-old captain Firas Al Khatib joining al-Somah up top, and finally there’s Hadi Al Masri, a star performer thus far, yet has been capped just seven times for his country after making his debut at the age of 30, an unthinkable feat for any other nation competing to fight for a spot in the World Cup. Meanwhile, manager Ayman Hakeem undoubtedly deserves huge credit for guiding his squad to these astounding heights.

With many fans in favour of the nation’s astonishing achievements – those chanting the name of President Bashar Assad – there are inevitably those that oppose his reign, and thus opposing a team that allegedly represent his government. And so, the team are unfortunately never far from controversy despite their heart-warming tale.

And just when this remarkable journey seemingly couldn’t be further from reality, a fourth and final qualifying round awaits Syria should they somehow defeat Australia. The fourth-placed team from the Confederation of North, Central American and Caribbean Association Football (CONCACAF) will match up with these Syrian heroes should they make it, and the team currently sitting in fourth with just two games remaining? The United States of America…