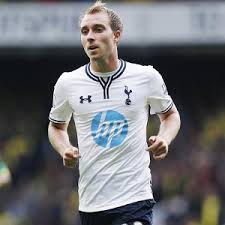 Both clubs too have kicked off the season splendidly, winning four of their first five league games. Arsenal are averaging more than two goals a game, while Spurs have conceded only one goal in five. Tottenham winning 1-0 a lot (thrice in five matches) and Arsenal scoring plenty but also conceding plenty is a Freaky Friday style swapping of what both clubs have tended to do in their respective histories. “1-0 to the Arsenal” may soon become “1-0 to the Tot-ten-ham.”

Neither club are used to players of the calibre of Özil and Eriksen. Arsenal have little or no experience of signing top players who are already established stars, while Spurs haven’t had a true no.10 in years and no true playmaker at all in their lineup since the departure of Luka Modric. Their most creative player last season was Tom Huddlestone and he has the dimensions of a garden shed.

Both in their own way were desperately needed transfers. Arsenal needed to make a statement to appease the sort of fans who boo when their team is behind in pre-season friendlies, to show they weren’t going to just stagnate and continue not winning trophies. For too long now, they have been lacklustre, becoming a glorified selling club as their best players depart for clubs where they actually win things. This feeling of drift and a gentle but definite decline needed to be curtailed – in signing one of the best attacking midfielders in the world, they have done just that.

Spurs needed Eriksen to provide creativity in the final third, so that they wouldn’t remain the philistines of the Premier League, all pace and power with no guile to create chances. The Dane is a player who will surely create chances. They also needed to adequately replace Gareth Bale, and atone for his departure by strengthening the squad and giving Andre Villas-Boas the type of players he wants. In signing Eriksen and six others, that’s what they have done.

Özil and Eriksen playing in the same position, arriving in the same transfer window and playing for rival clubs has led to the question being asked – who got the better deal?

Özil is unquestionably the better player at the moment – a truly world class talent who finds creating goalscoring chances laughably easy. If Theo Walcott wasn’t the perennial disappointment he has been always will be, he’d have left his debut against Sunderland with about five assists and not just the one he had for Olivier Giroud’s opener. With Walcott absent against Stoke, he had a hand in all three Arsenal goals. On the pitch he doesn’t just make them a better team but gives them more of a swagger, an increased belief that they can challenge for honours.

As good as he is though, he’s three years older than Eriksen. He’s also more expensive to the tune of £30m and wasn’t needed as badly on the pitch as the Danish starlet was. Arsenal didn’t have to have another attacking midfielder – Spurs genuinely did.
Arsenal signed Özil l simply because he was available after Real Madrid signed Gareth Bale and had not just a world record transfer fee to pay off but a surplus of attacking players. They didn’t need him and until Bale had actually moved to Madrid, had no chance of getting him. It was a move borne out of opportunism and a desire to make a statement.

Eriksen meanwhile was the opposite, a badly needed acquisition on the pitch. Spurs only scored twice in their opening three league games, both of those penalties. Not only did they not score in open play, they barely created a genuine goalscoring opportunity either. It wasn’t a case of missing chances, simply one of not creating any.

They needed someone to fashion chances, to utilise the good movement of Roberto Soldado playing on his own up front. If his display against Norwich is anything to go by, he will do just that. In the Europa League against Tromso, he even scored a goal reminiscent of Bale, smashing home from twenty five yards. At only £12m from Ajax, he couldn’t have been better value if he came from Lidl.

Özil is the better player. He will likely contribute more goals and assists by the end of the season. He also has more money, plaudits and umlauts in his name. But is he the better signing of the two? No. He’s much more expensive, and he isn’t as important to Arsenal on the pitch as Eriksen is to Spurs. If Özil were to get injured, there are a surplus of attacking midfielders who can replace him. Tottenham only have Lewis Holtby.

Both are terrific players who the Premier League are lucky to have. Both too are excellent signings in their own right. But Eriksen, because of his worth to the team and his (lack of) worth in the transfer market, gives Tottenham the edge in this particular squabble between the two North London clubs.