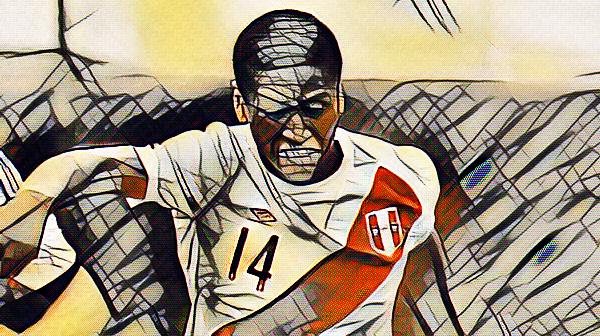 Ricardo Gareca, who is Peru’s current manager was appointed in March of 2015. At the beginning, he used what was left from Sergio Markarian’s team, who was the previous manager in World Cup qualifying. There were only a few modifications for the Copa America 2015 and the beginning of the qualifiers for the FIFA World Cup 2018 in Russia.

The frontline was long referred to as “the fantastic 4”. This frontline consisted of Jefferson Farfan, Paolo Guerrero, Claudio Pizarro and Juan Manuel Vargas.

Vargas played as a left back when he was still around in Gareca’s team but, played higher up the wing prior to that. These players, however, were undetermined and unprofessional, Paolo Guerrero the exception. Many managers were struggling with tactics just to fit them all in, and the results weren’t good. All four are also aging players as they are all over 30. After a poor start to the campaign, Gareca decided that enough was enough. In June, the Copa America Centenario began and the team was completely redone. 6 of the 23 players were still playing their football in Peru and of the fantastic 4, the only one who remained was Paolo Guerrero. Most of these players were under 23 and they were the ones deemed the most promising for the future of the national team.

Edison Flores, Andy Polo and Renato Tapia are perhaps the most exciting under 23 prospects that are playing abroad, with Edison Flores playing for Alborg in Denmark, Andy Polo with Mexican side Monarcas Morelia, while Renato Tapia is at Dutch giants Feyenoord. The best under 23 player still playing in Peru is probably Pedro Aquino.

Pedro Aquino is currently 22, with his birthday being only a few days ago. He’s a defensive minded midfielder who can play in the centre of midfield, or deeper as a defensive midfielder. He was born in Lima and is currently playing for Sporting Cristal. He joined Los Cerveceros at just 9 years of age and made his first division debut in 2013. One of the players he was friends with as a child at Sporting Cristal was Renato Tapia. Renato Tapia went on to play for EGB (Esther Grande Bentin) while Pedro remained in Rimac with Cristal. Aquino won the best player from 1995 in the Noche de Estrellas in 2010, which is the awards night for the Copa Federacion, the most important youth tournament in the country.

Pedro Aquino is Cristal’s workhorse. He plays behind the two central midfielders and in front of the two central defenders, although he’s not sitting too deep. He’s a player that likes to play with freedom. He’ll roam around the pitch depending on the tempo of each attack and will look to win the ball back when given the chance. While he’s a defensive minded midfielder, he also has some attacking elements. To begin with, his passing is decent. He won’t make many excellent passes or assist that often, but he won’t misplace many either. On top of that, he’s intelligent with his decisions. His vision is decent, so he’ll play a long ball if he sees some open space to an overlapping player. If he doesn’t see any space, he won’t take any risks and make a short pass to a player near him. His technical ability is good enough to perform crosses and long balls so he’s more gifted than a lot, if not all defensive midfielders in Peru. If there is any comparable player in the top European teams in terms of style, it would be Javier Mascherano. A defensive minded midfielder who likes to roam around and win the ball back. Good off the ball and has solid concentration levels as well as a decent to good technical ability. This is Mascherano as a midfielder and not a defender like he sometimes plays at FC Barcelona.

We talked about Pedro Aquino’s style of play. What are his strengths and weaknesses though? Starting off with what he’s good at. His anticipation of the ball is superb as he’s always in a good position, running in after an opposition pass to surprise the receiver and win the ball back. His tackling is also excellent. As a defensive minded midfielder, he’s going to get carded now and then but he’s generally a clean player and doesn’t get booked too often (1 yellow in 9 league games). This is because his timing in the tackle is great and he wins the ball back fairly most of the time. Anything to do with defensive minded off the ball movement, Aquino has it. Aquino’s work rate is superb. As mentioned in terms of his style, he likes to roam around instead of sitting in front of the defence when attacking. When the opposition attacks, he positions himself well and reads the situation in terms of who he needs to mark. His closing down is intimidating in the sense that he can force a lot of misplaced passes from the opposition. Lastly, when the other team have the ball he sometimes wins it back higher up the pitch which starts dangerous counter attacks and a chance for goal. All these things he does on a consistent basis. As for weaknesses, it’s hard to name them. He’s one of the best players in the league and likes to play it safe. He doesn’t attempt the things he doesn’t know how to do. His technical ability isn’t excellent but it’s not a “weakness”. He likes to play to his strengths and isn’t too ambitious with his technical ability.

Pedro Aquino wasn’t called up to the Copa America Centenario, but he was called up the next international break for the matches against Bolivia and Ecuador. Since then, he’s been getting a few games although he’s only started against Bolivia and Brazil. He’s been coming on as a substitute and has shown a lot in those minutes. He’s a key player for Sporting Cristal though and he’s been impressing these last 2 years. At 22 years of age, he can only get better. He’s been rumoured to go abroad in recent days and it’s no big surprise really as he’s been consistently good for his club and country. He’ll likely stay the year at Sporting Cristal and then move abroad.