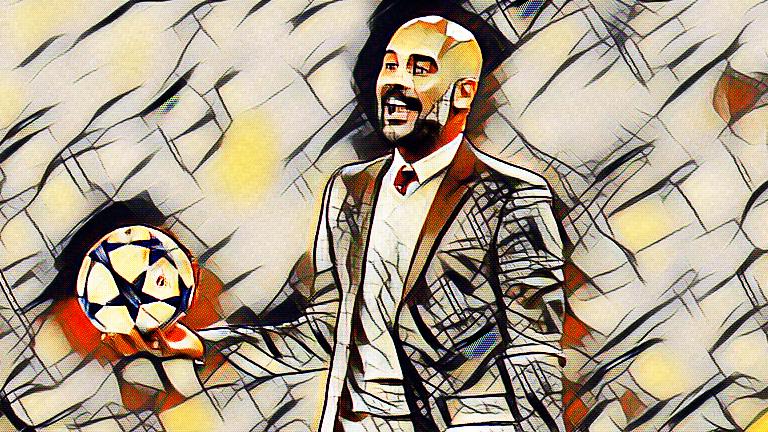 The 18th May 2008 was a bittersweet day in FC Barcelona’s incredible history; Real Murcia were beaten 5-3 on the last day of the 2007-08 La Liga season in a thrilling game at the Nueva Condomina but the win only cemented third place for Frank Rijkaard’s side, with the Dutchman set to depart only two years after delivering a UEFA Champions League title.

Bernd Schuster’s Real Madrid finished as league champions – Villareal stole an unlikely second-placed finish, with Barcelona an astonishing 18 points behind their arch-rivals in third. Rijkaard’s position as manager at the Camp Nou became untenable under president Joan Laporta. It was announced that Rijkaard was to leave his post after a humbling 4-1 defeat to Real only a few weeks previous, with club-legend Pep Guardiola set to replace him.

The Spaniard spent over a decade at Barca as a player from 1990, winning the European Cup, the UEFA Cup Winners’ Cup, the UEFA Super Cup and a hatful of domestic trophies. His position as part of Johan Cruyff’s “Dream Team” that won four consecutive league titles cemented his place in club folklore, which aided his return as coach of the B-team nearly ten years later in 2007. Assisted by Tito Vilanova, Guardiola guided his side to the Tercera División title, which made him the prime candidate to manage the senior squad after Rijkaard’s departure.

Guardiola’s task was simple; he had to find a way of breaking Real’s dominance of La Liga, whilst matching Rijkaard’s success on the European stage. In order to do that, changes had to be made to the first-team squad. A major cull was needed, whilst fresh faces had to be bedded in to hit the ground running.

Guardiola determined who he believed was responsible for the club’s lack of success, and decided to cash in. Ballon d’Or and two-time World Player of the Year winner Ronaldinho was sold to Italian giants AC Milan for a deal that totalled €25 million. Gianluca Zambrotta, a World Cup winner with Italy, also left for the San Siro. Lillian Thuram, who was part of France’s all-conquering side of the late 20th century, was also offloaded, as was Portuguese midfielder Deco to Chelsea.

In less high-profile moves, Edmílson moved to Villareal on a free transfer after Barcelona decided to not renew his contract, and Oleguer was shipped to Ajax. Giovani dos Santos, who scored a hat-trick in Rijkaard’s last game as manager, moved to Tottenham Hotspur despite his glowing reputation as a future La Liga star. Guardiola had trimmed the squad, and dismantled much of the 2006 Champions League-winning side; his future as manager and the state of his reputation at his boyhood club depended on whether he was to be proven right.

Ronaldinho managed only 76, largely mediocre by his standards, Serie A appearances for Milan in what was a dramatic, and sad, fall from grace for one of the world’s greatest football showmen. His lifestyle and perceived lack of dedication led to Carlo Ancelotti, the Rossoneri’s manager, reducing him to a place on the substitutes’ bench for much of his time in Italy before he returned to Brazil with Flamengo.

But in truth, his loss of form and physical fitness became apparent towards the back end of his time at Barcelona. Lionel Messi, who ten years ago was still finding his feet at the Camp Nou after a difficult spell on the sidelines with consistent muscular injuries, was labelled as Ronaldinho’s in-house replacement. Messi was nicknamed “Messiah” by the Spanish media; it seems bizarre now, but at the time fellow young forwards Bojan Krkic and dos Santos were also tipped to reach the same dizzying heights of Catalunya’s favourite son.

However, Guardiola focused his attention on the Argentine and decided to build his new-look team around him. In the summer of 2008 after Guardiola’s arrival, Messi was handed a new contract worth €7.8 million per year, which made him the club’s highest-paid player. He was also given Ronaldinho’s famous number 10 shirt, a true measure of the faith Barcelona, and particularly Guardiola, had in him.

Between 2006 and 2008, Messi’s formative years as a senior player, he missed eight months’ worth of competitive football with muscular injuries. To combat the issue, Guardiola introduced new training, nutrition and lifestyle regimens, and employed a personal physiotherapist that shadowed Messi, even when he was travelling with the Argentina national side. Ahead of the 2008-09 season, Guardiola’s first campaign as manager, all eyes were on the Catalan giants as they looked to regain their domestic and European titles.

Guardiola’s first league game as manager was against newly-promoted side Numancia at the Pajaritos. Barcelona, despite entering the game as overwhelming favourites, lost 1-0. But, the loss kick-started their season; a run of 22 league games without losing followed, which began in mid-September and finished the following February at the hands of Catalan-rivals Espanyol.

Barca’s incredible form came as a result of Guardiola’s unpredictable 4-3-3 system that was built around Messi. Thierry Henry was used as a left forward, with Samuel Eto’o down the middle and Messi on the right. Guardiola’s replacement for Zambrotta, Dani Alves, was utilised as a wing-back with a license to go forward which allowed Messi to drift inside onto his stronger left foot with the confidence that his new teammate was providing enough width to keep the opposing left-back occupied.

There were further subtleties to the setup; in attack, it was not uncommon for Eto’o and Messi to switch positions which saw the Cameroonian striker used as a right forward, with Messi coined as a false-nine. Club graduates Andrés Iniesta and Xavi were partnered in midfield in Deco’s absence, with Sergio Busquets in a deep-lying role behind them. Busquets was part of Guardiola’s successful B-team; the pair moved to the senior squad at almost the same time, with Busquets making his second debut under Guardiola in September 2008 to replace Edmílson at the base of the midfield.

At the back, Gerard Piqué, who was re-signed for a mere €5 million from Manchester United, was proving to be a youthful yet worthy replacement for Thuram. The Spaniard spent seven years at Barcelona as a youth player before moving to Manchester United. His made only 12 league appearances in four seasons under Sir Alex Ferguson before returning to Spain to partner Carles Puyol at the heart of the defence. The risk of throwing a relatively inexperienced defender straight into the team was one of many that paid off for Guardiola; his side conceded just 35 goals during the 2008-09 season, eight less than the season before.

The revolution also made Barcelona more potent in attack. Henry, Eto’o and Messi scored a combined 100 goals in all competitions, which at the time was a club record, with Messi top-scoring with 38. After an emphatic 4-1 victory against Málaga at the Roselda on 1st November 2008, Barcelona were not displaced from the summit of La Liga; they won 27 out of 38 league games as they romped to the league title.

Perhaps the greatest measure of Guardiola’s impact as manager is the massive points-swing at the top of the league between the 2007-08 and 2008-09 seasons. In Rjikaard’s final season, Barcelona finished on 67 points, 18 points behind title-winners Real on 85. A year on, the tables turned – Barca eclipsed Real’s total a season previous and scored 87 points, which put them nine points clear of their famous enemies.

The manner of Barcelona’s victories against their main title rivals also showed that Guardiola’s new-look side were a class above the rest. Atlético Madrid were beaten 6-1, Sevilla (who finished third) were thrashed 4-0, and perhaps, most pleasingly for all Barcelona fans, Real were thrashed 6-2 in their own back yard at the Santiago Bernabéu in May 2009.

The victory all-but sealed Barcelona’s first league title since 2006.  Doubles from Henry and Messi, as well as goals from Puyol and Piqué, represented a dramatic change in fortunes for the Catalan giants compared to a season previous – but they were not finished there.

Having finished the 2007-08 season without a trophy, an unprecedented failure by Barcelona’s meteoric standards, Guardiola’s side looked to conquer on all fronts. Just a few days after thrashing Real, Chelsea hosted Messi, Henry and Eto’o and co. in a memorable Champions League semi-final second leg. After drawing 0-0 in the first leg, the world watched the return tie with baited breath to see who would meet Manchester United in the final. Sir Alex’s Red Devils had already beaten Arsenal 4-1 on aggregate in the other semi-final.

Michael Essien opened the scoring for Chelsea with a thundering volley from outside of the area inside the first ten minutes. Barcelona rode their luck, and perhaps could have fallen further behind after referee Tom Henning Øvrebø waved away strong Chelsea penalty claims. Against the run of play, Iniesta scored a dramatic last-gasp equaliser to send Barcelona through to the final via the away goals rule deep into added time.

But the goal and place in the final was a reward for Guardiola’s demand for greater professionalism, athleticism and fitness at the beginning of his tenure as manager; Iniesta was a major benefactor of the new coach’s methods and ideas, having largely been on the periphery behind the likes of Deco in the early years of his career. Before the Champions League final, Barca met Athletic Bilbao in the 2009 Copa del Rey final; the Catalans ran out 4-1 winners to win Guardiola’s first piece of silverware as the senior side’s manager, before sealing the La Liga title despite losses to both Real Mallorca and Osasuna.

Sir Alex’s United, who boasted the talent of Cristiano Ronaldo and Wayne Rooney in the attack, were no match for Barca. Eto’o and Messi switched positions, which confused the United back-line that included the unrivalled experience of John O’Shea, Rio Ferdinand, Nemanja Vidić and Patrice Evra. Eto’o opened the scoring in the first half after cutting in from the right-side to fire into the near post, before Messi sealed the tie late on. His deep-lying forward position allowed him to ghost into the area and finish with his head unmarked to cap a record-breaking season for Barcelona; they became the first Spanish side to complete a treble, and in doing so, Guardiola became the youngest coach to win the Champions League. It was a fitting end to an impressive first season as a manager, in which his bold decisions off the pitch and creative tactical ideas on it had delivered incredible success.