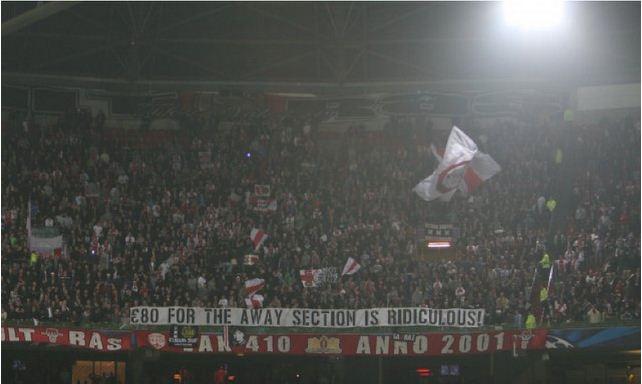 On the pitch, Ajax might not have shown any sympathy for Manchester City last night, comfortably beating them 3-1 as the group stages reach the half-way mark, but off the pitch they were united in their thoughts about the price of tickets.

Ajax, knowing that English fans would certainly sell out the away end, charged City fans an incredible £65 for their ticket. Fans of Real Madrid and Borussia Dortmund, who join them in the ‘group of death’, were charged almost £15 less for the same seats.

An Ajax spokesman denied that they were taking advantage of English fans and insisted the price difference was simply because this match was ‘the most interesting of the group stage’.

“We admit that it is a lot of money,” he said. “But the champions of the best league in the world are visiting Amsterdam. Of course, Real Madrid is top class as well, but this is the third year in a row that we are in the same group as Real. Therefore they are one level lower in terms of the price scheme.”

During the game last night the home end unfurled a banner showing their support for Manchester City’s plight.

The story of Mario Balotelli… so far – why always him?