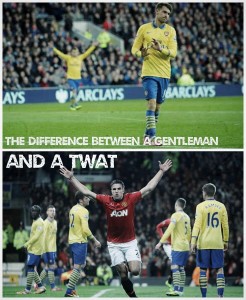 Aaron Ramsey scored two goals against his former club at the weekend but humbly refused to celebrate either of them.

This has lead Arsenal fans to compare his behaviour to that of Robin van Persie’s before the International break. He put Manchester United 1-0 up in the first half, ensuring he had scored in all three of his games against his former club, and went on to celebrate wildly.

In both games last season he refused to celebrate his goals, paying respect to the fans who had watched his career for the past eight years. However, his behaviour was met with chants calling him a cunt and a rapist. It stands to reason that Van Persie would not feel there was any issue over him celebrating a goal against Arsenal this season.

Had Cardiff fans been singing about Ramsey being a cunt or a rapist all game, then maybe he would have felt more inclined to celebrate. As it was, they applauded him, making it very easy for Ramsey to reciprocate that respect.

Still, Arsenal fans have responded by claiming Van Persie should take a leaf out of Ramsey’s book. It looks like that Guard of Honour Arsenal players gave Van Persie after United’s 20th title win hurt more than we could have anticipated…