Skip to content
2 Comments on PICTURE: Chelsea and Arsenal legends show loyalty is a thing of the pastPosted in Premier League By By Far The Greatest TeamPosted on August 3, 2014July 14, 2017

Cesc Fabregas was a hero amongst Arsenal fans. Even when he left them and returned to Barcelona, he was still regarded as a legend… unlike Robin van Persie who was a “Judas”.

When Fernando Torres left Liverpool for Chelsea, Fabregas was quick to come out and claim that he would never sign for another English club.

However, last summer, Fabregas was open to joining Manchester United, only for Ed Woodward to offer a paltry £30m for him. Having remained silent all summer, Fabregas only spoke out to confirm his desire to stay at Barcelona once the Spanish club rejected a bid for him.

This summer, he signed for Arsenal’s rivals, Chelsea, and Jose Mourinho said he didn’t need much convincing to snub his former club for the blues.

“How did I persuade him? I spoke to him for about 20 minute,” said Mourinho. “I think he really wanted to come. Arsenal had an option where they could interfere, but I don’t think he was open to that. He was in our direction so it was easy for me.”

Fabregas isn’t the only one though. Frank Lampard rejected the chance to stay at Chelsea, the club where he is regarded a legend, for a massive pay day in America. Despite playing 40 games for Chelsea last season, showing he clearly has a few more years in him, he opted to effectively end his career by signing for a club in the US that doesn’t even exist yet.

Last May, Lampard revealed that a few Premier League clubs tried to sign him, but that he couldn’t join them because of his loyalty to Chelsea.

“There were a couple of opportunities to stay here in the Premier League but I can’t imagine playing for anyone else after being 12 years at Chelsea,” said Lampard. I’ve got a lot of respect for a lot of other Premier League clubs, particularly the top ones, but I couldn’t have done that.”

Lampard has just signed for Manchester City on loan. 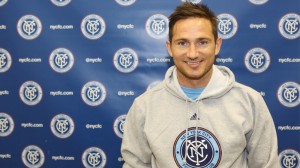