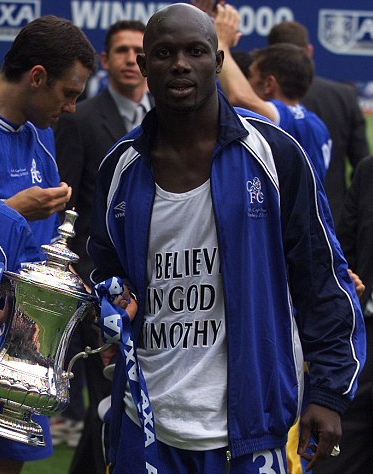 After winning the FA Cup with Chelsea in 2000, George Weah revealed a message on his t-shirt for his newborn son which said “Believe in God Timothy”.

13 years later, Timothy Weah is now on trial at Chelsea.

“He is talented,” Weah told talkSPORT. “We just wanted to give him the opportunity and we also want him to enjoy the game he has passion for. I brought him to Chelsea just for a trial and for a different experience. When I left London, I kept ties with Chelsea and when my son wanted to come to England to play, the first person I called was my daddy, Gary Staker [the club’s liaison officer]. Gary made it happen and Timothy is enjoying it. He has started training already and he is happy.”

If Mata and Mikel didn’t hear Clattenburg insult, which Chelsea player did?

Golden Shoe Award Winner to Close the Transfer This Week