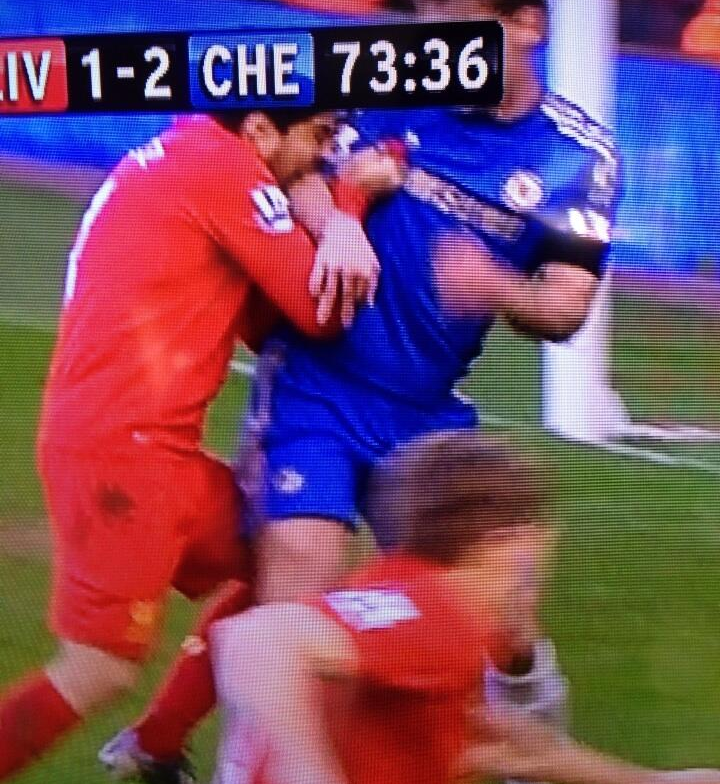 During the game between Liverpool and Chelsea at Anfield today, Luis Suarez was caught on camera biting Chelsea defender Branislav Ivanovic.

Suarez conceded a penalty in the game, which Eden Hazard scored to put Chelsea 2-1 up, after handling the ball in the area.

This isn’t the first time Suarez has bitten an opponent. In 2010, when he played for Ajax, Suarez was banned for seven games for biting PSV Eindhoven midfielder Otman Bakkal’s shoulder. The incident happened in stoppage time after referee Bjorn Kuipers showed Ajax’s Rasmus Lindgren a straight red for a tackle on Ibrahim Afellay. Suarez argued with Bakkal, who stood on the Uruguayan’s foot, prompting him to bite the PSV midfielder’s shoulder, although the incident was missed by the referee. When dishing out the seven match the Dutch Football Federation said they had taken the player’s previous conduct into account. He still had a suspended one-match ban hanging over him following a red card in the season-opening Johan Cruyff Bowl match in July.