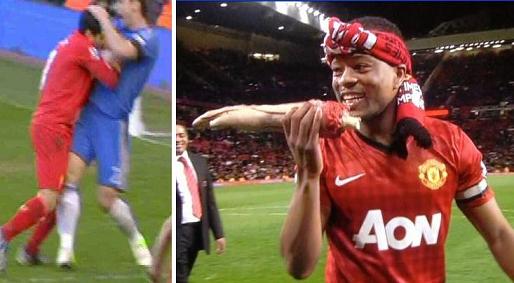 As Manchester United players did a lap of honour around last night, following their 3-0 victory over Aston Villa to confirm their title win, something was thrown on the pitch in the direction of Patrice Evra.

Evra, who captained United last night, picked it up and posed for the cameras. Closer inspection reveals that it is a plastic bitten off hand. Whilst normally this would be very bizarre behaviour, in light of Luis Suarez’s recent charge for biting Branislav Ivanovic, it makes more sense.

Suarez was found guilty of racially abusing Evra last season after admitting he called the United defender a “negro” during a row. The indepedent panel dismissed his defence that the use of the word was meant in a “friendly” way, given that it was said in the middle of a row after Suarez had kicked Evra in the knee.

When the Evra and Suarez came face to face for the next time, Suarez refused to shake Evra’s hand, much to the embarrassment of Liverpool FC. Both the club and player issued an apology for his behaviour, although neither ever said sorry for the racial abuse.

Suarez is unlikely to play for the rest of the season meaning that Robin van Persie will almost certainly claim the golden boot. To further rub salt in the wounds, Evra was more than happy to take the mick out of Suarez’s latest scandal.