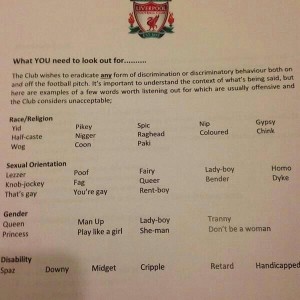 Having suffered the humiliation of their star player being found guilty of racially abusing Manchester United’s Patrice Evra, Liverpool have taken precautions against further poor behaviour.

Luis Suarez admitted he used the word “negro” when interviewed by the FA, but claimed he meant it in a friendly way. After footage showed the two players arguing, Suarez kicking Evra in the knee, pinching him and slapping him around the back of the head, an independent commission deemed his defence was a lie.

Following the case, a Liverpool fan at Anfield was caught on camera doing monkey impressions at Evra. When in court, he claimed he was doing a “caveman dance”, and he was also deemed a liar.

Liverpool have spelt out the words they deem to be unacceptable… but for some reason “negro” is missing from the list.

Manchester United’s midfield – Top to bottom then back again