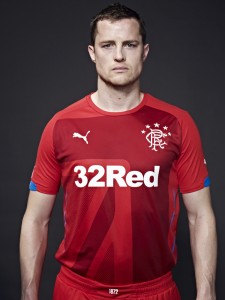 PUMA® unveiled Ranger’s new third kit, which will be worn by the team throughout the 2014/15 season and on their pre season tour of America and Canada.

Grounded in heritage but designed with innovation, the kit meets the demands of both players and fans. The design features tipping on the sleeve cuffs, with 1872 detailing celebrating the year that the club was founded.

The kit also features all of the technological excellence expected from a PUMA kit including heat transfer tapes that run down the body, and Dry Cell technology. Dry Cell technology enhances body performance by dragging moisture away from the body, improving air-flow and keeping the body at the ultimate performance temperature so you can keep cool through game time, added time, any time, every time.

Graham Wallace, Chief Executive Officer, Rangers FC, said “Since PUMA joined us as our official supplier, and the official licensee of replica merchandise, last season we’ve been delighted with both the quality and design of their performance apparel. Both players and fans loved last season’s kits and it looks like this season’s, led by the third kit that we’re revealing today, are set to be just as popular.”

Ruth How, UKIB Marketing Director for PUMA, said “Rangers is a club with a rich and iconic history, and one with which we are very proud to be a partner. We’re delighted to be able to provide the players with the highest standards of design and technical performance for the 2014/15 season. After the club’s unbeaten season last year we hope that this kit will accompany Rangers on another step towards restoring their place in the top tier of Scottish football.”