Skip to content
1 Comment on POLL: Should Chelsea pay damages to Clattenburg?Posted in Premier League By By Far The Greatest TeamPosted on November 23, 2012July 11, 2017Tagged Chelsea, Mark Clattenburg, Racism 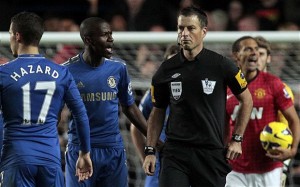 The conclusion that everyone expected from the Mark Clattenburg racism case was revealed yesterday, with the FA deeming that the referee didn’t have a case to answer.

Ramires claimed that Clattenburg said “shut up you monkey” when having a discussion with John Obi Mikel about decisions in the game. Despite Ramires being further away than Mikel, he was the only person who claimed to hear the racist slur. It took the FA two weeks to establish with Ramires on the video footage when the supposed insult took place, but the footage didn’t support Ramires’ claim. The three other match day officials, who could hear every word Clattenburg said during the game, were all adament that he didn’t use the word “monkey”.

The FA will not be punishing Ramires as they believe he made the accusation in good faith. His grasp of the English language is poor and they have judged that it was just a misunderstanding. The FA also won’t be punishing Chelsea for making a false accusation as they are obliged by law to take seriously any accusation of one of their employees. The only person who is set to be punished is Mikel, who reportedly said “I will break your f**king legs!” to Clattenburg in his office after the game.

However, Alan Leighton, the national secretary of the referees’ union Prospect, has called on Chelsea to apologise and pay compensation.

“The charge was based on the flimsiest evidence that should never have got to this stage,” he said. “It should never have been made public and should have been dealt with confidentially. We are not criticising Chelsea because they investigated the complaint – they had a duty of care. Rather the evidence consisted of just one statement and that is why they shouldn’t have gone public.”

There is no denying that Clattenburg’s reputation has been damaged by this and it is likely that he will get stick from fans in the future. Arsene Wenger echoed similar thoughts to Leighton, claiming the situation should have been dealt with in house.

In an ideal world, it is safe to assume Chelsea would have preferred that too. After the John Terry case, the last thing they will have wanted is another issue related to racism. However, due to the confrontation after the game, in an office which is based very close to where the journalists were waiting post-match, Chelsea had no choice but to make it public. Before even releasing a statement, football fans on Twitter were discussing the rumour that Chelsea players had accused the referee of racism.

Can you imagine if Chelsea didn’t make the allegation public and didn’t release a statement, only for the back pages of the newspapers the following day to report on it? After receiving plenty of criticism for not taking the captaincy off Terry despite the FA finding him guilty of racial abuse, can you imagine what would be said of them if they tried to keep Mikel’s claims quiet? They would be accused yet again of not taking racism seriously.

Ramires should probably do the decent thing and apologise to Clattenburg though. Whether his complaint was malicious or not is irrelevant. Whether he intended to or not, Ramires has damaged Clattenburg’s reputation and accused him of something awful, so apologising shouldn’t be beyond him. However, if Chelsea are to pay damages to Clattenburg, it would suggest that they have done something wrong, when in reality, they had little choice but to act the way they did.