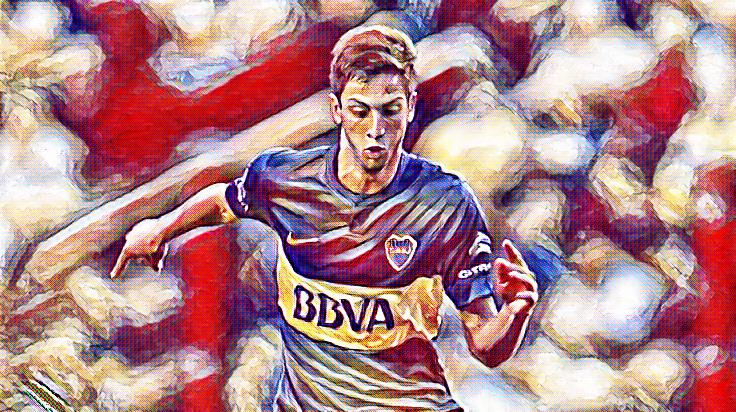 The question seemed normal as Rodrigo Bentancur took the pitch in the second half of an untypical summer Superclásico. Boca took the game in fashion, celebrating a 5-0 win against bitter rivals, with Bentancur signing the final blow. His first match had been days go, against Vélez in another friendly, and little was known of the 17 year old Uruguayan whose name was misspelt for months.

Arruabarrena, Boca’s blandest coach of the decade, had more wrongs than rights but deserves the credit of promoting Bentancur to the first team. His full debut was on April 9 against Wanderers in a Copa Libertadores match and a few days later for the Argentina Primera División against Nueva Chicago. Fast forward almost two exact years in time and the headlines will tell you that 19-year-old Rodrigo Bentancur has passed his medical at Juventus and is expected to join il Bianconero for the upcoming 17-18 season, in exchange for 9.4 million euros. But the question remains, just who is this guy?

One thing is for sure, he’s not the next Pogba. Journalism will tell you otherwise, in its dire need to set a concrete opinion on an unknown subject. Marketers, found everywhere in modern day football, will love the comparison. Breaking down this construct could take the attention away from Boca’s latest product, still, this is not a bad thing for Bentancur. Maybe, it’s exactly what his football needs.

By September 2015 Bentancur had a proper amount of starts in the first team, and Boca was leading the title challenge. His reputation was massive in Argentina and some mislead fans started asking him for the national team. In all fairness, the kid moved from Uruguay to Boca at age 13 and is an Argentinean citizen out of convenience. Then it happened. Boca played at la Bombonera against San Lorenzo. A true derby. San Lorenzo is the only top 5 team in Primera Division to have the advantage against Los Xeneizes and the title race could be defined right there. A boring 0-0 was about to settle the match’s result until Bentancur took the ball just outside his own box, tried a simple pass and gifted it to Matos, San Lorenzo’s clinical striker, who scored in injury time. He left the field in tears and the images went viral and replaced any snippet of his game, any well-placed pass. Bentancur was the word during that week, for all the wrong reasons.

“He’s just a kid” was Arruabarrena’s defence, as he pointed out what a correct match he had played, taking that particular action out of it. Boca went on to win the League and the Copa Argentina, thanks to the brilliance and unstoppable force that is Carlos Tévez, who came back to his first club from Juventus. In that deal, Boca gave the Italian powerhouse the first buying option of 4 youngsters, Bentancur included. Since then, the midfielder has been a fixed name in European transfer markets and Boca fans have been counting the days for him to go. Even Guillermo Barros Schelotto, Arrubarrena’s replacement, has expressed the difficulty of not knowing if he can count with one of his key players.

All of it just set the bar at unachievable heights for Bentancur. It can’t be easy being an under 20 Uruguayan midfielder, playing for Boca, with a potential 20 Million move to Real Madrid, Juventus or Manchester. You’re expected to win matches, control the game, give out assists, score goals, win things. None of that really happened. Bentancur, however, has been a fixed name on Boca’s starting eleven for the past year. At 19 years old, he’s played 59 official matches, won a league, a cup and the most recent under 20 Sudamericano with Uruguay. But his true potential hasn’t been discovered yet.

Originally a right midfielder he has played as a classic number five and as defensive midfielder on the left. He’s quick with the ball, firm with his passes, which almost always accelerate the pace of Boca’s attack. His mid-range passing is on point with both feet, as shown by his 82.1% passing accuracy this season, but his decision making can be poor at times. His long range shot is tremendous, though he’s not taking as many shots as he should (14 in 15 matches). Defensively he’s had 174 duels, winning 80 of them, 34 aerial duels with 18 wins and 36 interceptions. That’s a key aspect of his game. He’s tall, he’s fast when needed and is keen on winning the ball. Also, he’s pretty clean, only 2 yellow cards in 15 matches, as a product of 33 fouls. Physically he’s tall but lean, measuring a meter 89.

When you take all of these attributes into account you move away from the Pogba comparison and closer to another midfield dynamo from Juve, one that’s been as difficult to replace. Bentancur could be the next Arturo Vidal. Just give him a season or two at Bologna, Sampdoria or Genoa. Give him time. keep him away from the spotlight. He still makes naive decisions, you’ll hear, yet he’s only 19. His first match at Juventus will be far greater if he’s had 60 Serie A matches under his belt and around 150 total games played in hand. He needs to get used to Calcio, to European football, to higher defensive lines. He needs to get rid of every possible mistake before excelling at Turin. Bentancur could be a great player at 22, a key player at 24. At the cheap price of 10 million euros.