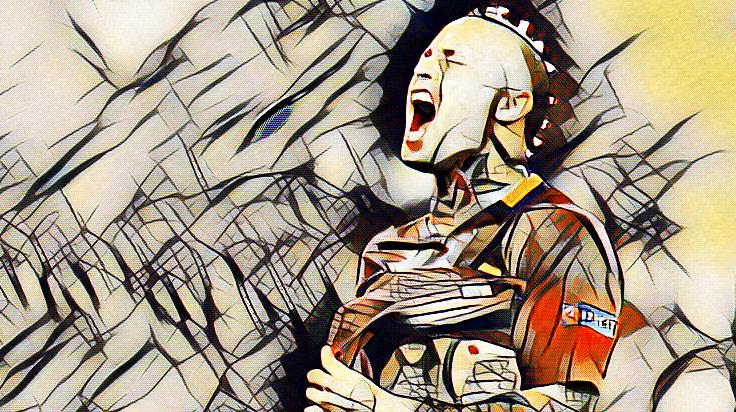 Roma and Belgium midfielder, Radja Nainggolan, is very good at three things, not including breaking my Microsoft Word just spelling his name. Firstly, he is a supremely talented player, gaining a reputation as one of the best all-round midfielders in world football. This reputation leads to his second talent, managing to be linked with Manchester United and Chelsea almost constantly for the past year. Unfortunately for fans of both clubs, and the Premier League in general, the midfielder has signed a new contract in the Italian capital until 2021. His third talent, which Nainggolan himself is very vocal about, is his capacity for a never-ending, burning hatred of Juventus.

Nainggolan made the move from Belgium to Italy at just 17, joining Serie B side Piacenza in 2005. In 2008, at 20 years-old, he was a pivotal player for the side as they battled relegation, playing all but four games in the season as they managed to stay in the second-tier.

In 2010, Nainggolan moved up the ladder to Cagliari (cal-ya-ree, not cag-lee-ah-ray for the love of God), where he moulded his all-round style of play we all know and love today. He stayed with the Rossoblu for just four years, but in that time, became a club legend. 103 appearances and seven goals later, it was time to move on again. When he left for Roma in 2014 for €6 million (a steal considering today’s ridiculous market), Nainggolan was named in Cagliari’s all-time best XI.

It was at Roma where his style of play really began to shine. By trade a central midfielder, he operated more defensively early on in his career, understandable as defending is a large part of the job when further down the league table. However, at Roma his contribution is equally offensive and defensive, with his pace and power being main strengths. If anything, Nainggolan has moved further forward as the seasons roll on. Last season, he played 26 out of 46 games in attacking midfield, scoring 14 goals in all competitions for the Italian side. But it’s not just physicality the Belgian has to his game, but superb technical and passing ability, registering seven assists last season also. He played a key part in Roma’s Scudetto challenge last season as they finished second, four points behind champions Juventus.

Funnily enough, it is because of Juventus that Nainggolan has captured the hearts of many Romans, and made a lifelong enemy of the Old Lady. In February this year, Nainggolan unleashed on the Serie A champions providing quotes which will last long after his playing career ends. I’ll let the man himself take it from here.

“It is better to win one trophy with Roma than it is to win 10 with Juventus.

“I would have given my balls to beat Juventus with Cagliari.”

A footballing rivalry it would seem to some, harmless banter maybe, but when Nainggolan says he hates Juventus, he’s serious.

“I’ve hated them since I was born. I’m not joking.

“I hate Juventus because they always win with a penalty, because of a free-kick. I came to Roma because I wanted to win against Juve, who have always had a helping hand.”

After Juventus’ 4-1 defeat against Real Madrid in the Champions League Final, as you would expect, Nainggolan was in a jubilant mood as he posted a video on Instagram.

“What a wonderful evening.

“I am in the training retreat with my national team, unfortunately, there are others already on vacation.

“Those who are on a retreat, those on vacation and those who had a day trip to Cardiff.

“I made this video to some that insulted me and talked beforehand – you don’t do that. You never talk before the event. Three days ago, you were bigging yourselves up, so what do you say now?”

The most personal example may that of Miralem Pjanic, who Nainggolan described as ‘like a brother’. However, after Pjanic joined Juventus, the bromance came to an abrupt end.

“I told Pjanic if he joined Juventus he could never speak to me again.”

Whilst it is bad news for the Premier League that Nainggolan has penned an extension with Roma, we will get to see Radja face up against Juventus at least twice more. Every cloud has a silver lining, in this case, a dyed-blonde mohawk.