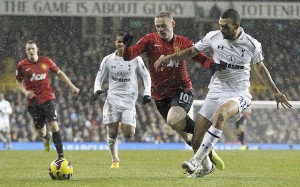 1. There are four games every season which a feel extremely uncomfortable watching for one reason or another, with those being our away ties against Spurs, City, Liverpool and Chelsea. It may be that I’m just very pessimistic but as I was walking into White Hart Lane yesterday, a little bit of me felt we were going to lose and if you would have offered me a 1-1 draw beforehand, I’d have probably taken it. Having said that, after playing so well it was bitterly disappointing to see us concede an equaliser in the dying seconds of the match like that. Two points dropped or one point gained? I’ll leave that for you to decide.

2. As of now, we’ve pretty much played all our most difficult away fixtures of the season bar Arsenal at the Emirates. Our record against the big sides has been magnificent this year with us snatching wins away at the Etihad, Stamford Bridge and Anfield. We’ve also taken a point now against Spurs, and at least we do not have another trip to Goodison Park to look forward to this season either. We have 15 games left this season, all of which we are capable of winning, so it’s only a matter of ticking away each match as they come.

3. Our form lately has seen us grind out results and so after going a goal ahead thanks to a fantastic cross from Cleverley and an equally great header from Robin, I genuinely thought we’d be able to see out the remainder of the game. Unfortunately however, we completely disappeared in the second half after starting off so brightly in the first. This seems to be a recurring theme of late with us also playing poorly in the second half against Liverpool and West Ham twice.

4. With Robin van Persie, nearly everything he is admired for is related to his sublime ability to finish a chance with minimal ease or to do something special in the final third of the pitch. Although he scored yesterday, I was far more impressed by his defensive work inside the United box, especially from set-pieces. Spurs whipped in a tremendous 36 crosses and yet only 7 of those crosses landed on one of their players. It’s great to see a player like Robin willing to track back and do the dirty work when the going gets tough as it shows just how important winning is to him.

5. As a big fan of Jonny Evans, I’ve always thought that this season would see him playing as our main centre-back with Rio and Vidic taking turns to accompany the youngster. With Nemanja back in this form however, I’m left scratching my head as to how he’s managed to seamlessly walk back into this United side and produce this kind of form alongside a refreshed Rio Ferdinand. Both players were wonderful yesterday and provided a great reminded as to how solid our defence can be, especially when it comes to dealing with aerial threats. Bring on Real Madrid!

6. Michael Carrick seems to improve with every passing game. Whenever I’m lucky enough to go to a United game I tend to keep my focus on these three players in particular: Dimitar Berbatov, Paul Scholes and Michael Carrick. Since Berba has moved to Fulham and Paul Scholes not even on the bench yesterday, it was up to Carrick to provide the type of magic I would pay good money for, and boy did he deliver. His reading of the game is sensational with him breaking up opposition attacks with minimal ease and keeping the ball moving with a simple pass to a United player even when placed under pressure. A class act.

7. Another recurring pattern which I’ve noticed this season is that Kagawa seems to be playing tremendously well for the first 55 minutes of our matches but completely disappearing afterwards. I fail to believe that this is due to his fitness as I recall reading he scored one of the highest tallies ever on his bleep-test during his United medical. What could be causing him to play so poorly in the second-half like this? I’m still not sure.

8. With David Dea Gea being David De Gea, I’m sure the media will love seeing him make a poor punch in the air and leading to us conceding an equaliser. What they will not mention however was that the boy managed to single-handedly keep us in the game at times with a pair of unbelievable saves with his feet. I’m hoping Sir Alex keeps his faith in the Spaniard and doesn’t start rotating his two ‘keepers all over again, although it probably will happen what with our next game being an FA Cup tie.

9. For a manager that apparently controls the British media and the FA, Sir Alex Ferguson’s side sure get a hell of a lot of decisions against them. Just to name a few, first there was that overturned Newcastle goal and now a pretty much clear penalty not awarded to us that could have ended the match at 2-0. We should ask for our bribes back from the referees after the poor jobs they’ve been doing this season. #Gilluminati my arse.

10. With five minutes left on the clock and Spurs throwing everything at us, I was left wondering why Sir Alex was not bringing Chris Smalling on. A tall, powerful defender would have been useful for us to defend against their crosses from but as the clock ticked down, the substitution never came. As we entered added time however, any substitution would have sufficed simple to wind that clock down but again, it didn’t come. A disappointing end but a relatively decent result, I’d say.

De Gea – Kept us in the game at times but will be unfortunately criticised for his weak punch in the dying seconds of the game. Developing an uncanny knack of saving the ball with any body part possible. 7

Rafael – Kept Bale quiet all game by getting tight when required and backing off when necessary. A very mature performance from the young Brazilian. Struggled to get involved with our attacks however. 7

Vidic – A rock at the heart of the United defence, it’s amazed me just how quick Nemanja has seamlessly fitted back into the side since his return from injury. A colossal. 8

Ferdinand – It pains to me imagine the gaping hole Rio will leave in our defence once when leaves. Incredible at times today, he looked like a possessed man doing everything in his power to drag his side to victory. Calm on his feet and untouchable in the air. 9

Evra – Given a run-around by Lennon today, it hasn’t been the first time Pat has struggled against this familiar opponent. Often caught out of possession defensively and wasteful up front. Disappointing. 5

Cleverley – Energetic and exciting in the first half, his passing was sharp and looked to set the momentum of our attacks. Quickly climbing up the assists ladder. His influence was short-lived though. 7

Carrick – Spent the game admiring his work rather than following the ball. It’s unbelievable to see how many of our attacks start off from his effortless interceptions and ball-retention passes at the back. Another magnificent performance from the Englishman. 8

Jones – Started off sloppily and carelessly at the back but eventually grew into the game. His aerial ability helped the team defend from set-pieces, as did his speed from closing down their wingers. 6

Kagawa – Started off really brightly but faded completely in the second half, as per usual. This isn’t the few time I’ve noticed this however and I’m still unsure why it seems to be a recurring theme with Kagawa. Strange. 6

Welbeck – Can’t fault his effort but there was real quality lacking at times. Took one too many touches occasionally and cornered himself unnecessarily. Still, he offers the team plenty in terms of movement and energy, hence why Sir Alex continuous to pick him. 6

Van Persie – Surprisingly quiet for large periods of the game, his influence was sorely missed. He took his only chance however and that’s all you can really ask from him. 7

Subs:
Valencia – Yet another depressing performance for the Ecuadorian, but at least he didn’t start. 4

Rooney – Other than his penalty appeal, he had nothing to offer whatsoever. He’d probably have taken the penalty himself and missed it anyway (Cue the hate mail in the comment section). 5