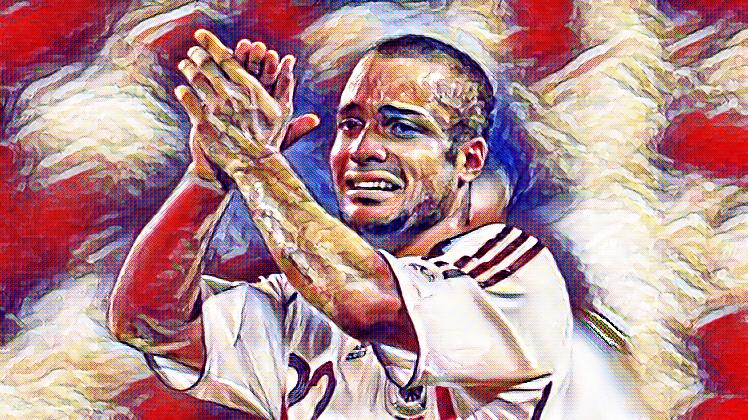 June 14, 2006. Dortmund. Jürgen Klinsmann’s Germany side is heading towards a disappointing draw against Poland in their second match at the World Cup. The 4th official raises his board, indicating three added minutes for the host nation to find a breakthrough. Just one minute later, David Odonkor latches on to Bernd Schneider’s pass ahead of three polish defenders and crosses first time for fellow substitute Oliver Neuville to slide home the winner at the near post. The impact of the late goal made David Odonkor an instant sensation throughout Germany and forever labelled him as a World Cup hero. Odonkor, a late call-up to Klinsmann’s squad, created one of the iconic moments of the 2006 World Cup.

A product of Dortmund’s youth academy, Matthias Sammer gave an 18-year old Odonkor his debut in Dortmund’s 2001-02 title winning season. Blessed with rapid speed, the winger gradually became a regular at Dortmund, appearing in 33 league matches in the 2005-06 campaign, leading to his debut for Germany.

After his heroics in the summer with Germany, Odonkor made a €6,500,000 move to Javier Irureta’s Real Betis side, signing a five-year contract. Bought to replace local hero Joaquín, hopes were high for the German winger. Just months into his time in Seville, Odonkor suffered a serious cartilage injury that sidelined him for almost six months.

Odonkor missed three more months the following season but was deemed fit enough to take his place in Jogi Löw’s Euro 2008 squad. Odonkor made one appearance in Germany’s run to the final. Just one week after the Final in Vienna, Odonkor suffered another knee injury, causing him to miss nearly seven months. The winger played just 114 minutes as Real Betis were relegated to the second division. Two more knee injuries meant he played just twelve more times for Betis, missing the entire 2010/11 season with injury.

In five seasons with the club, Odonkor featured in just 52 matches and made only 23 starts. Serious injuries in each season caused Odonkor to miss a total of 120 matches during his time in Spain. When fit, Odonkor struggled for form at an unstable club that went through seven managers in five years.

After a brief trial in Scotland with Ally McCoist’s Rangers, Odonkor returned to Germany following the expiration of his contract in the summer of 2011, signing with second division side Alemannia Aachen in September. Finally fit, Odonkor made 23 appearances for Aachen but could not prevent the club’s relegation. After relegation, Odonkor signed with Ukrainian Premier League side side Hoverla Uzhhorod. A regular in the first half of the campaign, Odonkor appeared 14 times (13 starts) for Hoverla but returned to Germany during the winter break citing homesickness and the living conditions in Ukraine as reasons for his premature departure.

Odonkor retired in September 2013 at the age of just 29 as a result of the series of knee injuries sustained throughout his career. Despite the injuries, Odonkor can look back on his career with pride having made 16 appearances for Germany as well as a Bundesliga title with Dortmund in his first season as a professional. Since retiring, Odonkor has coached in the German lower leagues and was most recently Sporting Director at Hammer SpVg in the 5th Division.

“Health comes first, I don’t want to pick up my daughter from school walking with a stick, limping.”

David Odonkor was an electric player who made fans excited whenever he got the ball. Although his time at the top was cruelly cut short by injuries, he will forever be remembered by German fans for his stellar displays in the World Cup. Listening to the commentary for his assist against Poland still gives me goose-bumps.