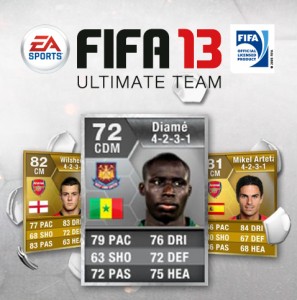 As the January transfer window prepares to slam shut at 11pm, a report released by EA SPORTS has revealed the ‘must haves’ and ‘must avoids’ for managers searching for a last minute bargain.

Using Official Barclays Premier League data, the findings reveal a number of intriguing statistical insights that prove there’s value to be had without breaking the bank. The report highlights:

• Newcastle should launch a shock swoop on deadly rivals Sunderland to replace Demba Ba – Mackems front man, Steven Fletcher, is the best performing striker outside of the traditional top six

The report was collated in conjunction with EA SPORTS FIFA 13 Ultimate Team, which allows players to build, manage, and play as their own Ultimate Team. Using a live in-game auction house you play the role of team manager spending big like Mancini, conservative and calculated like Wenger or swooping for a last minute bargain like the shrewd Harry Redknapp. Making astute trades and landing the right players means you can build a team that every premier league manager will be dreaming of come the end of transfer deadline day.

While the big names and the big clubs will always demand high transfer fees, it’s the players outside the traditional ‘Big 6’ of Manchester United, Manchester City, Chelsea, Arsenal, Tottenham and Liverpool that stand out as the real life ‘Hidden Gems’.

Steven Fletcher has proved a fantastic signing for Sunderland, hitting ten goals with an incredibly efficient 3.8 shots per goal to make him the pick of players outside of the ‘big 6’. In fact, if Fletcher could be tempted to move to St James Park, Alan Pardew would gain a striker more deadly in front of goal than Demba Ba. Ba has 14 goals this season but has needed 88 shots to get there, averaging 6.3 shots per goal. Using each player’s average chance conversion, Fletcher would be the Premier League’s top scorer with 23 goals if he’d had the same number of chances as Ba this season.

Chelsea are rumoured to be eyeing up a £15 million move for Brazil’s Paulinho but the data proves they might be better off securing a more familiar face. Frank Lampard has averaged a goal every 116 minutes 53 seconds this season, the best minutes per goal ratio of any midfielder in the Premier League. Needing an average of only 3.5 shots for every goal, his conversion rate is better than even Robin van Persie’s and surely good enough to warrant a new contract.

Finding a balance in midfield is a practiced art and, while Arsene Wenger’s Arsenal has never been short of quality on the ball, every midfield needs that bit of graft. Rumoured target West Ham’s Mohamed Diame trumps all Arsenal’s current midfield in the tackling stakes. Diame wins 60% of his tackles compared to Wilshere’s 44% and Arteta’s 40%. Add a minutes per interception rating that shows Diame making an interception every 62 minutes 48 seconds compared to Arteta’s 83 minutes 24 seconds and Wilshere’s 96 minutes 22 seconds and it becomes evident that Diame could add that bit of bite to Arsenal’s gracious midfield.

Joe Allen, Fabio Borini and Daniel Sturridge have all worked with Brendan Rodgers previously before moving to Liverpool and, as the Northern Irishman aims to stamp his own philosophy on the club, Rodgers is now being linked with another former player in Swansea Captain, Ashley Williams. Williams has made 243 defensive contributions (measured by tackles won, interceptions, clearances and blocks) this season – second only to Everton’s Phil Jagielka – which suggests, for a rumoured £8 million, Rodgers could get a bargain if he bags the Swans stopper.

Peter Odemwingie issued a ‘come and get me’ plea over Twitter at the weekend and it looks like QPR and West Brom are set for protracted negotiations as the deadline looms. Odemwingie has had limited opportunities this season, but has still managed to notch up five Premier League goals at a rate of 7.2 shots per goal. Compare that to the man he would be replacing at QPR, Djibril Cisse, and Harry Redknapp would be gaining a striker twice as deadly. Cisse laboured to 13 shots per goal for his tally of 3 Premier League goals. Jamie Mackie’s strike rate isn’t much better, averaging 11 shots per goal. In fact, only the injury-plagued Bobby Zamora has a chance conversion rate of less than 10 shots per goal at QPR.

Although the majority of transfer window activity is expected to happen over the remaining hours, there was some early movement in January with both Liverpool and Chelsea seeking to boost their firepower. But have they made the right moves?

With 3 goals for Chelsea already since moving, Demba Ba already looks like one of the bargains of the season at a reported £7.5 million. Ba’s introduction sees him fight for a starting berth with the misfiring Fernando Torres but the data shows there is very little cause for comparison. On current form, Chelsea striker Fernando Torres is averaging a goal every 276 minutes which is over twice as long for each strike as Ba who averages 127 mins per goal. Torres is actually more accurate in front of goal than Ba, getting 72% of shots on target compared to Ba’s 56% but the short of confidence Torres has only had 43 efforts at goal this season, compared to Ba’s 88.

The arrival of Ba at Chelsea allowed Daniel Sturridge to move to Liverpool. The Reds already had the Premier League’s second top goal scorer in Luis Suarez but, with the Uruguayan scoring 16 and assisting in 5 of Liverpool’s 40 goals this season, they looked over reliant on their number 7. However, the data shows that signing Sturridge could be a masterstroke that leaves Brendan Rodgers with the deadliest duo in the business. The bad news for Liverpool’s Premier League rivals is that Sturridge is even more lethal in front of goal than Suarez. Over the last two seasons Sturridge has scored 14 goals from 106 shots, with a conversion rate of 7.57 shots per goal compared to Suarez’s 8.67 shots per goal.

But for the many managers on a more modest budget and still looking to do business, EA SPORTS FIFA 13 Ultimate Team (FUT) has put together two special Transfer Window XI’s that could help them scoop a hidden gem.

Our first XI avoids the high transfer fees and reluctance of rival managers to do business together by looking at the top ranking players outside of the traditional ‘Top 6’ clubs – Manchester United, Manchester City, Liverpool, Chelsea, Arsenal and Spurs. The season has seen some standout performance outside of these teams and with teams such as Everton and Swansea performing above expectations out First XI shows where managers could be looking further down the table.

Our second XI looks at those players who may be tempted by a move for more regular football. Every player in our second XI has played less than half their team’s minutes on the pitch this season (for reasons other than long term injury) but boasts a ‘per minute on the pitch’ rating that rivals the Premier League’s biggest stars.