San Mames, Bilbao – On a cold and wet Basque evening, Real Madrid failed to score for a second consecutive La Liga away match. Zinedine Zidane fielded the same starting eleven as the one that started the Champions League final in Cardiff against Juventus – on that occasion Madrid got four goals, on Saturday they got none. “I’m not worried, I’m disappointed for the players,” Zidane admitted when asked whether he was concerned about the lack of goals after the match. “We worked well, but the ball didn’t want to go in. Playing in this fashion the goals are going to come.” The goalless draw at San Mames meant that Los Blancos couldn’t cut the gap between themselves and league leaders Barcelona.

It was a frustrating night for Real Madrid – chances were created but not finished. The burden on Ronaldo and Benzema’s shoulders gets ever greater. Ramos received his customary red card – a yellow in the first fifteen minutes and a second late in the match for an elbow to the face of Aritz Aduriz – that means he will be absent for the match against Sevilla; a match that many see as a must win.

Athletic have had problems of their own this season – Cuco Ziganda’s side have won only three La Liga matches, their last being against Sevilla in mid-October. It was never going to be easy for Ziganda, trying to fill the void that Ernesto Valverde left both in terms of tactical and managerial intelligence and being an ambassador for the club and region.

Athletic pride themselves on being a club like no other – their identity is paramount – they manage to combine indigenous sustainability with ambition. Their policy is strict but clear; if you’re not from the Basque Country, or have heritage based therein, you won’t play for us. Some say this holds Athletic back from being a bigger name in Spanish and European football – whilst this is a constraint, it is also a force that increases the togetherness of the club and community. It requires people to do their jobs and do them properly – there’s no money involved to mask the true picture.

The coaches and players based in the local leagues feed Athletic – if they don’t deliver, the first-team suffers. Yet this is a club that has housed many a talent, Antonio Zubizarreta, Ander Herrera, Javi Martinez, and Aitor Karanka to name a couple. Current players Inaki Williams, Iker Muniain, and Kepa are all impressing whilst Aritz Aduriz – a legend in the eyes of many of Los Leones fans – will be allowed to play for the club for as long as he wishes.

Regular participation in European competitions and usually reaching the latter stages of the Copa del Rey is a credit to the way things are done at Athletic. The new San Mames stadium was opened in 2013 – albeit only over the road from their old stadium, it was a sign of the clubs progression and growth – and I can vouch that it is an impressive modern structure. During construction, in a typically symbolic display, a piece of turf and a brick were removed from the old stadium and carried to the adjacent construction site by a human chain including famous players as well as members of the youth system, the women’s team, the reserve team, and its oldest and youngest registered supporters.

And it was in this new Catedral that Real Madrid battled with Athletic to cut the gap at the top of the table. The first chance of the match fell to Benzema in the 10th minute – Ronaldo burst forward from deep to play in Isco whose whipped cross was chested down and rattled against the post by Benzema. Despite Real’s early attacking flurry, Athletic did have chances of their own – Benzema causing problems in his own defence by sloppily playing a ball across the Madrid penalty area to the feet of the grateful Mikel Rico who failed to make space for the shot.

Inaki Williams – a player who has impressed for awhile but never completely fulfilled his potential – had Athletic’s best chance of the first-half, receiving the ball on the end of a neat one-two from Raul Garcia and striking low across Keylor Navas, only to be denied by a fingertip save from the goalkeeper who was starting his match since the beginning of October.

Aduriz had a clear sight of goal for Athletic at the start of the second-half – Navas again did well to deny the powerful strike from the evergreen striker. The rain turned heavier and the tackles got heftier. The Basques were standing strong and the crowd loved it. Both of Real’s strikers had another evening to forget although Ronaldo did come desperately close to winning it for Real – the ball dropped over his shoulder but he fired his volley against the base of the post. Ramos’s red card increased the sense of frustration amongst the travelling Madridistas who face tough tests in the coming weeks against Sevilla and Barcelona either side of their trip to Abu Dhabi for the Club World Cup. The battle had been hard fought and the Basque crowd, as ever, appreciated the effort. A banner had been unfurled prior to kick-off in the North end of San Mames, ‘The victory is ours’ it read – in Bilbao more so than anywhere else that is certainly the case.

Girona – Alaves to be played on Monday 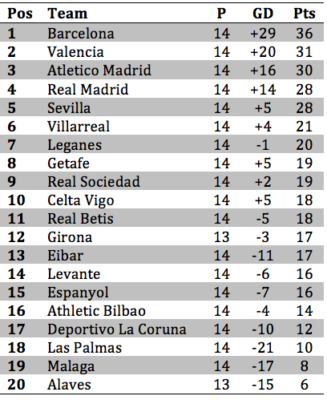