El Metropolitano, Madrid – The first ever Madrid derby at El Metropolitano finished goalless; the result left both of the competitors ten points behind La Liga leaders Barcelona and the match itself helped illustrate why. Diego Simeone said post-match that “there was football all over the place,” and for the opening five minutes that was the case with the best chance of the match coming in the third minute. Raphael Varane nudged the ball into the path of Atletico’s Angel Correa only for his shot to go wide of the post despite being under no pressure. Perhaps from that moment on ‘the football was all over the place’ may be a more apt summation.

In a game that usually delivers goals, chances were few and far between and with Karim Benzema and Ronaldo subdued, it was Toni Kroos who had Real’s first opportunity. The German playmaker played a neat one-two with Ronaldo before lifting a delicate shot fractionally wide of the post under pressure from Diego Godin. Moments later Sergio Ramos received a hefty whack to the face from Lucas Hernandez’s boot as he headed an effort wide of the post from close range. The Real Madrid captain was forced to shove cotton wool up his nose to prevent the blood from pouring yet his broken nose meant he made way for Nacho at half-time.

Real found a way around the Atletico press; Isco, Benzema, and Marcelo made progress on the left – the immense majority of the attacks coming on their side – but the action in the final third lacked tempo along with imagination. Ronaldo – who seems to be struggling to find his role in the team at the moment – scuffed a volley well over the bar before forcing Jan Oblak into a save from a long-range free-kick which turned out to be the only shot on target in the first-half.

The match seemed to regress further in the second-half. Isco tried to get Real going but found it difficult on his own. Attacking substitutions were made but made little impact. There was limited imagination, virtually no tempo, and – for a game in which a draw was far from perfect for either side – little will-to-win. Gameiro – one of the newcomers – clipped a shot over Casilla but Varane headed off the line. The first chance on goal in the second-half.

Juanfran – who had surprisingly outpaced Ronaldo in the first-half – was incredibly fortunate to not be sent off after he hauled back Marcelo just moments after being cautioned for upending Isco. Some might say Senor Borbalan, the referee, matched the players in being under-par. Late confusion in the Atletico penalty area created nerves in this new arena – Kroos’ shot was beaten away by Oblak and, with Ronaldo lurking, Godin cleared.

The tension was not quite over. Ronaldo looked destined to seal the win for Real in the final moments but his close-range shot was fantastically blocked away from goal by Lucas Hernandez. A moment that summed up the match – defenders getting the better of their attacking counterparts.

Zidane remained resilient about Real Madrid’s position after the match, “It’s not insurmountable – I’m sure Barca are going to drop points, we have to continue doing our work and that’s all. Our game has been good today, we just couldn’t get a goal.” Real must find their feet soon if they are to reduce the gap to the top of the table. A gap of ten points when Real meet Barcelona in the Classico just before Christmas, you expect, would be too much.

Griezmann followed Ronaldo by continuing his poor run of form and goalscoring; offering very little on the night. “Griezmann is still one of the family and I defend my family to the death,” Simeone told reporters but there were initial signs that fans of Los Colchoneros were turning on Griezmann as they booed him off when he was substituted.

The first derby at El Metropolitano was far from memorable – there were few chances for the crowd to get excited by, little quality to entertain – but certainly symbolic of where these two sides currently find themselves.

Eibar – Real Betis to be played on Monday 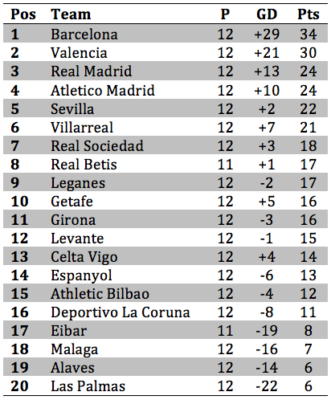