Mestalla, Valencia – ‘The view is good from here,’ said the Valencia manager. ‘You see things that you wouldn’t normally.’ Sitting not far from the reporters who were either commentating, commenting, or providing analysis on his side, nor far from the owner of the club of whose ambitions he must fulfil; Marcelino found himself halfway up the main stand due to the touchline ban he received last week. He looked down on his players and he enjoyed what he saw.

The Mestalla hadn’t seen a night like this for some time. The league leaders were in town and it was the hosts who were their closest challenges. What Marcelino’s side have achieved thus far this season – an eight-match winning won and the best start to a season for many years– must be appreciated, however, the match-up on Sunday evening certainly was their biggest and most crucial test of the season so far.

Valencia resorted back to the Valencian-style of old – at least for the first-half – a more defensive approach and counter-attacking when the opportunities arose. They paid Barcelona a lot of respect. This type of Valencia performance – a kind of Atletico Madrid II – has not been seen much around the Mestalla this season; Marcelino has encouraged his team to play attacking football by being aggressive. Thus in the first-half Barcelona dominated the possession – constantly jabbing and poking Garay and Gabriel in the Valencia defence. However, the Blaugrana were limited to shots from outside the penalty area, never seriously troubling Neto in goal.

The first major goalscoring opportunity – or should that be goal – came on the half-hour mark; a Leo Messi shot squirmed through the gloves of Neto and over the line before the goalkeeper scooped the ball out. The referee – who was outside the penalty area – waved play on, the linesman was not on the goal-line so couldn’t see it. This scenario could have been avoided with goal-line technology, but La Liga have shown themselves to be archaic with this matter. With the Barcelona players up in arms, Valencia went and countered and almost added insult to injury by scoring one of their own. Zaza’s shot went just wide of ter Stegan’s post.

Valencia came out for the second-half in a very different mood. They resembled the Valencia that we have come to love over recent weeks. They took the second-half to Barcelona with a more attack-minded approach. Quick passes and one-twos cut through the Barcelona defence. Zaza had an early opportunity but dragged his shot wide. Valencia were on top. Marcelino, and the fans he sat amongst, liked what they were seeing. On the hour mark, it came. Jose Gaya broke free of Nelson Samedo down the left and his fierce cutback was tapped in by Rodrigo after Thomas Vermaelen – on his first La Liga start in 22 months – had switched off. An orange wig was grabbed from the crowd and placed on Rodrigo’s head – a random celebration in the heat of the moment, no, a tribute to the late former Valencia president Jaime Orti Ruiz who wore the same thing after beating Zaragoza in Rafa Benitez’s first title-winning season.

Valencia were in the ascendancy, and holes began to appear in the Barcelona defence as they went in search of an equaliser. Goncalo Guedes was a shining light on the left side for Los Che – combining well with Gaya on the overlap. Deulofeu, Denis Suarez, and Vidal all came on and added pace and energy for Barcelona. The match was open. The contest all had wanted. In the 82nd minute Messi collected the ball in a deep position before showing superb vision to spot the run of Alba around the back of Martin Montoya, and then the full-back finished with aplomb firing an unerring volley past Neto from an acute angle. It was an equaliser few could argue with.

A last minute chance fell for Zaza but the in-form striker couldn’t send Los Che to victory. The draw means both Valencia and Barcelona preserve their unbeaten record in La Liga this season. The first ‘big night’ at Mestalla for awhile had pleased many and showed why Valencia should be considered Barcelona’s title contenders this season.

Espanyol – Getafe to be played on Monday 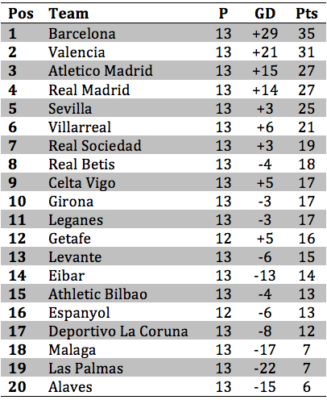