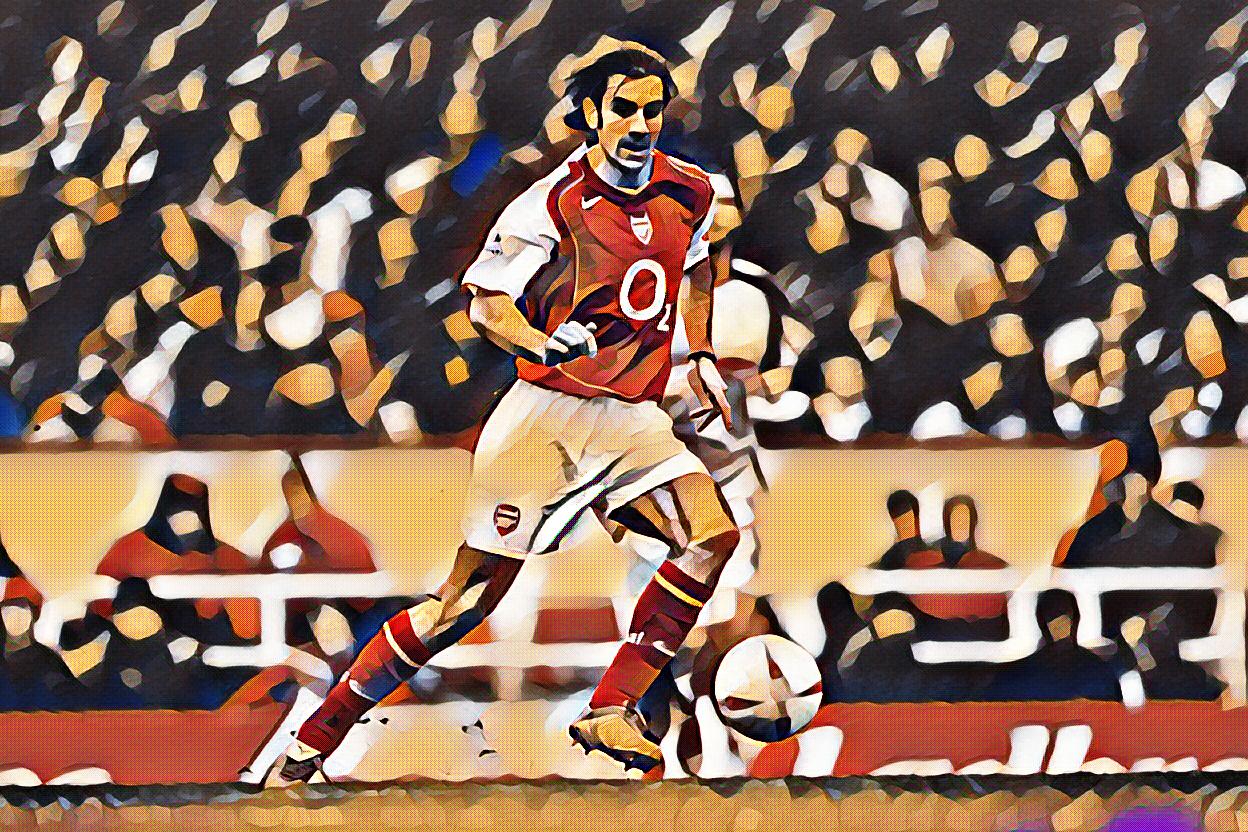 Goatee, gloves, shoulder-length hair. Robert Pires was simply an iconic figure within a team that was a cut above the rest. Playing on the left-wing of the Invincibles Arsenal side, Pires was a joy to watch, teaming up with Henry, Bergkamp, Vieira et al. to create a special side that every fan respected whatever their allegiance, even Manchester United supporters.

Pires contributed 14 goals during the Gunners’ 2003-04 campaign as Arsene Wenger’s side racked up a highly impressive 90 points over the course of an unbeaten title-winning season that will go down in footballing folklore. Pires was an ever-present figure in this success, usually playing in a midfield quartet alongside Ljungberg, Vieira and Gilberto Silva.

Only Jens Lehmann and Kolo Toure started more league appearances than Pires during the Invincibles season, a real testament to how consistently good the Frenchman was throughout the memorable campaign. Indeed, as a side, Arsenal won 26 games and drew 14 as they finished 11 points clear of second-placed Chelsea with a vastly superior goal difference of plus 47.

Indeed, Wenger referred to Pires as the ‘‘oil in the engine’’ of the team.

The class of Pires’ game was highlighted during the 2002-03 season with a sumptuous first-time chip over Southampton keeper Paul Jones to complete the Frenchman’s hat trick during a 6-1 romp. The winger did not break his stride as he ran onto the ball and made the seemingly difficult appear so ridiculously easy.

This win over Southampton was a dress-rehearsal, albeit a very one-sided one, for the 2003 FA Cup final at The Millennium stadium between the two sides just over a week later. Again, it was Pires who was on target, scoring the only goal of the game to retain the trophy for The Gunners. Having missed the previous year’s final with injury, where Arsenal beat Chelsea, Pires more than made up for that particular disappointment, by firing past Antti Niemi after 38 minutes.

With the ability to move more infield and play as an attacking central midfielder, Pires was predominantly used as a traditional winger with the skills and vision to make him a real handful for most full-backs.

In full-flow, Pires almost seemed to glide across the pitch with an apparent ease to leave defenders in his trail, before linking up with the likes of Henry and Bergkamp around the penalty area-always danger signs for any opposition.

Having been signed from Marseille for £5 million in 2000, Pires was seen as a suitable replacement for Marc Overmars, and over the course of his six years at Highbury, Pires cemented his place within the hearts of Arsenal fans, winning two Premier League titles and three FA Cups. Wenger will have been delighted he managed to fight off stiff competition from Real Madrid to bring the creative playmaker to North London.

Often, the Frenchman had the capability of producing special goals. Similar to his chip over Paul Jones, Pires produced another artistic goal at Villa Park during a 2-0 win in March 2002. He lobbed Peter Schmeichel from inside the area with a nonchalant side-footed finish, making one of the greatest Premier League goalkeepers of all time look silly. Commentating on the game, Martin Tyler described the effort as an ”outstanding goal from a magnificent player.”

Yes, there were also the not so glamorous moments at times. After all, even the best make mistakes. Diving was something that was sometimes associated with the winger. He was substituted after just 18 minutes during the 2006 Champions League final defeat to Barcelona, following Jens Lehmann’s red-card. And then there was that infamous penalty against Manchester City in 2005, where Pires attempted to roll the ball to Henry from the spot, only to scuff the ball in a complete balls-up, which was quite frankly ridiculous.

Fortunately that mistake was not costly, as Arsenal still picked up the three points, but nonetheless, it was a case of trying to be too clever when the score line was only 1-0 at the time.

Despite the occasional blemishes, Pires will be remembered with fondness as an Arsenal legend. Named in three PFA teams of the year, as well as collecting the Football Writers’ Award in 2002, Pires played the game with so much style that made him captivating to watch.