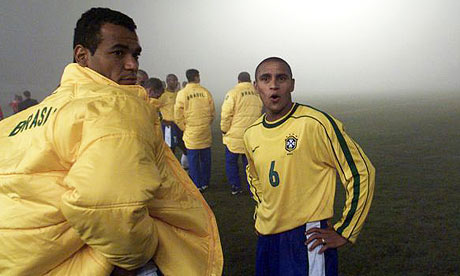 Roberto Carlos was born in the city of Garça, São Paulo, in 1973. He had a poor childhood and used to spend his time between helping his parents in farm jobs, and playing with his friends after all his work duties were over. In 1981, Roberto Carlos moved with his family to Cordeirópolis.

In 1991, he joined União São João, a football club based in Araras (São Paulo state). In 1992, despite playing at what was seen as a lesser club and only being 19-years-old, he was called up for the Brazil national football team.

When he was 20-years-old he joined Palmeiras and in his two years there won two consecutive Brazilian League titles, two Campeonato Paulistas and the Torneio Rio-São Paulo. With more than 30 appearances for the national team under his belt, Carlos made the move to Europe, signing for Roy Hodgson’s Inter Milan. At the end of the season, having scored 7 goals in 34 games, the Brazilian fell out with the manager over what he believed his best position was.

“My problem at Inter was Roy Hodgson,” he said. “He wanted me to play as a forward when I’m a defender – I prefer to have space ahead of me to run into rather than be a winger already up there; for me it’s better to have 80 metres to play in than 20. I didn’t like the system or where Hodgson wanted me to play in it. He wanted me further up the pitch, sure, but stopped, still, rigid. The Copa America was coming up and I was playing at left-back for Brazil, so I wanted to play there for Inter too. I had to leave because I didn’t want to jeopardise my chances with the national team. If I couldn’t play the way I do I wouldn’t be able to play for Brazil. I spoke to Massimo Morratti [the Inter president] to see if he could sort things out and it soon became clear that the only solution was to leave.”

Hodgson’s loss was Real Madrid’s gain and Carlos joined the team of “Galacticos”, where he would go on to spend the next eleven years of his career, winning four league titles, three European Cups, three Supacopas, two Intercontinental Cups and one UEFA Super Cup.

“The whole Galacticos thing is an invention from the press,” he said in 2005. “The Galacticos tag really annoys the players. Above any Galactico there is a club, a history, a badge. We shouldn’t get things mixed up or confuse the issue: if there are players who get known as Galacticos it’s because we have won lots of trophies, World Cups, important finals, European Cups, not because we control things. We don’t have any power beyond the norm. The person who carries the most weight and responsibility is our captain, Raul, and things like training and meals are down to the coach and the captain to decide together. And, no, there aren’t any untouchables.”

The following year he set a club record for the most league matches played by a non-Spanish born player when making his 330th appearance for Madrid. He broke the previous mark of 329 held by Alfredo di Stéfano. Carlos said if he could pick any player in the world, past or present, to play on the left wing ahead of him, it would be di Stéfano.

It obviously wasn’t just his club career that put Carlos on the list of footballing legends but his performances for his country too. His most famous goal came against France in 1997 when he seemed to defy the laws of science to make the ball curve at a ridiculous angle around the wall before finding the back of the net. French physicists later conducted a study to explain the goal, which is something more than Carlos could do.

“How did I do it? I don’t know,” he said. “I hit the ball and, well… there are free-kicks like the ones you see Beckham hit that move and fool the goalkeeper, but mine was different because the ball went outside-in rather than the other way round. There’s no explanation, no explanation… the ball was too light, one of those ones that floats all over the place like a kid’s ball, and I hit it really hard – really, really well – with the outside of my foot, but I don’t know… it surprised me when it went in: I thought it was going wide and when it swung so far back and went in off the post I couldn’t believe it. It was an impossible goal – you’ll never seen one like that again. Remember it, because it won’t happen again!” It wasn’t the only ridiculous goal of his career though, as YouTube can testify.

Carlos won the World Cup with Brazil in 2002 under the guidance of Luis Felipe Scolari after losing in the final to France in 1998. Brazil won all of their group stage games, seeing off Turkey, China and Costa Rica. Carlos scored their opening goal against China in their 4-0 win with a typically fantastic freekick. They beat Belgium 2-0 in the next round before that painful 2-1 win over England in the quarter-finals, as Ronaldinho caught David Seaman off his line from over 40 yards out. A narrow 1-0 win over Turkey in the semi-finals booked their place in the final against Germany, where Ronaldo scored his 7th and 8th goals of the tournament in a 2-0 win. Carlos was named in the Team of the Tournament alongside team mates Rivaldo, Ronaldinho and Ronaldo.

“All Scolari did was bring the team together, tell us we were going to be champions, and get rid of some players that the press and the fans wanted,” Carlos said, when explaining the impact of Scolari in comparison to Vanderlei Luxemburgo, who almost cost them qualification to the tournament. “He brought together five or six important players – like me, Cafu, Juniour, Rivaldo, and Emerson – explained to us what he was going to do and got on with it. There were off-field problems more than footballing problems for Luxemburgo and, by extension, for us. So it was more a psychological and environmental change than anything else. Scolari said he would sort out some of the troubles off the pitch but it was up to us to get things right on the pitch.”

In 2006, Carlos retired from International football following a 1-0 defeat to France in the quarter-finals of the World Cup. He was heavily criticised for failing to pick up Thierry Henry for the goal. “I’ve stopped with the national team,” he said. “It was my last game.”

The following year, having scored an incredible 66 goals for Real Madrid, he left Spain for Turkey, signing for Fenerbahçe. He spent two and a half seasons there and won Turkish Super Cups, scoring ten goals. In his last game, he came on as an 89th minute substitute, greeted by chants of “I love you Carlos” from the fans.

“I would be willing to play for Madrid for six months from January to June, for free,” he said. “I would like this. In Madrid I spent many wonderful years, I’ve won everything and I consider it my home.”

Instead, he returned to Brazil and signed for Corinthians to play alongside Ronaldo once again. After playing 60 games in Brazil he requested a transfer request and receiving death threats from fans after the Copa Libertadores da América defeat to Tolima.

In February 2011 he joined Russian side Anzhi Makhachkala in a deal worth €10 million and was made captain. In his first season he scored 5 goals in 32 games and took on the role of caretaker coach following the sacking of Gadzhi Gadzhiyev. He announced his plans to retire at the end of the season and was removed from the Russian Premier League registration list for Anzhi in March 2012.

This week, his retirement from football was made official, with Anzhi manager Guus Hiddink announcing the news.

“Roberto had been a world class player, but unfortunately he doesn’t play any more,” said Hiddink. “Fortunately, Roberto will now take up a role to develop this club for the good of the game in the Dagestan region and the whole of Russia.”

Carlos is now planning a testimonial match between Anzhi and Real Madrid.