Skip to content
Posted in Abroad By By Far The Greatest TeamPosted on December 11, 2012July 11, 2017Tagged Roma, Serie A 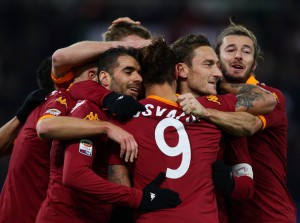 There are certain coaches that advocate a certain style of play, when Roma made former manager Zdenek Zeman the man in charge they knew what they were signing up for. The Czech is famed for what can only be described as the “all out attack” setting on FIFA, Zeman’s tactics is one of high intensity, flair and endless pressure being applied on the opposition. This season Roma after sixteen games in the season have been involved in 64 goals, scored/conceded. They are the highest scoring team in the league and share the second worst defence. That perhaps isn’t a fair reflection on the defenders’ individual talents in the team but it is the result of Zeman’s style, Zemanlandia has taken Serie A by storm once again.

In years gone by, many neutrals have talked about the Spanish giants of Real Madrid and Barcelona being the most entertaining, the star studded rebirth of the ‘galacticos’ and the tiki taka approach instilled within La Masia are no doubt captivating, but this season, Roma have perhaps surpassed all in Europe’s major leagues. Serie A has received many critics over the years for their perceived style of play and match fixing scandals but Roma have shined this season for all the right reasons. Their on-field performances. Catenaccio, once at the forefront of Italian football, is well and truly dead, at least in the capital. Just take a look at what the manager had to say when asked about the defence… “It’s normal that every now again you risk something but when you score 90 goals it’s not important to see how many you let in.”

It isn’t simply due to their almost complete focus on attacking play that makes Roma so exciting to watch but the talent that executes it. There is a brilliant blend of hard graft and gifted technical play in this Roma side, their hard work and relentless pressing when the opposition have the ball make it difficult to settle into a rhythm against them and no one typifies that attitude quite like Michael Bradley did against Fiorentina, who for ninety minutes hassled the opposition and then surged forward to help in the attacking phase. Yet, it isn’t just the efforts of certain individuals but a collective team effort to pursue the regaining of possession. Ironic that the coach that demands so much from them on a weekly basis is then never far away from a cigarette.

When in possession of the ball the movement from the players is a joy to watch, always looking to find space and make themselves available for their team mates, everyone has a certain comfort on the ball. Equally impressive is the fact they like to use every inch of the pitch available to them as their full backs bomb forward to try and open up gaps in the middle of the pitch. The signing of Balzaretti in the summer has proved to be vital as he is always willing to provide an overlap down the left hand side of the pitch and serves as an outlet for any player who has the ball.

Most refreshing of all is that the team never look to close out a game by defending a lead, they aim to put the game beyond any doubt by adding to their lead. Time wasting is not even a thought in their approach. It may not be the most effective of plans as it has seen Roma relinquish leads late on in games but it ensures there is never a dull moment with the side. From the moment they kick off you can tell there is something special about this Roma side. Just look at how they line up when they kick off! 0-2-8 is something we all dreamt of a team doing since the Joga Bonito adverts but Roma make that a reality. Of course, they don’t play a whole game with that system but it is pleasing to see nonetheless.

The side is, as it has been for the better part of two decades, fueled by the brilliance and magic of one Francesco Totti. I promise not to go into an in-depth love in for the Golden Boy of Roma, you can find that here  but Totti has been the most used player under Zeman and at the age of 36 that alone deserves plenty of praise. He happens to be, unsurprisingly the only player who was involved in Zeman’s previous stint in charge and he has already contributed 6 goals and 5 assists this season and played vital roles in more than one of the big Serie A fixtures. Ever the reliable performer, Totti has seen most of his time this season being deployed as a support striker starting from the left, his performances (like a fine wine) only seem to get better with age.

Arguably the best player this season for the Giallorossi has been Erik Lamela, in 11 appearances the Argentinian has scored 8 goals and picked up 4 Man of the Match awards. His impressive dribbling and technical ability has flourished under Zeman and the player looks to be living up to the potential that Roma saw in him whilst at River Plate. Playing a similar role to that of Totti but on the opposite side, Lamela has caused the opposition defence a whole host of problems as defenders are unsure whether he will beat them on the outside or cut in and unleash a fearsome strike with his left foot. With only one assist to his name it may be perceived that Lamela hasn’t contributed enough in that department but his eye for a pass is second to very few in world football.

Lamela isn’t the only second year Giallorossi to have taken to Zeman’s style like a duck to water. Miraljem Pjanic has excelled all over the midfield from Regista to Trequartista, his performances have been of the highest order and is another player with supreme technical ability, he has managed to outshine Daniele De Rossi when partnered alongside him and who along with Lamela and Totti, combine for over 8 key passes a game. Teams are grateful for one player with that string to his bow. Roma possess multiple players capable of breaking a team’s defence down. The beneficiaries? Well, that part is easy. The strikers. Daniel Osvaldo and Mattia Destro have both enjoyed call ups to the national squad following their performances in recent times and the pair have combined for 12 goals in 14 games with the former accounting for 8 of them and they wouldn’t be the most entertaining side in Europe if the goals weren’t slightly special.

It isn’t always a happy ending for Roma and it is for this reason that makes their games so enthralling. There really is no way in determining which Roma might turn up and whether there will be a moment of brilliance or madness. For all the good that comes from Zeman’s mind there are times of self destruction and to use their most recent fixture again, that against Fiorentina as an example again… The Roma defence whilst defending a free kick, inexplicably rushed out to try to trap Fiorentina offside but made the grave error of, well, keeping them on. What ensued was possibly the easiest goal scored this season as the cross found 3 Viola players unmarked on the 6 yard box ready to tap the ball into the net uncontested. Their capitulation against Udinese wasn’t a pretty sight either but for the neutral (as I remain for now) it makes for a wonderful spectacle.

I feel it important to add quickly that it isn’t just Roma in Serie A that have played football for all purists to enjoy. The league has been revitalised and is home to some of the best players in the world and some of the brightest talents. As a final note, if you haven’t watched Roma play this season, what are you waiting for? Those that have, I won’t need to be telling you not to miss out.