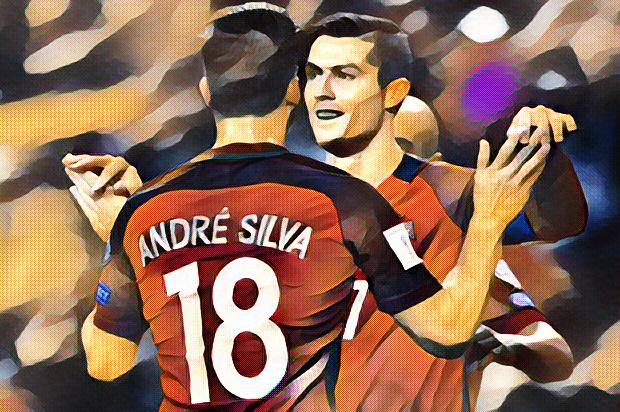 The European champions had a very important match to get rid of any possible ghosts of past failed qualifications with a very solid win against a Hungary that was not able to replicate the troubles they had protagonized last June. With a specially in-form Cristiano Ronaldo soon the offensive avalanche that the Seleccao das Quinas was able to create resulted in goals, with the, arguably, best player ever to wear the red shirt notching up another two, increasing its tally to 70 with Portugal’s national team, a record that will probably be held by him for many, many years to come.

But not only Ronaldo did his bidding. In fact, the other highlight is a player that, in the beginning of the season, was not even near Fernando Santos plans, but the lack of striker quality in the country – Eder scored the most historic goal of the nation but his quality is way below par – merged with the fact that he started his Porto campaign in a very emphatic way propelled Andre Silva to the starting lineup, making sure that the transformation from the ever present 4-3-3 to the 4-4-2 with Ronaldo and Andre as the main target man would be complete. And how well they combine! Portugal scored 19 goals already in this qualification campaign and the CR-AS partnership was responsible for 14 of them, and not only that it makes Portugal a harder team to beat. Before Andre Silva, as magical the likes of Nani, Quaresma, Joao Mario can be, they are not the most prolific goalscorers, but the Porto striker is exactly that, a striker. The goal he scored Saturday wasn’t the most beautiful one, but it was a poacher’s goal, reading Raphael Guerreiro’s perfect cross to just connect with a smooth tap in. And for Ronaldo’s first strike I would advise anyone to see the assist, a brilliantly played backheel touch in the air that completely disrupted the Magyar’s defence.

It’s relatively early to say if Andre Silva will be a world-class striker, but in a country where this position is one that is lacking, and where everyone knew that the goals would probably come from only one place, this duo might be the key for Portugal to keep battling for titles. Because after being crowned European Champions, Fernando Santos will want to avoid a drop like Denmark had after their Euro win, and for that new solutions need to be found, and it seems like this one could last for a few good years. As long as CR7 legs won’t give up on him.

A football geek that can answer what's the height of that non-league midfielder. With no ability to play the game, but a keen eye to observe it, I've had a minor role as an assistant manager at an U-13 team in Portugal (Belenenses) and did some scouting for CS Maritimo (also from Portugal), and have a need to be ahead of everyone in terms of who the next big star will be

The best replacements for Aubameyang across Europe