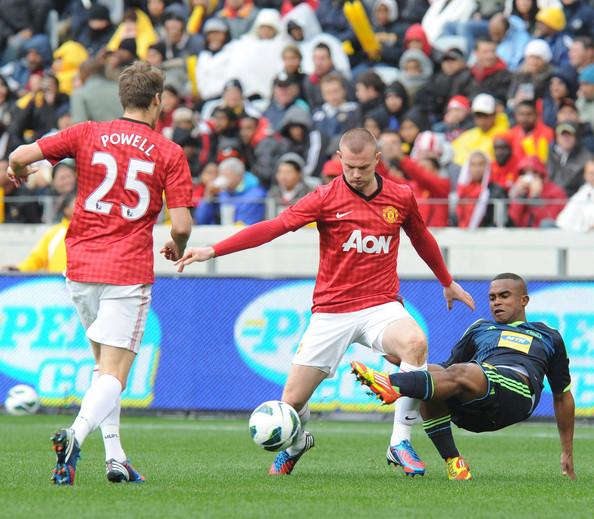 It’s been nearly two years since I profiled Ryan Tunnicliffe. He was about to embark on an important final season in the club’s Academy and was now a full-time professional. Off the back of an injury hit season in his first year as an U18, this was to be an important year for him as he formed part of an unstoppable midfield trio at youth level. Now on tour with the first team, what can be expected of Ryan this season?

As with any generation of young footballers, clubs, not just United, are lucky to get one or two through to the first team for a prolonged period of time. Therefore when fans looked at the United side that won the FA Youth Cup just over a year ago, it’s not too surprising that other players were singled out before Ryan. His part in that cup success though was huge and to some extent, unsung. Whilst others scored and made goals, Ryan was more often than not, the engine that did the running.

His style is what gets many fans excited – snappy, intimidating and sometimes a bit reckless, he’s not someone you’d want to come up against. That said, his loan spell at Peterborough had mixed success. Maybe he went out on loan too early or maybe he just wasn’t ready for the Championship. He ended up being recalled a tad early after some good, some bad and a lot of inconsistent performances. Upon being back at United he didn’t look sharp and was disappointing up until the last few Reserves games of the season.

What Ryan did get from Peterborough was a life lesson. By his own admission, he grew up and learnt what it was like to live away from home as well as play at the wrong end of a league where every point was fought for. As a person, he seems to have matured – something that’s been very evident in the interviews he’s given whilst on tour with the first team this summer.

The tour has given him the chance to be around, train with and play alongside a few of the club’s senior players. In his two cameos, Ryan’s not looked out of place and seems determined to take the chances that are coming his way. Far from being cautious, he’s played his own way and somewhat unsurprisingly is the only United player to be booked on tour thus far!

Having dismissed murmurings that he was a City fan a little while back, Ryan seems to completely understand what being at United is all about. This, added with the fact that the first team could do with a player in his style right now make him extremely likeable.

For a while I’ve privately thought that Tunnicliffe has a good chance of having a career at United. A bit like Gary Neville, he’s not the most naturally talented or gifted of players; however what he has is determination and an excellent attitude towards learning and improving. It’s this that makes me think he has a chance but this next season will be important.

Ryan turns 20 before 2013 arrives and will physically be closing in on his final height and build. United must judge very carefully what the next steps for Ryan are. Keep him and play him in the Reserves with snippets of League Cup action? Probably not, he needs to be tested more than that but he seems to flourish most when at the club. Loan him out? More likely and more sensible, certainly in the Championship until January anyway.

With his contract expiring in a year, it would be a surprise if he wasn’t offered an extension at some point soon. What Ryan will need to do to justify it though is show he’s more than just a runner and a tackler. Today, players, particularly central midfielders, are required to be more than adept when in possession – something that’s been highlighted for Ryan to improve on for some time now. With the game shifting towards a focus on technical footballers, some pundits and coaches think the age of tackling is over. For many players, mental progression and maturity are important at this age but for Ryan it’s very much the finer aspects of his game.

There’s just one game left on tour and it would be fantastic for Ryan to potentially start and show that his passing and intelligence have come on and improved. Reflecting upon that profile I did two years ago, a lot of it would feel quite applicable today – his strengths and weaknesses remain the same and once again I think he’ll be one to keep an eye on. It may be too early to expect a ‘breakthrough’ year for him but these inroads, even in pre-season are encouraging. As one all-rounded, tough, home-produced central midfielder sadly succumbs to illness and maybe the end of his career (too early), another’s hopefully emerging.