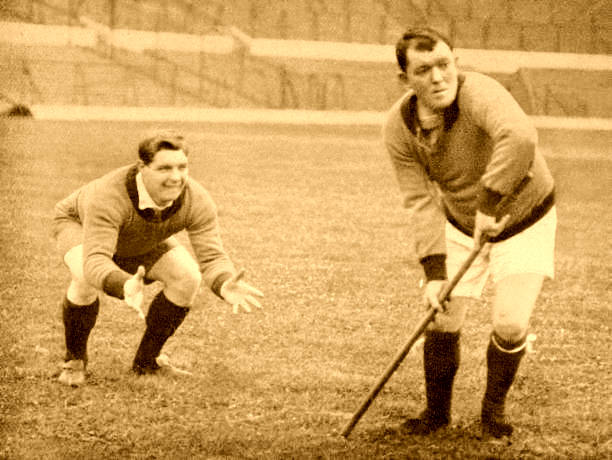 Born in a small village outside Kilmarnock in Scotland, Sandy was destined to work in the mines. Just as his father had done and many other working men in the area. But Sandy had grown up with a talent few other possessed.  A century before football players were millionaires and lived the high life, Sandy played football for the love of the game. This is the story of the working boy that became Old Trafford’s first superstar. This is Sandy Turnbull.

When Sandy was only 16 years old his father died and he had to work in order to give his family, which included his mother and six other kids, food on the table. He took a job in the coal mines and played football on the Saturdays. Back in those days, football was a relaxing distraction for the workers. A distraction to help them think about something besides the hard life they were living. He played for the local club that ran by the name Hurlford Thistle. It wasn’t any good team and sometimes the players even played in their working boots.

But things would change for Sandy. The English Football League was blossom and the professionalism was growing stronger for every year that passed. In 1902, he signed for Manchester City. Scottish players were prized and hunted in those times and City offered him a weekly wage of 3 pounds.

In 1906, he won the FA-Cup for the first time. Manchester City possessed many good players at this time. This included the dribbling genius, Billy Meredith. Nicknamed “Football wizard” he scored the only goal of the final against Bolton Wanderers. But things would turn around fast and when Billy Meredith admitted he had been given illegal win-and-drawn bonuses from Manchester City is started a wave of consequences. Billy left for Manchester United and Sandy would soon be following since him and seventeen other players in City were suspended from the club for receiving these illegal payments.

Manchester United’s manager at this point was the strict and moustache dressed, Ernest Mangnall. He is widely considered to be Manchester United’s first successful manager and a person with the eye of talent. Bringing both Billy and Sally to United was going to be a successful move. Billy delivered the balls and Sandy scored them. United won the league in 1908 and 1911. They were also crowned the champions of the FA-Cup in 1909. After the triumph in 1908 the Manchester Evening news wrote this about Sandy;

“A man of big shoulders and quick feet and active brain, ‘Sandy’ is a great player, and a more unselfish inside man I never saw. A great opportunist with class written all over his football.”

The praises kept coming for Sandy and his relationship with Billy was something other than the usual. In November 1908, the Manchester Guardian said this about the partnership;

“When Billy lifts the ball across the goal there are invariably three of his partners in a line ready to receive it and generally it is ‘Sandy’ Turnbull who puts the finishing touch to Billy’s artistry.”

But he also had the temperament of a bulldog. Just a couple of days before Christmas in 1907, he became the first player to be sent off in a Manchester derby. He had been in the centre of attention during the whole game since he scored two amazing goals for his new club. But in the second half, he punched Joe Dorsett to the ground and had to leave the pitch. This was multiple decades before the yellow and red cards were invented and back then it wasn’t that usual for a player to be sent off since the referee’s acceptance was considerably higher than it is today. Once again Manchester Guardian wrote about the challenge that made Sandy historic in perhaps not the most flattering way.

“Sandy Turnbull and Bill Eadie made themselves ridiculous early in the game by repeatedly making grimaces at each other and, in the second half, Turnbull lost self-control so far as to strike Dorsett to the ground. He was promptly ordered off the field by the referee.”

His stubborn style of play was not only for the bad. Before the final of the FA-Cup in 1909 he got injured but instead of resting, he played in the final and scored the winning goal against Bristol City. A supporter chant was sung to his honour on the terraces and he was probably one of the first players to gain an own supporter chant. The song went like this and was focused on the fact that he played the final even though he was injured.

“Why we thought you were ‘crocked’ Dashing Sandy.

That to fame your road was blocked, Hard Lines Sandy.

But you came up to the scratch,

Made an effort for the match.

There were groans heard near and far, Deep ones, Sandy.

But the ball was on the bound,

And your boot was safe and sound,

When the net your great shot found, Champion Sandy.”

On the 21st of February 1910, Sandy scored the first goal ever on Old Trafford. This happened in a game against Liverpool FC. This is how one of the newspapers in Manchester described the goal.

“Duckworth took a free-kick and skilfully dropped the ball some 10 yards or more from the goal-mouth. A Turnbull rushed in with lowered head. The ball was within a foot or two of the ground by the time he got it but he met it with that extra-durable head of his and drove it hard into the goal.”

United lost the game but the largest memory from that game was Sandy Turnbull’s magic header which earned him a place in the history books.

During this period, the first player union were moving forward to help players secure their rights. Sandy and the whole Manchester United team were banned from playing for a short period since they refused to leave the union. At last the union won the battle and helped to raise the players maximum wage from 3 pounds per week to 4 pounds. But even though it was a victory, the extra pound didn’t make life much easier. When several Manchester United and Liverpool players got together to fix a game between these two sides, the first betting scandal in the history of football was a fact. Sandy was one of the main players behind the match fix and he earned a lifetime banned from football in 1915.

But this was the least of his problems. The First World War was well underway and Sandy would soon find himself in the trenches and mud of France. The last known picture of Sandy alive is the photo that was attached to a postcard his wife got in the early days of 1916. On the picture, Sandy is posing together with some fellow soldiers on a beach somewhere in Britain before their departure to France. The text that came along with the picture said, “Wishing you all a Happy Easter, best love, Sandy.”

He was most likely transferred to the East Surreys to assist the British troops whom had lost large numbers of soldier in the big battle of Somme. Exactly when he died isn’t known. When his battalion made a night-time offensive against the village of Chérisy, which cost many soldiers’ lives, it is most likely that Sandy Turnbull’s journey ended. Of the around 500 soldiers in the battalion who attacked Chérisy, 90 soldiers were killed, 175 wounded and more than 100 captured. But exactly how this happened isn’t clear. The reports about Sandy’s and many others death is very scanty. There was however a notice in the local newspaper of his hometown on the 18th of May 1917. It read like this;

“Sandy Turnbull, famous Manchester United forward, and a native of Hurlford, has been wounded and made a prisoner. He has been fighting for about a year. The information was conveyed in a letter from a comrade, received by Mrs Turnbull at her home in Stretford.”

Mrs Turnbull also received this from the front. “Turnbull was missing during an attack on the Germans. I have very little hope of him being alive. I spoke to him when he got is first wound and asked him if he was badly done ‘No’ he said, and from all accounts he must have continued going along with us, and when last seen had four separate wounds.”

Sandy didn’t let anyone down. Not at the front and not in a FA-Cup final. Even if he was wounded or injured he always moved forward and that is something everyone will remember him off. He was an honourable teammate, soldier, friend, father and husband. And he will of course always be remembered as the person who scored the first goal at Old Trafford.