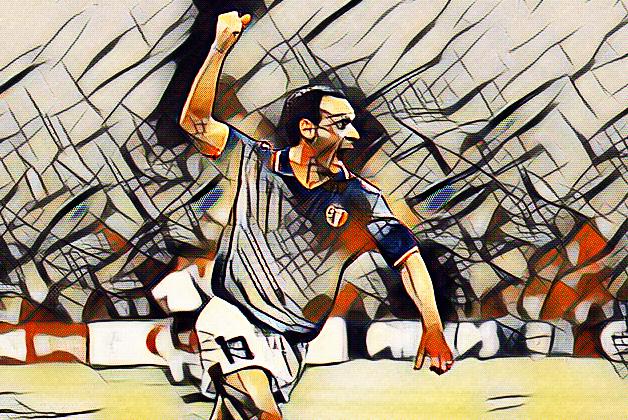 They say the ‘brightest stars burn out the fastest’. In the case Salvatore ‘Toto’ Schillaci his star shone blindingly for four weeks in the summer of 1990.

Host nation Italy began their World Cup campaign in Rome’s Stadio Olimpico against Austria. Salvatore Schillaci took his place on the substitutes bench. Ahead of him in the starting line-up were Gianluca Vialli and Andrea Carnevale. Beside him amongst the substitutes were Roberto’s Mancini and Baggio. A somewhat surprising call-up to coach Azeglio Vicini’s World Cup squad the once-capped Schillaci would have a fight on his hands to get ahead of his esteemed striking colleagues, but Toto was no stranger to a struggle.

Inner-city Palermo was a difficult place to grow up in the 1960’s and 70’s when Schillaci was a youngster. At that time the city was effectively run by Sicilian Mafia. Poverty was common-place and there were no parks or football pitches on which young Toto could play. Restricted to playing on a street corner Schillaci managed defy the odds and progress to playing for a local amateur side. It was there hat he was spotted by Sicilian club Messina, then playing in Serie C2.

Seven successful years at Messina saw the side reach Serie B and Schillaci’s goals had thrust him into the limelight. Just 12-months before the 1990 World Cup finals the front-man’s form secured him a £3 million move to Juventus. It was his 15 goals at the Bianconeri that drove the boy from the street corner into contention for a place at his country’s World Cup squad. His inclusion in the squad wasn’t without question though as his background, rather than his ability, was an issue for some.

The North and South of Italy has long been divided along financial lines. The ‘rich North’ looking down on the ‘poor South’. Such is the geographical snobbery that the mainland as a whole often doesn’t look upon Sicily as being a part of their country at all. This deep-seated divide led to many questioning Schillaci’s inclusion in the squad and his right to represent his country as an ‘Islander’. The feeling among some, particularly in the wealthy north, was that it was an affront for the country to be represented by someone form one of the poorest areas of Sicily.

It was day two of the tournament as the hosts lined up against Austria. Italy were hoping to avoid being on the receiving end of a shock defeat. Argentina had been the victim of a shock the previous day against Cameroon. The Olimipico, packed with an expectant 73,000 crowd, trembled with excitement, anticipation and as the game went on, nerves.

In a relatively uneventful match the Azzurri dominated although they struggled to put away their opponents. The home advantage becoming something of a hindrance as nerves spread from stands onto the field. With fifteen minutes remaining and the game in the balance at 0-0, coach Vicini sent on Schillaci.

Just minutes after taking to the field the diminutive front-man got himself between two Austrian defenders on the edge of the six-yard-box. Vialli twisted and turned on the right before clipping a cross towards Schillaci. Toto then powered a header beyond Austrian goalkeeper Klaus Lindenberger for the winning goal. An explosion of noise within the Olimpico was filled with relief as much as joy as the Italy number 19 was mobbed by his team-mates.

An un-changed Italy strike-force struggled by the USA 1-0 their second game prompting Vicini to change his starting line-up. He fielded Schillaci and Baggio up front in a new-look line-up against Czechoslovakia. What followed was the Azzurri’s best performance of the competition so far. Schillaci heading in an opener before Roberto Baggio added a second with the goal-of-the-tournament.

The home nation was into the knockout phase and Schillaci was an instant hero. It wasn’t just in his homeland that Toto had become a household name. A combination of his scoring exploits, his wild-eyed celebrations and the feeling that he had seemingly come from nowhere, spoke to football fans watching all over the world. In the days before social media it wasn’t as easy to follow other leagues and those that played in them. The big names were known worldwide but fringe squad players, which Schillaci was, were not so well known outside of their own country.

Italy were drawn against Uruguay in the round of 16. Schillaci kept his place and the side and again the Sicillian delivered. After receiving the ball outside the 18-yard box Schillaci held off two Uruguayans as he fired an unstoppable shot into the net. The Azzuri had a new talisman. They hoped his impact would have similar results to their 1982 World Cup winning striker Paolo Rossi. The celebration of that goal, with Roberto Baggio swinging a wide-eyed Schilliaci around by his blue national team shirt, was one of pure joy.

Republic of Ireland fell to Schillaci’s amazing run of form in the Quarter-Final. The hosts reached a last four berth with a 1-0 victory courtesy of Toto’s cool side-foot finish. In a tournament which produced several break-out stars it would be the Italian who would be many neutrals favourite player in the tournament.

It was his enthusiasm and passion as much as his ability that so was infectious. The look of joy when he scored seemed to have an air of surprise to it, as if he himself couldn’t quite believe what he had just done. The dream would end in the semi-final though. Italy would fall to reigning champions Argentina in a Naples penalty shoot-out. Schillaci scored his fifth goal of the competition in that game and added another against England in the Third-place play-off to secure the tournament’s Golden Boot.

Those four weeks in 1990 would represent the pinnacle of Schillaci’s career as he almost led his country to the ultimate prize in football. Six goals in seven matches, two of which he spent the majority of on the bench. This was an amazing return from a player not expected to feature much in the tournament at all. Indeed, the rest of his career panned out much more in line with the pre-tournament expectations for Toto than the post tournament buzz around his name.

The goals dried up for Toto the following season as Juventus uncharacteristically struggled in Serie A. A move to Internazionale of Milan did little to help Schillaci. Toto became something of a joke figure amongst the fans there as he was regularly jeered during matches. The old geographical bias again coming to the fore. His World Cup heroics seemed a long way off as Toto left Italy to play in the Japanese ‘J League’. He spent a somewhat fruitful three years there, scoring 60 goals in his time.

Retirement has brought reality television appearances, the opening of a football academy in Sicily and a change in appearance that has seen him look younger now than he did in his 1990 hey-day. The cropped receding hair-style of the 90’s has been replaced with a dark hairpiece changing his appearance at a glance.

The short haired, wild-eyed Toto of that summer of 1990, is how Salvatore Schillaci will always be remembered. In musical terms he would be classed as a one-hit-wonder. The tune played by Toto was so memorable though, that his face would always be recognised. His star shone brightly that summer but as the saying goes, it burned out fast.