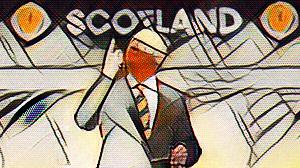 International friendlies are often bemoaned by many as club football is forced to take a break, but for Scotland manager Alex McLeish, the next couple of days represent a key period for the Scotland national team, as they host Costa Rica and travel to Hungary for two hugely important fixtures in their bid to recreate successes of old.
McLeish begins his second spell in charge of the national team, having previously taken charge of the side in 2007, where he was victorious in seven of his ten games.

The former Rangers and Birmingham City manager boasts the highest win percentage (70%) of Scotland managers to have taken charge of ten games or more, while his 1-0 defeat of France in the Parc des Princes in Euro 2008 qualifying remains one of the national side’s greatest ever victories.

Speaking of his current squad though, the manager explained his reasons for choosing less-experienced players such as striker Oli McBurnie and Wolves full-back Barry Douglas over the more-experienced members of previous squads, including James McArthur, Robert Snodgrass and Chris Martin.

“These guys have been playing very well for their clubs,” said McLeish. “When you take a team together for the first time, you don’t have that rhythm that normally you would have, but I think there’s a great enthusiasm.

“We have to be organised, and we want the guys to show how good they are as footballers,” he added. “We’ll try to get the rhythm as quickly as possible.”

This youthful outfit certainly have a long way to go to match the standards of their European counterparts, but McLeish believes a winning mentality is central to any success going forward.

“We have to find a way to be consistent winners, it’s the only thing that will get us to the finals,” said the manager. “It’s not something to worry about, it’s something to face head on.

“We want to qualify for the Euros, that is our number one goal, we will never have that out of our minds.”

There may however be extra incentive for the 59-year-old, who comes up against an old foe in Costa Rica manager Oscar Ramirez. The pair battled it out on the pitch all the way back at the 1990 World Cup in Italy, with the Central American side shocking their Scottish counterparts with a 1-0 victory.

McLeish also explained his decision to appoint Blackburn Rovers defender Charlie Mulgrew as captain for the upcoming friendly at home to Costa Rica, with the former Celtic man given the responsibility after Scott Brown’s retirement and Darren Fletcher’s absence from the squad.

“Charlie is a good leader, and deserves to be captain,” explained McLeish.

Mulgrew will win his 33rd cap in Glasgow, and expressed both his shock and pride at receiving the honour, and looks forward to leading his side out onto the pitch at Hampden.

“I grew up watching Scotland so to be captaining the team is great,” he said. “I’m very honoured.

“Every game is important for your country. Every time you turn up, it’s an honour to pull on that jersey.”

The most experienced outfield player in the side then expressed the importance of the youngsters in the squad, with Manchester United midfielder Scott McTominay expected to play a part in the upcoming friendlies.

“He’s been doing brilliant with his club, let’s just hope he can do the same for us,” said Mulgrew. “Hopefully he goes on to have a lot of caps for his country.

The 32-year-old explained his frustrations at how the 2018 World Cup qualifying campaign had ended, but is fully aware of the talent coming through the ranks for the upcoming games.

“We did very well, ended up playing some really good stuff, we were very unlucky in the end.

“Every position there is quality coming through, these are exciting times ahead.”

With a starting 11 in mind for the Costa Rica encounter, McLeish is searching for a top performance from his side, but essentially wants to win the upcoming friendlies in order to build that much-needed confidence within the ranks.

“When we look at the squad, there’s a good presence in terms of stature. We have skilful players, quick players, good energy, and we’re trying to help them in terms of total preparation for a game.

The home tie with World Cup participants Costa Rica represents an important stepping stone for McLeish and his men as they enter a new era for Scottish football, one that aims to bring back the glory days that the nation have been craving for far too long now.