Skip to content
Posted in Interview By By Far The Greatest TeamPosted on August 15, 2012August 12, 2012Tagged Tottenham Hotspur 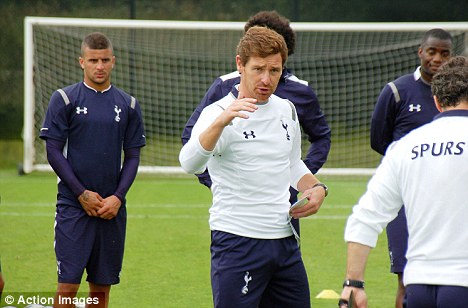 Spooky: Quantify success because it tends to get confused with progression. A successful season would be winning silverware because historically that equates to something tangible. However, with football being the beast it is, we tend to embrace the aforementioned progression as something to celebrate. I’m hoping our ambitions are stronger and more focused than they were under Redknapp. Top four would be great, the return to Champions League, wonderful. But a cup would live on in memory forever.

S: I’m a Spurs fan. Are we ever truly happy with transfer windows? We’ve done great in completing two deals very early on but the Modric saga continues to bore the life out of me and we still need two forwards to be signed. It’s imperative the excuse of ‘lack of rotation due to lack of depth’ does not find itself dancing an ironic jig of disappointment at us by Christmas. I’m going to commit to something here and state: We’ll sign everyone we need to sign. Why? Simply because if we don’t, we’ve got an up hill struggle to compete with the very top tier sides.

S: With King retired, I’d say Jan Vertonghen has responsibility at the back but it’s unfair to look at a brand new signing as the key man. Parker is recovering from an op and with Modric in limbo I’ll have to opt for Mr Gareth ‘will he stay on the left or roam with discipline’ Bale. Potent weapon, beastly with rampant pace, has to be used effectively. I’m hoping the shrewdness of Villas-Boas caters for unleashing Bale on opposition defences with more impact than last season. But then it’s dependent on the player upfront to put away the crosses. Can’t help but think its going to be a collective responsibility rather than an individual one.

S: We all know what he achieved at Porto. We all know the naivety and politics he experienced at Chelsea. If he stays true to his word and doesn’t attempt to overhaul and simply tweak and improve the areas that need fixing – then the logic is, we’ll get better. He’s already got us working on set pieces. Where Redknapp lacked tactical astuteness and deceive changing, we have to hope VB doesn’t. It’s still important that Levy comes up trumps with signings. Not enough bullets in the gun means we might not hit the target enough.

S: Lesser of two/three evils. Man United. Because we’re all comfortable with them winning it. Chelsea, City, Arsenal…that is hardly a comforting thought. I’d love to say Spurs, but then I’ve got to work my way through a bottle of rum first. Ask me again in an hours time.